ONCE THEY HAD two goals on the board after 11 minutes, there was a degree of inevitability about Dublin’s march to another Leinster senior final win this afternoon at Croke Park.

Underdogs Kildare may have notched the first point of the game courtesy of Daniel Flynn inside the opening seconds but when they shipped goals in the 10th minute to Dean Rock and less than a minute later to James McCarthy, the Lilywhites were in trouble. 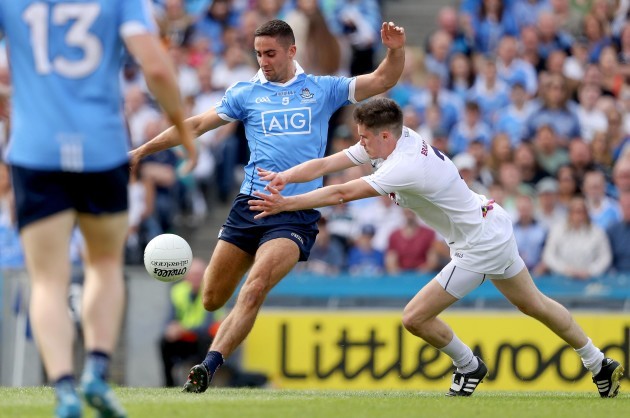 To their credit, they rallied impressively before half-time. After 20 minutes Kildare trailed 2-4 to 0-1 but by the break had cut the gap to 2-8 to 0-10. Points from Johnny Byrne and Daniel Flynn were the pick of the bunch during that scoring spree. 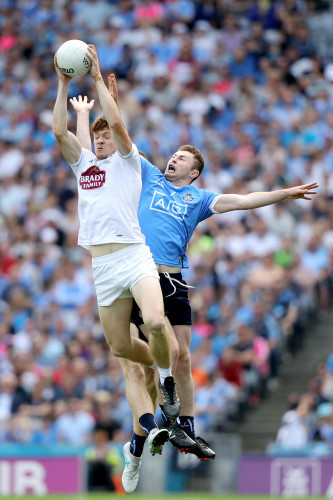 However Dublin took over after the interval. With Rock having departed the action following a black card in the 23rd minute, Con O’Callaghan deputised in style as he wound up with a tally of 0-12 – six of those points from dead balls.

Bernard Brogan seized his chance when coming on for Rock as he finished up with 0-5 from play.

Kildare had a glorious chance to hit the net in the 42nd minute when Daniel Flynn burst through but Stephen Cluxton was equal to his close-range shot.

It was 2-11 to 0-11 at that juncture and then Dublin kicked six of the next seven points in the game to move out of sight.

Kildare kept pushing until the finish and they did manage to raise a green flag deep in injury-time when Paddy Brophy gathered a high delivery from Eamonn Callaghan before nudging the ball to the net.

Yet the game concluded with Dublin nine points clear as they reigned supreme in Leinster once more.