WHAT WILL BREXIT mean to your pocket? That was one of the questions addressed at the MacGill Summer School in Glenties, Donegal this morning.

Speaking to a packed room, Sinn Féin’s Pearse Doherty said it will ultimately result in everyone paying custom tax with VAT on top of that.

There are people behind the hundreds of discussions about Brexit, he reminded the audience.

“Let’s not forgot that behind all this data around cross-border trade, there are real people, real jobs, real wages and real livelihoods at risk. It’s trade by which it’s estimated some 200,000 people are employed directly and depend upon,” he said.

Should the “Tory/DUP vision for Brexit” come to pass, we will have to contend with customs obligations, said Doherty.

What is today considered to be the routine trip into the north to shop will be subject to new and heightened tax implications.

For us, the trip into Derry or Belfast to buy that new TV or laptop will, post-Brexit, see duty on those goods being subject to customs duty, plus VAT.

During the recession, countless shoppers drove north of the border to avail of cheaper prices.

That will be a story of the past, with Paul MacFlynn, Senior Economist at the Nevin Economic Research Institute, stating that the absence of tariffs on goods cannot be underestimated.

MacFlynn said exiting the customs union would be detrimental to people north and south of the border, adding that the UK and Europe must agree to frictionless customs arrangements to facilitate trade across the border.

This week, the minister ruled out the use of electronic tagging along the border after Brexit. 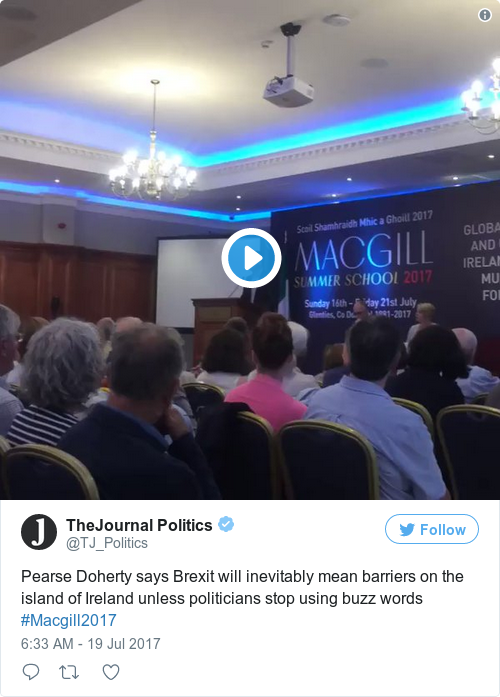 The discussion soon turned to the influence that Sinn Féin could have on Brexit from Westminster, with one audience member asking Doherty why his party was sticking to its abstentionist policy.

She understood it would be difficult, but put forward the idea that Sinn Féin MPs could take their seats in London “just this once”.

To take seats in Westminster, successful Irish MPs would have to take the oath of allegiance to the Queen. Because of this, elected Sinn Féin MPs do not take their parliament seats.

Doherty said Sinn Féin was using its influence on matters relating to Brexit.

He said some people would like to see Sinn Féin MPs pledge allegiance to the Queen – but they won’t be doing that. 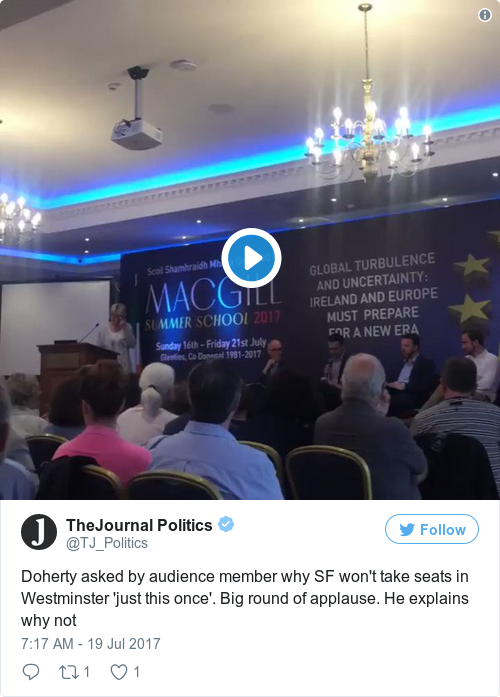 Doherty asked by audience member why SF won't take seats in Westminster 'just this once'. Big round of applause. He explains why not pic.twitter.com/eIOtNht6BZ

He added that the majority in Westminster was in the hundreds, and that the seven Sinn Féin MPs taking their seats would not make any difference to the political landscape in the UK.