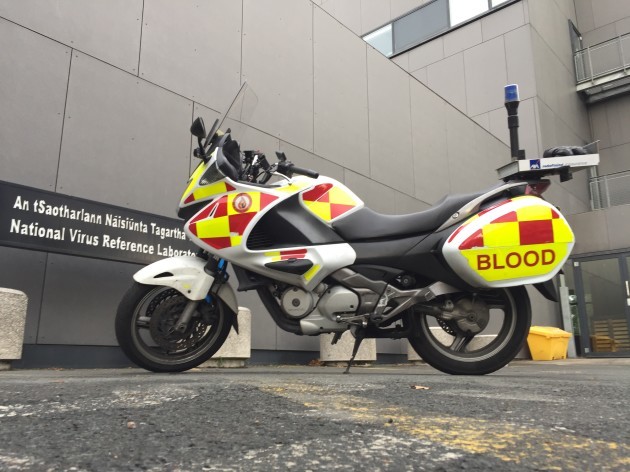 YOU MAY NOT have heard of blood bikes.

You may not even have seen one, though the entirely volunteer-run service is becoming more and more prevalent. But some day you may be very glad it exists.

Blood Bikes East (BBE) was first conceived of in 2012, following a format that had proved hugely successful in the UK since the 1960s.

The service is deceptively simple. BBE itself (the Dublin bikers have six registered sister services around the country – BB Leinster, South, West, Mid West, North West, and Cú Chulainn Blood Bikes, all trained to the same high standards), has six high spec motorbikes on call outside working hours to make crucial deliveries (primarily blood samples, all manner of other medical supplies also, even breast milk – the service’s remit is a broad one) either between or to hospitals in the greater Dublin area. Think of it as a high-end courier service with a very specific clientele.

The machines themselves are styled in a fashion not dissimilar to Garda bikes, with each bike specially adapted to transport medical supplies.

And the service has just reached a landmark – it’s 10,000th delivery. Given the rate of growth in demand for the bikes it won’t be long before it clocks up 10,000 more.

To celebrate the charity is holding a giant day event on 16 September in north Dublin, with over 1,000 people set to attend.

That’s a turnout that shows the esteem in which the riders are held.

44-year-old New Zealander Paddy Crawford has been volunteering as a blood biker since 2014.

A sales rep by day, Crawford doubles as BBE’s chairperson as well as being a fully-signed up volunteer (one of 108, the vast majority of them riders, that BBE now boasts).

“The majority of us are bikers, trained to the highest level a civilian can be,” he tells TheJournal.ie.

I’ve loved them since I was four myself. BBE is just a great way to combine that passion and give back to the community at the same time.

BBE operates between the hours of 7pm and 6am Monday-to-Friday, and 7pm on Friday evening until 6am Monday morning. The bikers work all public holidays to boot. 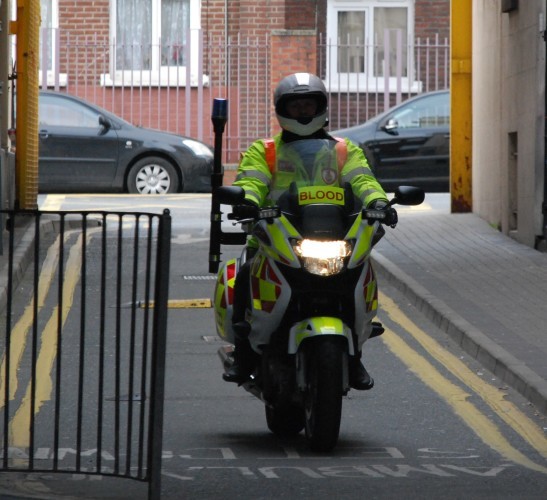 From small beginnings, the bikes have sprouted in popularity with the hospitals they serve. The organisation estimates it’s saved Dublin hospitals €665,000 in commercial courier charges in the past five years. A figure not to be sniffed at.

“We’re a charity, we’re speedy, we’re fuel-efficient, and we mean that money spent on taxis can instead be put back into frontline services,” says Crawford.

“We’ve the highest possible standards on bikes, the RoSPA Gold – and every one of us commits to reaching that level, with an AON Level 2 riding qualification the absolute minimum we expect and an application for RoSPA to be made within six months of joining,” Crawford stresses.

We’re trained to the absolute highest possible standard you can be.

Strangely enough, high winds, not rain, are the biggest enemy for these particular bikers.

What kind of things has Crawford transported?

“It depends, a lot of this is done on the fly. A lot of breast milk for premature babies, specific surgical face masks also for premature arrivals, supplies for kids undergoing chemo, a lot of time-critical medication, it really varies,” he says.

Last Christmas, BBE liaised with its sister organisation Blood Bikes South (in such situations the bikes meet at a halfway point) to bring a specific kind of stent (a tubular device used to maintain the flow of blood through an artery) from Cork to Dublin where a child was waiting to undergo brain surgery.

A day in the life

A typical day will see the rider (every volunteer is expected to cover at least one shift per month) arrive at the lockup, collect his or her bike (for the bike fans among you the service uses four Honda Deauville 700s, a Honda Pan European 1300, and a Kawasaki GTR1400 – they also have a couple of covered vehicles for bad weather conditions and larger deliveries), check in with their controller, and then go home. 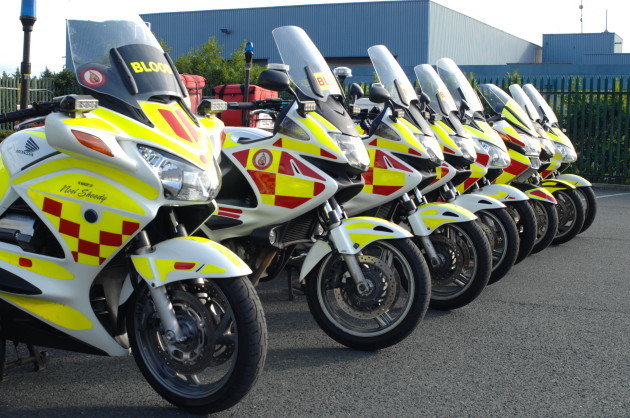 For BBE, each shift means having two city riders (one northside, one southside) and one country bike on duty – that rises to three city riders at the weekend.

Once the rider is home, they wait for the call.

“The hospital will call our control and we’ll take the job on,” says Crawford.

We have shift patterns, but if an emergency happens during working hours – and it does happen – we’ll take that on as well.

All that leads to an elite service with a fuel bill (funded by corporate donations – the charity runs entirely on goodwill) of about €1,000 per month. By contrast, a taxi ride between Donegal and Dublin could cost €400.

“All of us work during the day,” says Crawford. “We have no paid employees at all. And we never will.”

Which means one of Ireland’s elite medical units operates for free.

In an era of perpetually underfunded health services, that certainly qualifies as a good news story.

Read: Ireland will soon have a direct flight to one of Asia’s most famous cities