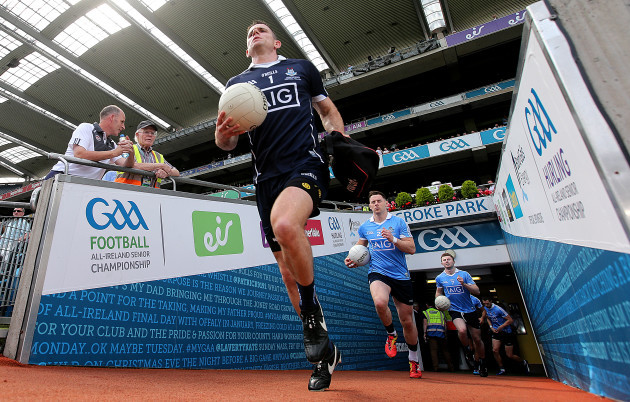 STEPHEN CLUXTON MATCHED Marc Ó Sé on 88 appearances at the weekend and with the form that Dublin are in, it’s not inconceivable to imagine him reaching the 100 mark.

He has also managed to kick 48 points in that time and kept 50 clean sheets.

Cluxton has completely changed the role of a goalkeeper in the game and you could argue that his and Dublin’s strategy to go short was a key driver in the implementation of the new mark rule.

Perhaps one of the most fascinating things about Cluxton is his ability to adapt to changes in requirements and tactics.

I’ve picked out his 2012 kickouts in the image below. 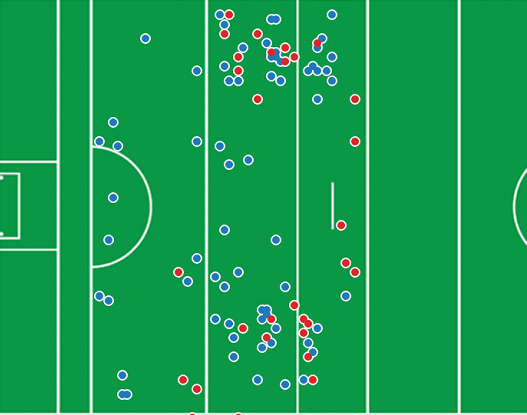 80% were kicked beyond the ’45, while just 20% landed inside the Dublin ’45. He would have spent a large part of his early career kicking long kickouts. His ability to find runners is simply second to none.

But through retreating defences and more emphasis on keeping possession at all costs, the kickouts started to go short. 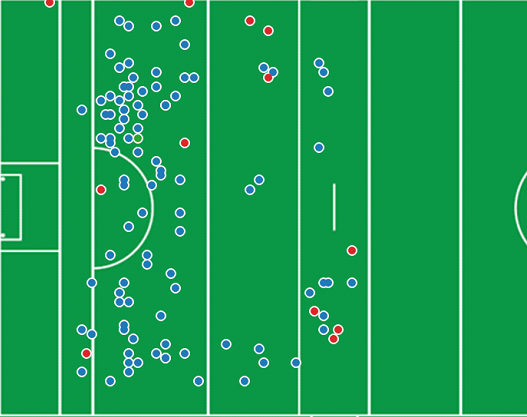 It’s almost a complete reversal in terms of kicking distance. At times Dublin would just go short because the opposition had completely retreated and at other times they wanted to keep the ball at all costs.

But as the tactics changed, so did Cluxton.

Through the years Cluxton has adapted to different styles of defence, teams who have pushed up or dropped off but his ability to find a man and keep Dublin’s retention rate well above 70% has never wavered.

And now we reach another iteration of Kickout strategy. Whether it’s because of the mark or that teams have just decided to compete again at kickouts is up for discussion, but one thing is for sure – Dublin are being forced to go long more often in 2017.

Dublin won 21 of 27 kickouts yesterday in Croke Park, which by any normal standards is a very decent return. Kildare did a better job of forcing him long in the second half. He kicked six out of 11 in the first half short, while just three out of 16 went short in the second half.

But like Cluxton has done in every previous season, his ability to just play what is in front of him, without any obvious patterns or pre-meditation is what separates him.

On Sunday as Kildare pushed more and more forward he simply kicked over the whole lot of them to launch Dublin attacks.

Kildare are committed here and have pushed up. There are nine outfield players in shot. 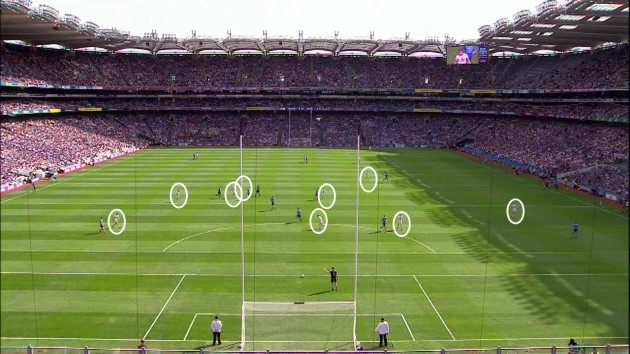 Dublin are masters of creating the space and it’s Con O’Callaghan who Cluxton picks out. 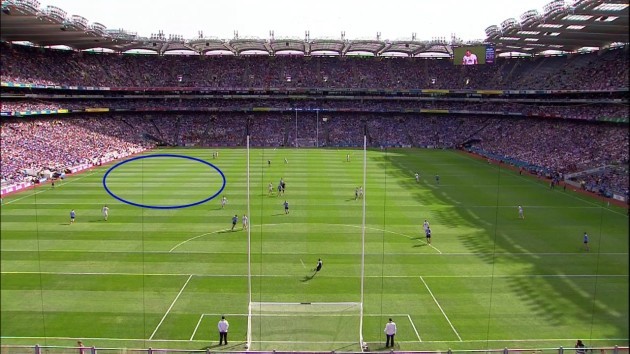 O’Callaghan and Cluxton have found a big pocket of space and the ball has cleared at least seven Kildare outfield players. 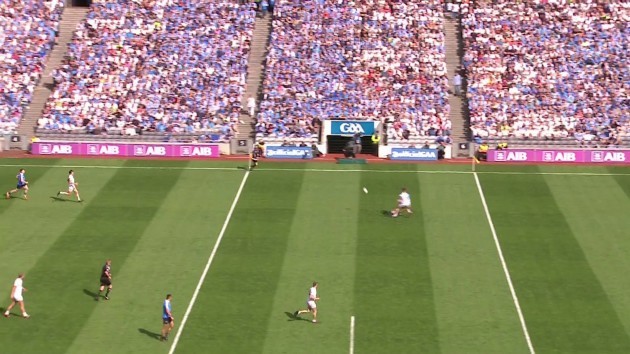 A few minutes later we see an almost identical move. Kildare have the squeeze on with nine men marking inside the Dublin half and no sweeper at home. 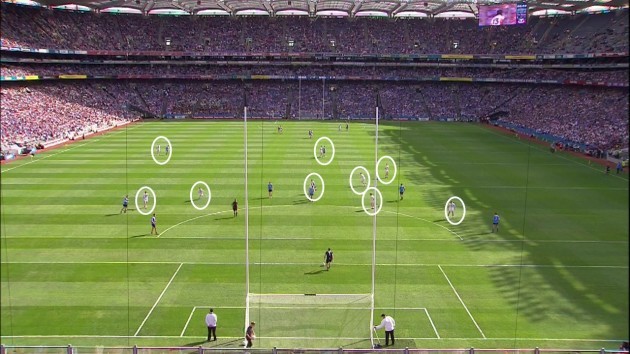 It’s the movement out of the space that is often missed by the TV cameras. Here it’s Ciaran Kilkenny who makes a run that forces Kildare further up the pitch. 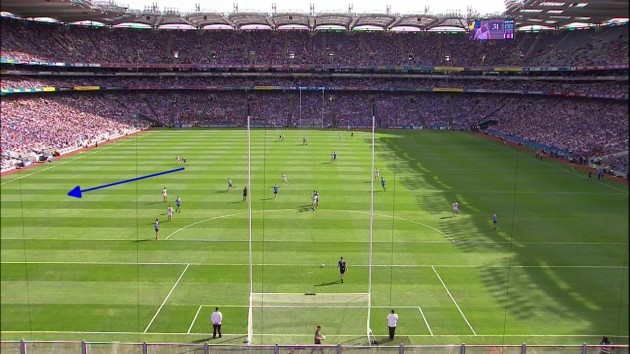 Cluxton kicks right to the space that has been created. 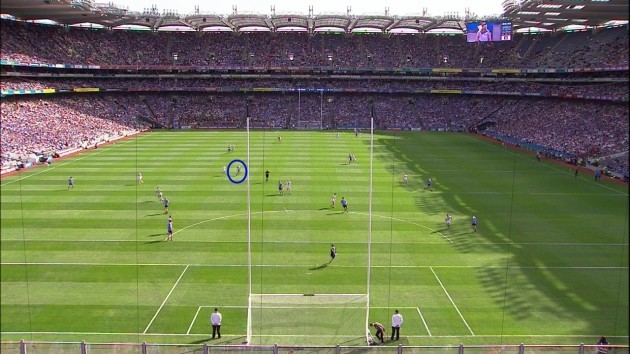 I’ve marked the initial runner to show that he made not one but two runs to get out of the space.

The ball actually beats O’Callaghan and his marker but O’Callaghan is quickest on the turn and launches a Dublin attack.

Kildare scramble back and the attack comes to nothing but it shows the options that Dublin always have.

This last example is at the very end of the game but again I think it highlights the options and determination of this Dublin team to just keep going for it.

Rather than be content with just keeping possession for the final few minutes they are always pushing for more scores.

Kildare are chasing the game at this stage but have committed 12 outfielders inside the Dublin half. 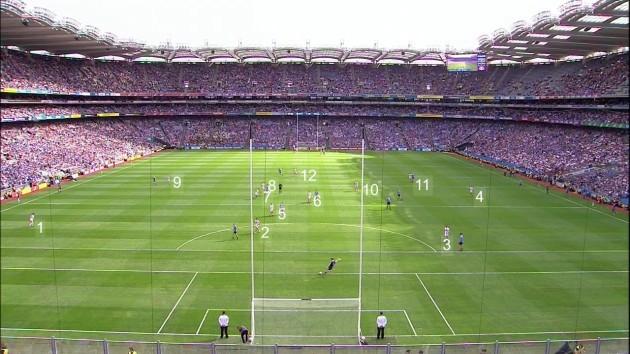 Cluxton simply kicks over everyone. As the ball travels you can see the spine of the Kildare team are cleared with a monstrous kick.

The ball will land inside the Kildare ’65. Keith Cribbin is running towards his own goal with the ball dropping over his shoulder and Brian Howard is breathing down his neck. 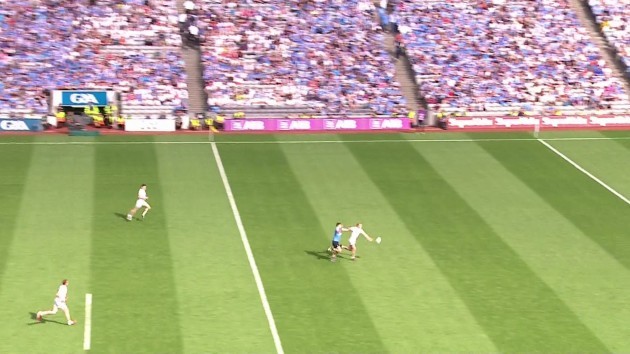 It was a clear goal scoring chance although Howard chose to take his point. 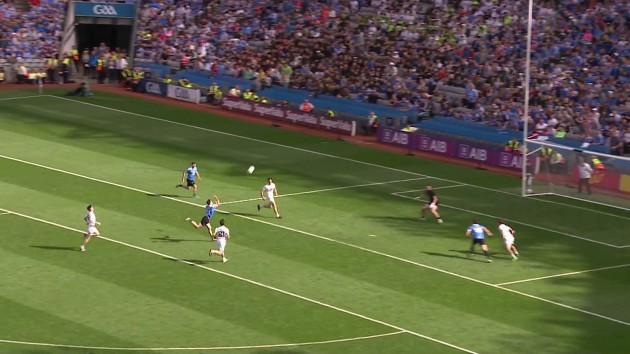 Dublin went really long like this on four occasions in the second half and turned three of them into scoring opportunities.

What this does however, is sow a seed of doubt in future opposition teams. Kildare had some early success on the Dublin kickouts but as the game progressed Cluxton and Dublin adapted and developed this long option.

Now if you are Mickey Harte or Eamonn Fitzmaurice, it’s another element you have to consider when examining his kickouts. 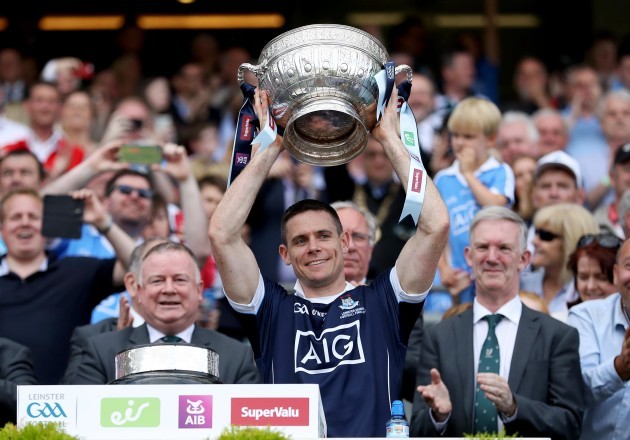 Marc Ó Sé probably summed up Cluxton best in his column in the Irish Mail On Sunday at the weekend.

“The feet we should marvel at today is not that he has equaled an all-time appearance record, but that the more we have seen, the less we have been able to get a handle on him”

From season to season and game to game, no matter how many hours of video you pour over, you will rarely find a chink in Cluxton’s armour.

He constantly seems to have a strategy to adapt and just play what’s in front of him.