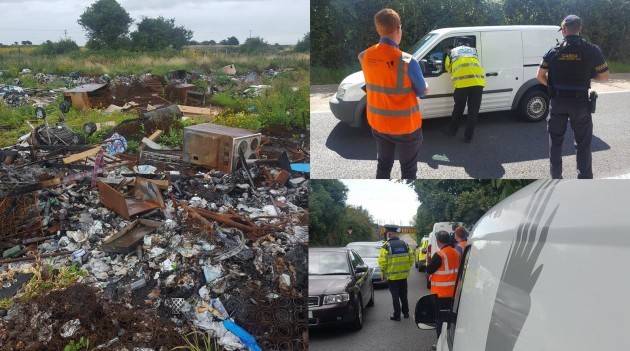 The council made a number of seizures this week and is now working to identify the owners of the rubbish.

GARDAÍ HAVE THIS week been carrying out a joint operation with Fingal County Council to target fly-tipping in the Baldoyle area of north Dublin.

Checkpoints were established at random locations and times across the area with officers from Fingal County Council’s Environment Enforcement Unit being assisted by gardaí from Howth Garda Station, the divisional crime task force, the Traffic Corps and the Armed Response Unit. The council said these checkpoints will continue over the coming weeks.

“The aim of these checkpoints was to identify unauthorised and bogus refuse collectors committing offences as well as members of the public who are availing of the illegal service being offered. Both the unauthorised collectors and their clients can be subject to prosecution with fines and possible imprisonment under the Waste Management Act 1996 and the Litter Pollution Act 1997,” Fingal County Council said today.

As a result of the Baldoyle operation, the council made several seizures and is now seeking to identify the owners of this rubbish in order to prosecute them.

“Illegal dumping across Fingal is a serious issue and we are adopting a hard-line attitude in relation to prosecuting unauthorised collectors as well as those who are employing them to dump their rubbish. The checkpoints in Baldoyle were extremely successful and we are grateful to An Garda Síochana for their support in mounting this operation,” a spokesperson commented.

The council has appealed to the public to report incidents of fly-tipping to the gardaí or to the council on its hotline number 1800 20 10 93.

Read: ‘A blight on the countryside’: Minister pledges money to clean up thousands of tyres dumped around Ireland>

Read: ‘There’s a lack of civic respect’ – Call for an end to illegal dumping>