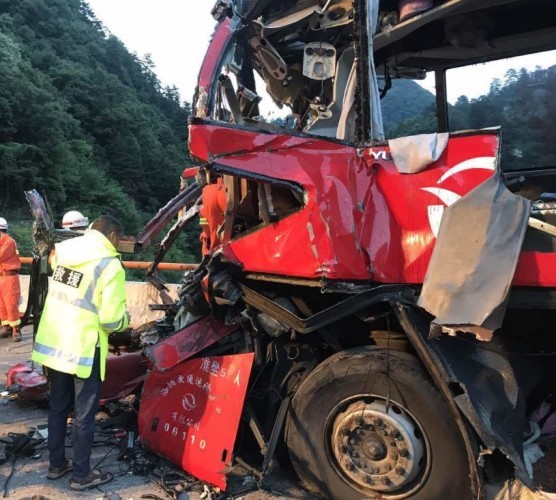 Rescuers work at the accident site

AT LEAST 36 people have been killed and 13 injured after a packed bus crashed into a wall at the mouth of an expressway tunnel in northern China, authorities have said.

The coach crashed at the Qinling Tunnel in Ankang, a city in Shaanxi province, last night, according to the State Administration of Work Safety.

Photos published by the official Xinhua news agency show the front of the red bus pushed in by the force of the crash. It was unclear if the crash occurred inside or just outside the tunnel.

The photos show a tow truck at the scene along with rescue workers surveying the damage on the road just outside the tunnel near forested hills. Twisted metal was strewn in front of the bus, several windows were broken and a front tyre was blown out.

“The coach was seriously mangled,” the State Administration of Work Safety said in a statement, adding that the cause of the accident was under investigation.

The bus had departed from Chengdu in southwest Sichuan province en route to the central city of Luoyang.

The injured have been rushed to hospital. The bus had a 51-passenger capacity and was carrying 49 people, the statement said. Local media said two children were on board.

Sichuan province is already reeling from another tragedy as 20 people were killed and hundreds more injured in an earthquake that struck the region on Tuesday night.

Deadly road accidents are common in China, where traffic regulations are often flouted or go unenforced by police.

The country’s frequently overcrowded long-distance buses are particularly prone to fatalities. There were more than 180,000 traffic accidents and 58,000 deaths in 2015, authorities said in December.

Traffic law violations caused almost 90% of the road accidents where people died or were injured in 2015, with the total number of such infractions reaching an astonishing 442 million.

Last month, 11 people died and nine were injured when a bus carrying 19 people collided with a lorry on a national motorway in northern Hebei province.

Another 10 people were killed and 38 injured in March when a bus collided with a cement truck in the southwestern province of Yunnan. At least 18 people were killed when a minibus plunged into a lake in the central city of Wuhan in December.

Last November, a pile-up on an expressway in the northern province of Shanxi killed 17 people and damaged 56 vehicles. In July last year, a coach crashed through a motorway guard rail and plunged into a canal near the northern city of Tianjin, killing 26 people.