TROPICAL STORM HARVEY lashed central Texas with torrential rains on today, unleashing “catastrophic” floods after the megastorm – the most powerful to hit the United States since 2005 – left a deadly trail of devastation along the Gulf Coast.

The storm has caused at least two deaths since making landfall late Friday as a Category Four hurricane, pummeling the town of Rockport outside Corpus Christi with sustained winds of 215 kilometers per hour, the National Hurricane Center (NHC) said.

One person was killed when their house caught fire in the Rockport area, local officials said.

And in Houston, a woman drowned when she left her car which had stalled in high water, local media reported citing police.

“Cannot emphasise enough how much flooding there is on roadways you are endangering yourself and our first responders by being out,” Houston Police Chief Art Acevedo wrote on Twitter.

Harvey slowly weakened as it advanced, ripping off roofs, flipping mobile homes, and leaving hundreds of thousands of people in the dark on the Gulf Coast, home to some of the country’s most important oil refineries.

The National Weather Service issued more than a dozen tornado warnings overnight for southeast Texas, including several in the Houston area.

Forecasts show Harvey hovering over the shore for the next days, dumping dangerous amounts of rain.

In Houston, a city of 2.3 million, the city streets turned into fast-moving rivers with officials warning residents to stay home. 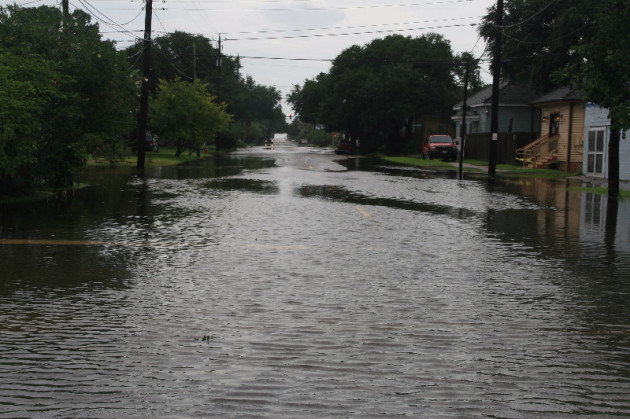 A flooded area of Houston yesterday

Hobby International, one of the city’s two airports, announced that all flights were canceled “due to standing water on runways,” while George Bush International was operating at limited capacity.

“Catastrophic and life-threatening flash flood ongoing.” the NWS said on Twitter. “This is an EXTREMELY DANGEROUS situation. Do not travel unless told to.”

Houston officials said that their 911 phone system was overwhelmed with emergency calls, mostly from stranded motorists. 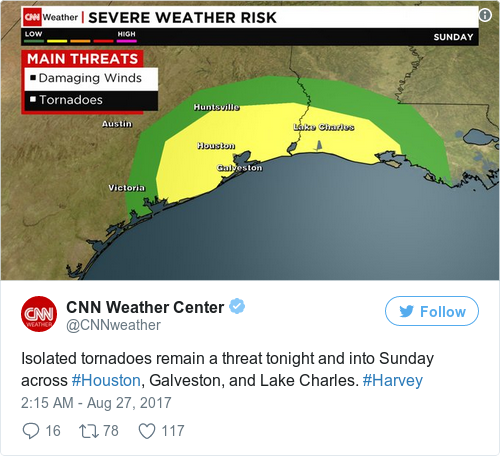 Texas Governor Greg Abbott said at least 50cm of rain had fallen in some areas — with another 50 cm or more a possibility.

As of late Saturday, about 230,000 customers were still without power, providers said. Roads were difficult to navigate due to debris and downed power lines.

“Rainfall of this magnitude will cause catastrophic and life-threatening flooding,” the NHC warned.

The Federal Emergency Management Agency said there should be no illusions about the long-term impact.

“This is going to be an unprecedented long and frustrating event for the state of Texas,” FEMA director Brock Long told MSNBC.

“The recovery from this disaster is going to be years.”

Emergency services were struggling to make headway as rains continued to pour down, although the Coast Guard managed to airlift 20 people and a dog to safety.

One person was confirmed to have died, with officials in Aransas county saying the victim had perished in a fire that broke out in his house.

President Donald Trump, aware of the damage to George W. Bush presidency’s for his tardy response to Hurricane Katrina, said he was closely monitoring relief efforts from Camp David in Maryland.

The storm represents the first major domestic challenge for Trump, and he plans to head to Texas next week.

In Rockport, a local school and airport were among the places to suffer major damage while homes were also burnt to the ground as power cables caught fire. There were similar scenes in nearby Corpus Christi.

Brian McNoldy, a hurricane expert at the University of Miami, said a strong ridge of high pressure was preventing the storm from dispersing.

“There’s no sign of it really moving in a foreseeable future,” he told AFP.

Coastal Texas is a fast-growing area, with some 1.5 million people moving into the region since 1999.

Harvey is the most powerful hurricane to hit the mainland since Wilma struck Florida 12 years ago.

In the Texas town of Victoria, Mayor Paul Polasek told CNN the storm was “not as bad as it could have been,” but he nevertheless put in place a dusk-to-dawn curfew.

Read: ‘Catastrophic, life-threatening’: Hurricane Harvey is battering Texas but is beginning to slow down >

Read: Evacuations underway as Texas braces for ‘fiercest hurricane to hit US in nearly 12 years’ >