THINK OF ROMANTIC settings in Italy and the mind tends to wander to Rome, Venice or Verona – certainly not to Treviso.

If you are picturing man going down on one knee, it’s usually some nervy geek on the Spanish Steps. Here it was a succession of Connacht props on the half-way line.

One by one they dropped, Denis Buckley most crucially with an injury, then Paddy McAllister, Finlay Bealham and Dominic Robertson-McCoy on the back of sustained Italian power at scrum time. The upshot was Benetton dominated this area en route to a 20-12 victory, their fourth win on the spin in this competition, one that effectively ends Connacht’s season.

As for Benetton’s, well it is only just beginning. Never before has an Italian side reached a major final in professional rugby. Now these Treviso chaps are one win away from doing so.

Bearing in mind where they came from – a bottom place finish in this year’s regular Pro14 season – that’s some turnaround. And no one can argue that they didn’t deserve this win, their first over Connacht in five years, a victory for smart game-management, a vastly superior scrum, an organised defence and an unbreakable spirit.

For Connacht, Abraham Papali’i’s red card for landing a shoulder on Niccolò Cannone’s head six minutes from the end pretty much summed up their night. They lost Buckley to injury after only 36 seconds; they lost the vast majority of their scrums thereafter.

Worse than that, their kicking game was poor, their maul defence pressurised yet again. It was only their defence and attacking maul that kept them in the game. Lion in waiting Bundee Aki didn’t make much of an impact whereas the Benetton centre, Ignacio Brex, most certainly did, getting their only try. Paolo Garbisi, their out-half, did the rest of the damage, kicking five penalties.

Should they go on to reach the final, it’ll be like the Titanic cutting through the middle of the iceberg and making sure to cut a few ice cubes for the captain’s gin and tonic. It will be like the mouse beating the cat; the Christians eating the Lions.

That’s for another day. Today wasn’t a case of David versus Goliath; it was David versus David – for Connacht also came into this game dreaming of a miracle. Wins over Ulster and Munster had boosted their points tally as well as their morale and by the time Buckley won a turnover with the first play of the game, you just wondered if something special was going to happen.

Instead something terrible was – well, for Buckley, anyway. The prop, making his 200th appearance for the club, had to go off injured, leaving McAllister to start his shift much earlier than expected. 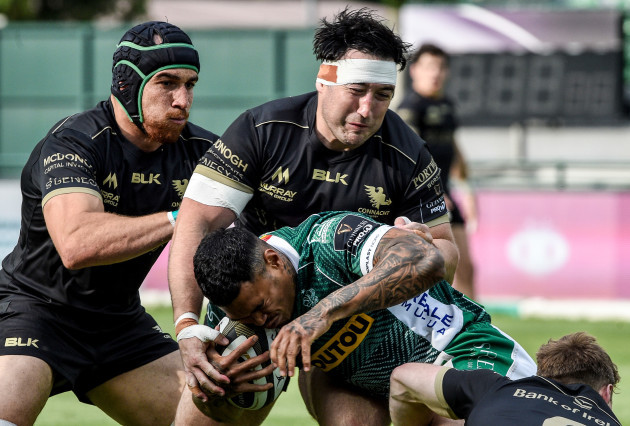 He’d have a rough time of it, coughing up two scrum penalties in the first half, the second of which eventually leading to a kickable penalty for Garbisi.

It was a recurring theme in that opening half, Connacht gifting Treviso their opportunities. If it wasn’t Conor Fitzgerald failing to gather Garbisi’s restart, then it was Aki lazily catching Monty Ioane long after the winger’s clearance kick had landed downtown. Add in McAllister’s issue at scrum time and you have 11 Benetton points.

To be fair, they played a part in getting those as well; Garbisi still had to land his kicks; Brex had to angle his sixth minute run cleverly to find a gap in the Connacht defence before speeding past Alex Wootton to get their opening try.

At the other end, Connacht were once again proving that their attacking maul is considerably better than their defensive one, and after just 90 seconds, they showed us precisely how when they marched Benetton back towards their line, winning a penalty.

From that opportunity, they scored, Shane Delahunt touching down but only after the Connacht pack showed superb technique to pick up low crouching positions – Aki adding a critical shove – before Delahunt dived across. Tom Daly converted. It looked like Connacht were on their way.

Instead things turned messy. All Treviso’s first half points were avoidable; Fitzgerald with that missed catch from Garbisi’s restart, McAllister with his scrum issues, John Porch getting isolated at the breakdown after Garbisi’s first penalty of the day struck two uprights; Aki’s shoulder on Ioane. It shouldn’t have been 11-7 to the hosts at half-time; Connacht should have led.

Indeed, they had their moments; Cian Prendergast setting in motion one coast-to-coast move that saw the flanker make an electrifying burst from his five-metre line, Paul Boyle, Kieran Marmion and Peter Sullivan playing supporting roles in the production. It came to nothing in the end, though – as did a tap-and-go from five metres out in first-half injury-time, Benetton celebrating that turnover with the kind of cheer you’d expect from a lotto winner after seeing their numbers come up.

In this context, you just sensed the next score would be vital and when Connacht got it on 43 minutes – Boyle with the touchdown after he had collected Delahunt’s line-out – the game was theirs to take control of.

But they never did. From the next attack, Benetton drove into the Connacht 22, won a penalty when Aki was pinged for going off his feet. Garbisi kicked it and Benetton were back in front, 14-12; 47 minutes on the clock.

It’d get worse for Connacht when McAllister went off injured on the hour-mark; Bealham coming on at loosehead, conceding a penalty and receiving a yellow card for his troubles at his first scrum in this unfamiliar position. Garbisi kicked the penalty, 17-12 to Benetton, just under a quarter of the game remaining.

Unforced errors became a theme; Sam Arnold kicked out on the full, Aki knocked on, so did Porch; Bealham coughed up another scrum penalty upon his return; then there was the red card for Abraham which preceded Garbisi kicking his fifth penalty.

The ever-defiant Ultan Dillane and Paul Boyle never gave up the fight but it wasn’t heart that Connacht lacked – just Buckley – as well as a bit of composure. Their season is as good as over. As for Treviso’s, it’s about to get exciting.