AN IRISHMAN LIVING in Japan has spoken about his shock at North Korea’s ballistic missile test, which saw a missile land in the Sea of Japan yesterday.

“You get an alert from the government that says in English ‘emergency alert’ and then everything else is in Japanese.

“We get an emergency alert at two minutes past six and I just saw, trying my best to translate from Japanese, it looks like North Korea has launched a missile towards us.” 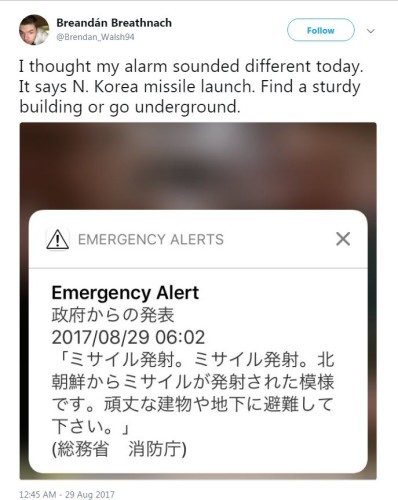 Walsh, from Maynooth in Co Kildare, said he initially thought the government was being over-cautious.

“I just assumed we were just a bit too close for comfort because we’re all aware that they often launch, the North Koreans launch missiles and they end up in the Sea of Japan quite regularly and we’re never too concerned about it. It’s a bit strange when it happens but we’re never concerned, so I assumed it was something like this.

So about two minutes later the next door neighbour calls in and says, ‘Brendan, we have to get out of here … That alert, it says that the North Koreans have launched a missile towards us’.

Walsh said he and his neighbour went to a nearby subway station because it’s underground. 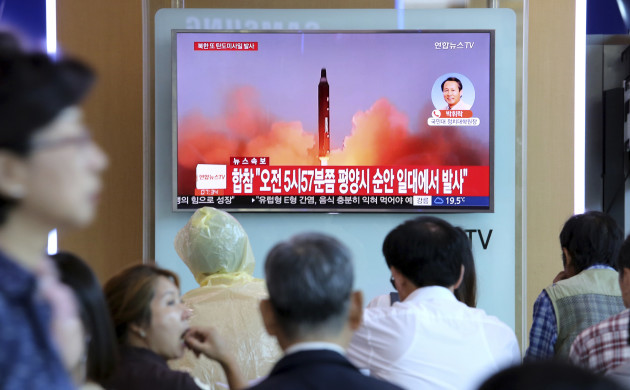 He said his immediate concern was for his girlfriend, who’s in hospital.

“For me, my first concern was I need to get to my girlfriend because she’s a little bit ill at the moment…

“All I’m thinking is, she’s in hospital, she’s on the fourth floor, she’s got a drip in her arm, she’s quite weak, she can barely sit up straight at the moment, so are they just going to leave here there and run for it themselves?

Walsh said he didn’t know why North Korea would “go near” Hokkaido, an island only slightly smaller than Ireland.

He condemned North Korea for “raising tensions and presenting a real threat to peace and security in the entire North East Asia region and beyond”.

It is an unacceptable and provocative violation of the DPRK’s international obligations not to conduct such tests and I unreservedly condemn such actions.

The actions of North Korea, officially the Democratic People’s Republic of Korea (DPRK), have been denounced by leaders in the region and around the world, with Japan’s prime minister, Shinzo Abe, calling the test a “an unprecedented, serious and grave threat”. 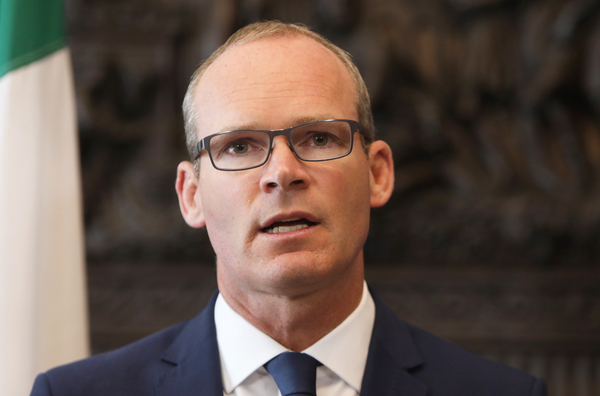 US President Donald Trump was famously vocal about North Korea’s actions in the run up to this latest test, controversially threatening to rain down “fire and fury” on North Korea if it endangered his country.

He said today that “all options are on the table” after the latest test.

The EU has also denounced the launch, calling it a “serious threat” to the region.

A spokeswoman for British Prime Minister Theresa May said that she was “outraged” by the launch.

Coveney called for North Korea to abandon its programmes to develop such ballistic missiles, as well as nuclear weapons and weapons of mass destruction.

In addition to the grave threat to lasting peace in the region, DPRK’s nuclear weapons and ballistic missile programmes absorb scarce resources, a detrimental impact on the lives of the North Korean people.

Drought in North Korea is currently threatening a famine in the country that experienced a devastating famine in the mid-1990s that estimates say killed as many as one million people.

The UN security council passed a new round of sanctions against the country earlier this month, imposing a ban on exports that seek to deprive it of $1 billion (about €850 million) in annual revenue.

“We reaffirm Ireland’s support for the international sanctions regime against North Korea, and urge the authorities in Pyongyang to re-engage with the Six Party Talks, immediately and without pre-conditions,” Coveney said.