Warning: The following post contains an image of an injured animal in distress

A CRITICALLY-INJURED animal was left unaided for 10 hours before being put down at a cattle mart in the west of Ireland.

The bullock (a castrated bull raised for its beef) in question sustained one broken hind-leg and seriously injured another at the Mayo-Sligo mart in Ballina, Co Mayo, according to Kevin Forde of industry site That’sFarming.com.

The animal was left to fend for itself after sustaining the injuries from roughly 10am on the morning of Tuesday, 15 August, until 9pm that evening when it was eventually euthanised.

The Ballina mart said that it would be providing no further comment on the story.

Previously, Billy Loftus, the head of the mart, told That’sFarming that “the vet was called out immediately that morning and he gave him a shot of something for the pain”.

“He said he would come back later that evening as there were too many people around.”

It’s understood that the animal injured itself while attempting to jump a gate at the mart. The bullock was subsequently moved to a pen on its own for the remainder of the day. 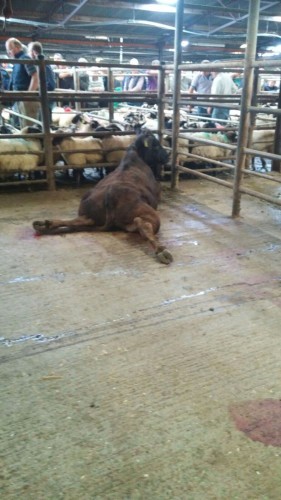 The injured bullock, pictured in a pen on its own at the Mayo-Sligo mart on 15 August

In response to a request for comment, a spokesperson for the Department of Agriculture confirmed that the “incident is currently being investigated”.

When asked why the animal hadn’t been humanely dealt with that morning, Loftus meanwhile said “we couldn’t do anymore with all the people around”.

“We have health and safety to worry about as well. It’s not in our interests to have an animal suffering.

We have a standard procedure where we usually house injured animals in a bedded shed but we couldn’t move him with all the people around.

The standard code of practice for dealing with such an incident is for the injured animal to be put down immediately to prevent further suffering.

“It would be down to the mart, or at least the local mart here anyway would be insured, and responsible,” a local vet told That’sFarming, adding that “animal welfare regulations are always in favour of the animal”.

If an animal has come in and is given a number, it seems to be the responsibility of the mart to have it slaughtered on the premises.

Non-statutory body the Farm Animal Welfare Advisory Council (FAWAC) said that it is “aware of the situation” when asked for comment, and added that the matter is “being dealt with in the appropriate manner”.

Industry body the Irish Farmers Association (IFA) declined to comment on the incident and referred a query to the Department of Agriculture.

Previously, IFA president Joe Healy told That’sFarming that he had always found the Ballina mart to be “very professional”.

Of the bullock itself, Healy said: “Look it was under supervision.”

“It’s in any farmer’s or mart’s interest to treat animals in the best possible manner, and the mart managers I know, that’s what they do,” he said.