A GALWAY COUNCILLOR says he wants to see a memorial on Tuam Town Hall to an Irish confederate removed.

Independent Councillor Shaun Cunniffe told local newspaper the Connacht Tribune that he wants to see the memorial to Major Dick Dowling taken off the building.

Speaking to TheJournal.ie, he said his attention had been brought to the memorial given the recent racist rallies in Charlottesville.

“Having thought about it I think it’s fair to say that even though he was a great businessman and civic leader, [he was] a successful Confederate in the army. The whole point of the Confederate war was to support slavery in the South.” 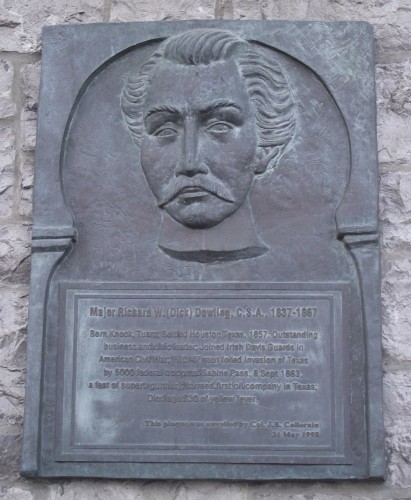 He pointed out that the bronze memorial is in the military name of Major Dick Dowling.

“And we’re commemorating his prowess as a military person and so I think it isn’t really appropriate that we leave that on our town hall. Now but that said, I would just like it removed somewhere more appropriate. He was a significant figure from Tuam and it is in Houston where there were streets named after him.”

Journey to the USA

Dowling was born in the townland of Knockballyvishteal in Milltown near Tuam in Co Galway in 1837, to a tenant farming couple. After they were evicted from their home in 1845, he moved to New Orleans with his older sister.  His parents followed them a few years later, but succumbed to yellow fever.

He moved to Houston from New Orleans, and went on to open a number of saloons. He was also involved with an Irish militia company, which became part of the Confederate Army, and Dowling was elected First Lieutenant. He was stationed at the Sabine Pass where he foiled an attempted invasion by federal troops.

Dowling was commended for his actions during the battle, and after the war he returned to Houston to grow his businesses. He died aged 30 due to yellow fever and is buried in Houston.

A statue was commissioned of Dowling in 1905 and is currently situated in Hermann Park. The city’s Dowling Street was also named after him, but a petition to rename it to Emancipation Avenue was successful.

Cunniffe said that Dowling’s role in the American Civil War “needs to be commemorated and perhaps discussed as an item – it is an historic fact that he fought in the war”. 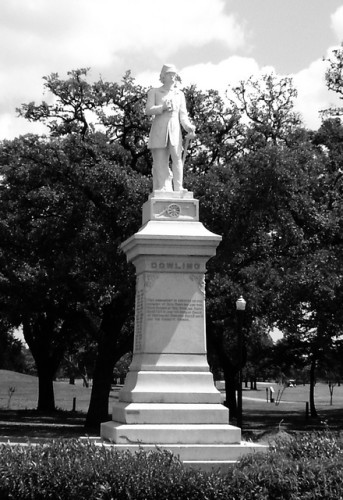 A statute of Dick Dowling in Hermann Park, Houston, Texas.

“Because the strange thing was his story, they were evicted in 1845 in the Famine and the whole family went to America, and he would have suffered huge injustice and disenfranchisement. And you just think god, [why] when he himself is a great business person he would wish to uphold slavery.”

He said Dowling’s role shouldn’t be sanitised, but should be discussed and analysed.

Control of the plaque comes under the Municipal Authority of Tuam, which is due to meet on 11 September. Cunniffe said that at this meeting he will ask to have the issue added to the agenda.

“It will be interesting to hear all views and historical input” on the issue, he said. 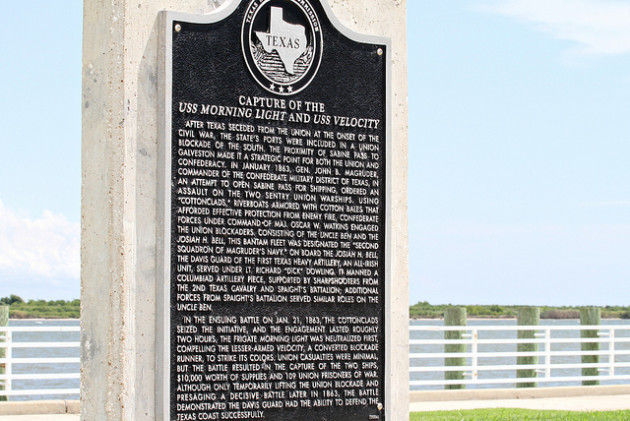 A memorial to the Battle of Sabine Pass.

The plaque was put in place on the town hall in Tuam in 1998 and Cunniffe said that to his recollection, there was no discussion regarding whether it would be appropriate or not.

“It celebrated that a person from our area did so well in business and was a civic leader and unfortunately really we didn’t consciously clearly [think] that the civil war was about one of the most fundamental rights of freedom. It didn’t seem for one reason or another to be discussed.”

He said that the town could also contact the authorities in Houston and explain what they intend on doing with the plaque.

“It is important that it is remembered from there, but but I would like to see it put somewhere where it can be viewed in context and maybe used as a discursive piece,” concluded Cunniffe of the plaque.

Read: IRA leader Seán Russell and the story of Dublin’s most controversial statue>
Read: Charlottesville mayor: Killing of woman was ‘terrorist attack with a car used as a weapon’>