YESTERDAY, A LONG-awaited report from the Mother and Baby Homes Commission of Investigation was released.

The report recommended that a State apology, redress and access should be given to survivors of the mother and baby homes operated in Ireland between 1922 and 1998.

The lengthy document confirmed that about 9,000 children died in the 18 homes under investigation – about 15% of all the children who were in the institutions.

Here’s a look at how this story was covered in headlines around the world.

12.01.21
How a God-fearing Ireland shamed, abandoned and punished its 'fallen' women and girls 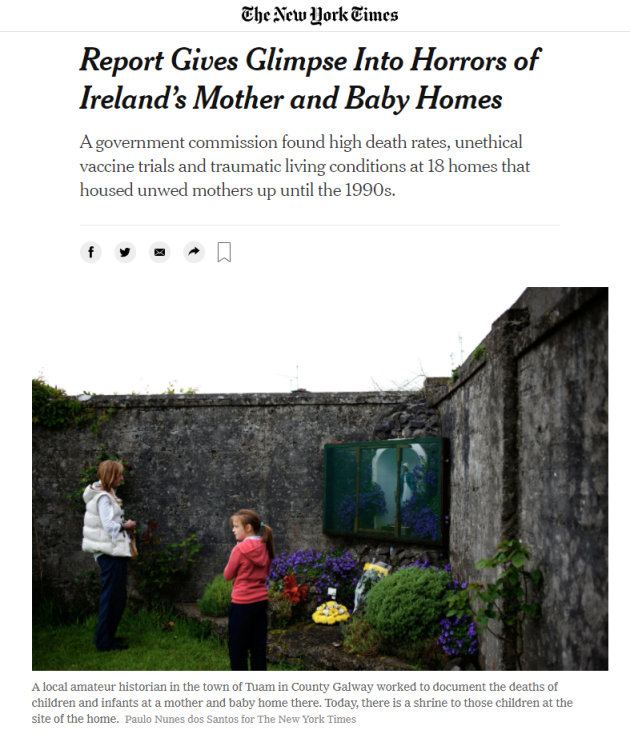 The New York Times said the report “found a shocking number of deaths and widespread abuses” at the homes.

“For decades, the stories of these places and the atrocities carried out in them, were largely unspoken — despite calls from the mothers who became virtual prisoners within their walls and children who spent their earliest years there, later sharing stories of neglect and abuse.

But as the country has made strides to reckon with uglier aspects of its conservative Roman Catholic roots, deeply intertwined with the foundation of the state, there have been recent moments when the scale of the systemic abuses has been thrust into the light.

Tuesday was one of those days.

The Guardian said the country “ripped back the veil on a dark historical chapter condemned tens of thousands of unmarried mothers and their babies to callousness and cruelty in institutions”.

“The five-year investigation into the homes – religious institutions for unmarried mothers and their children that doubled as orphanages and adoption agencies – chronicles deprivation, misogyny, stigma and in some cases shocking levels of infant mortality, adding up to a blistering indictment not just of the institutions but the wider culture of oppression that sustained them.”

The BBC covered the news of the report in several pieces – outlining the key points and reaction here, a timeline of the Tuam mother and baby home deaths here and speaking to a woman who found out she had two older brothers who were born at the Tuam home here.

“Anna Corrigan was in her mid-50s when she made a shock discovery about her family.

The Dubliner was raised as an only child, but in 2012 she found out she had two older brothers her mother had never told her about.

“She also discovered both boys were born while her mother was a resident of the Tuam mother and baby home in County Galway.

“Anna has spent the past eight years trying to confirm their fate.”

‘Intertwined with the teachings of the Catholic Church’

“Irish society in the mid-20th century was deeply intertwined with the teachings of the Catholic Church, and pregnancies out of wedlock were seen as scandalous.

There were about 56,000 unmarried mothers and about 57,000 children in the mother and baby homes investigated by the commission.

ABC News, using copy from the Associated Press, said the report “recounted decades of harm done by church-run homes for unmarried women and their babies”.

“The inquiry is part of a process of reckoning in overwhelmingly Roman Catholic Ireland with a history of abuses in church-run institutions, including the shunning and shaming of unwed mothers, many of whom were pressured into giving up babies for adoption.”

NBC News said the report “described the emotional and even physical abuse some women were subjected to” in the homes.

“Ahead of publication, details of Tuesday’s report were leaked to the media, prompting outrage from the victims — including mother-and-baby home survivor Philomena Lee, whose story was portrayed in a 2013 movie, starring Dame Judi Dench.

Ireland has traditionally been a Catholic stronghold, but decades of abuse scandals have damaged the church’s reputation and weakened its influence.

Politico said the report found the mothers and children in the homes “suffered cruel and often lethal neglect”.

“Over the course of the past two decades, state-ordered probes have documented abuse of women and children in mostly Catholic Church-run institutions. These included residential schools, workhouses, orphanages and so-called Magdalene laundries, where unwed mothers who had given up or lost their children spent their days in prayer and unpaid menial tasks.”

The Telegraph said that Ireland “confronted one of the darkest chapters of its past” with the publication of the report.

The inquiry is the latest in a series of official probes that have tarnished the standing of the Catholic Church in Ireland, once seen as all-powerful.

“Other scandals have included paedophile priests, abuse at workhouses, and forced adoptions of babies, prompting Pope Francis to begged forgiveness during his visit to Ireland in 2018.”