THE CENTRAL STATISTICS Office (CSO) has published its latest set of results from Census 2016, with these figures focused on the theme of homelessness.

On the night of the Census in April 2016, it recorded 6,906 people as being homeless in Ireland. A majority (58%) were male, and 73% of homeless people were found in the Dublin region. 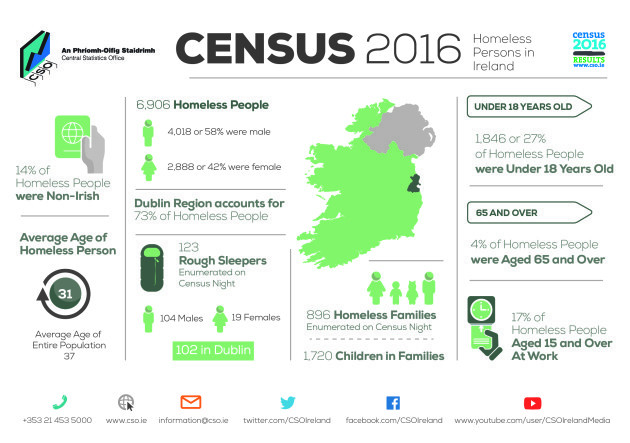 Of the 5,212 homeless persons aged 15 and over, 899 of them were employed. There were a further 607 people who were unable to work due to permanent sickness or disability. This represented 12% of the total number of homeless people, compared to 4.2% of the general population.

In all, 27% of homeless people said that they had a disability, compared with 13.5% of the general population.

On Census night, 123 people were sleeping rough and 102 of them were in Dublin.

According to the figures released last week, there were 1,365 families with 2,895 children staying in emergency accommodation in June. This marks a rise of 118 children from the numbers from May.

Speaking to TheJournal.ie after the release of these figures, Sinn Féin TD Eoin Ó Broin said: ”Clearly, not only has the government not been able to get families out of hotels by the deadline of the end of June, but they’re not able to get to grips with the ever increasing number of families presenting as homeless.”

In July, Minister for Housing Eoghan Murphy confirmed that a deadline set by his predecessor Simon Coveney to have all families out of commercial hotels by July would not be met.

With reporting from Hayley Halpin

Read: The CSO has published an interactive map of where you will find the most single people

Read: This is the oldest town in Ireland (in terms of average age)