TRIBUTES ARE BEING paid to Andy Needham, an Irish communications official with the United Nations High Commissioner for Refugees (UNHCR), who died unexpectedly in hospital in Kenya on Friday.

Andy died suddenly and unexpectedly at the Aga Khan University Hospital in Nairobi after undergoing a routine operation.

“His untimely death deprives the UNHCR of a powerful advocate for the rights of refugees,” the national Union of Journalists said in a statement.

The 44-year-old previously worked with Bill O’Herlihy Communications, the FAI and as editor of the Garda Review before joining the UNHCR.

The father of Nobel laureate Malala Yousafzai, Ziauddin Yousafzai, paid tribute to Andy on Twitter, describing him as a “long-time friend”. 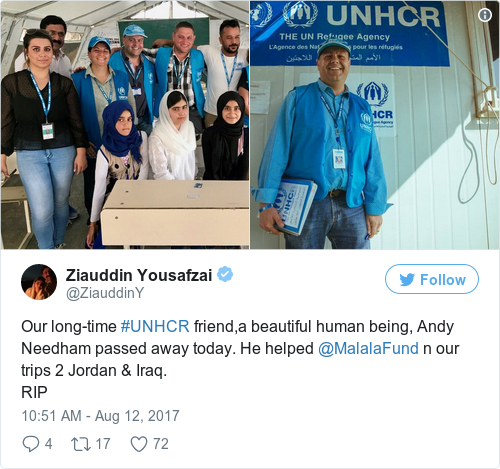 Andy’s former colleagues in the Garda Review and the UNHCR also paid tribute to him on Facebook.

UNHCR Iraq said: “Andy was passionate about refugees and displaced persons and was incredibly dedicated to his work.

His sense of humour, team spirit and love of life rendered him a cherished friend and co-worker. His smile will live on with us. He will be truly missed.

Andy began his work with the UNHCR as an External Relations Officer at the world’s largest refugee camp, Dadaab, in Kenya in 2008.

In 2010 he joined the Somalia operation and he worked in the country during the 2011 famine, describing the situation as “one of the most complex and challenging” missions imaginable.

“His energy and determination combined with his passionate commitment to social justice made him a persuasive champion for the rights of refugees, ” Seamus Dooley of the NUJ said.

“Andy was a much-loved colleague, noted for his enthusiasm and generosity of spirit.”

“His passing comes as a shock to his family… and to his many friends and colleagues, to whom sympathy is extended at this sad time.”