CHINA IS TESTING possibilities for astronauts to stay on the moon for longer periods of time, through a trial scenario of a Moon station.

Four postgraduate students have moved into a cabin to replicate life in a lunar-like environment.

The students, from Beijing’s astronautics research university Beihang, will live in the cabin, called the Yuegong-1, or Lunar Palace in English, for up to 200 days.

They will live in the sealed lab to simulate a long-term, self-contained space mission with no input from the outside world.

China does not expect to land its first astronauts on the moon for at least another decade, but the project seeks to help the country prepare lunar explorers for longer stays on the surface.

“As the longest one of its kind in the world, it will help develop the technologies necessary for the guarantee of astronauts’ security and life quality in medium and long-term deep space explorations,” a statement from the university said.

Two men and two women entered the lab on Wednesday for an initial stay of 60 days. They will then be relieved by another group of four, who will stay 200 days, before returning for an additional 105. 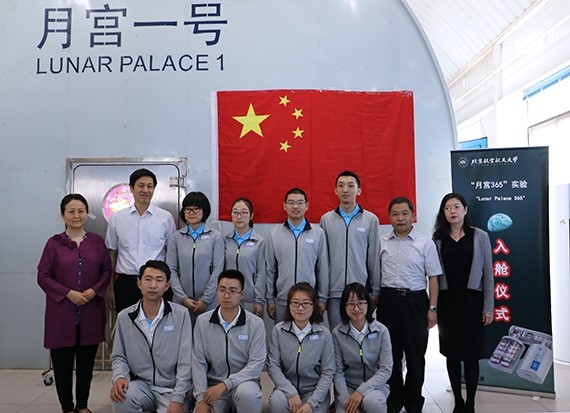 The Lunar Palace has two plant cultivation modules and a living cabin: 42 square metres containing four bed cubicles, a common room, a bathroom, a waste-treatment room and a room for raising animals.

In the cabin, human waste will be treated with a bio-fermentation process, and experimental crops and vegetables grown with the help of food and waste byproducts.

“I will be in charge of the treatment of solid waste, urine, shredding straw, threshing wheat, processing food and other work,” one of the student volunteers told CCTV.

They added that other team members would have tasks related to crop growing, health monitoring, and supply inventory.

The Lunar Palace is the world’s third bioregenerative life-support base, and the first developed in China.

China is pouring billions into its military-run space programme and working to catch up with the United States and Europe, with hopes to have a crewed outpost by 2022.

China currently have over 180 satellites in space. 11 Chinese people have travelled to space and China sent its first crewed mission into space in 2003.

The country aims to land a rover on the far side of the moon, this would be a first for mankind, according to a report from the China National Space Administration (CNSA) in December 2016.

In 2020, China plans to land another rover on Mars. This has been tried by Russia but to date, the US is the only country to accomplish this.

It was reported in May that Ireland’s first satellite is set to be developed after a team of Irish based researchers got the go-ahead from the European Space Agency.

The Education Irish Research Satellite 1 will be launched from the International Space Station and orbit the Earth for a year – if strict tests and reviews are passed.

Students at University College Dublin and Queens University Belfast are building the spacecraft with the assistance of academics.

If launched, the spacecraft will be managed from a ground station at UCD. It aims to test experiment with thermal coatings for spacecraft and gather data on gamma ray bursts.

With reporting by Cliodhna Russell and AFP.