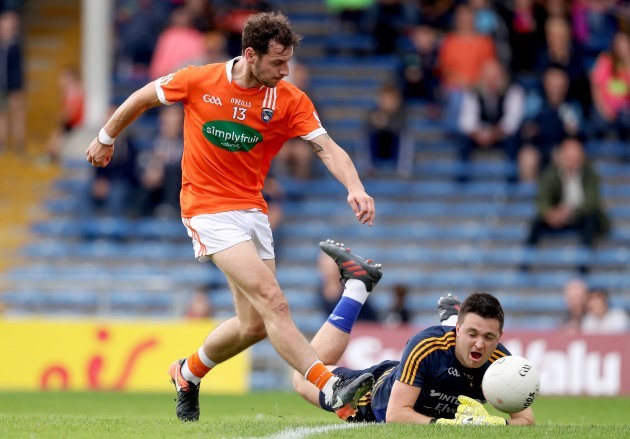 THREE MONTHS AFTER they were caught at the finish line by Tipperary in the battle for league promotion, Armagh exacted a form of revenge in the championship arena today.

Jamie Clarke’s composed finish to the net with a minute of normal time left on the clock was the crucial score as Kieran McGeeney’s side held on afterwards for a two-point success.

Trailing 0-10 to 0-8 at the interval, Armagh were further rocked after the interval when Michael Quinlivan finished wonderfully to the net for Tipperary.

But despite possessing a four-point advantage, 1-10 to 0-9, after that strike in the 39th minute, Tipperary did not have the energy to kick on with Armagh finishing the stronger, inspired by man-of-the-match Niall Grimley who finished with 0-8.

Tipperary forged a lead at half-time with Liam Casey, Josh Keane and Jack Kennedy all impressing in the scoring stakes. Armagh were unfortunate to have a Gavin McParland goal disallowed in the 19th minute with referee Paddy Neilan calling play back for a free rather than playing the advantage rule. 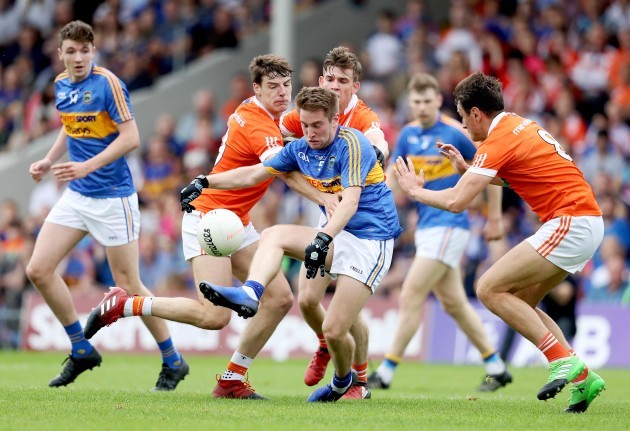 Quinlinvan, clearly hampered by injury, and Conor Sweeney were closely watched by the Armagh defence but Sweeney was still an excellent ball-winner in the Tipperary full-forward line.

Four minutes into the second-half Sweeney pounced to gather and transfer to Quinlivan, who fired an excellent shot to the net.

Tipperary got a further boost in the next passage of play when goalkeeper Ciaran Kenrick smartly blocked a goalbound effort by Andrew Murnin. 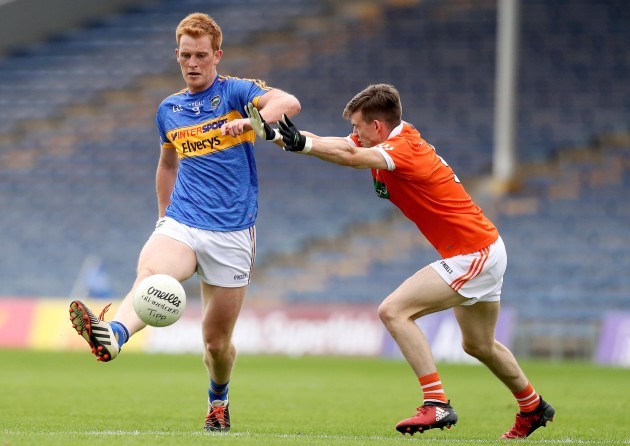 However Armagh pushed on and rattled off four points without reply to draw level by the 53rd minute at 1-10 to 0-13. It was all square again 11 minutes later when a Sweeney free for Tipperary left it 1-12 to 0-15 but all the momentum lay with Armagh.

Stefan Campbell launched over the point that nudged them ahead and then they exploited the gaps in the Tipperary defence when Clarke found the net.

Tipperary rallied as they faced a four-point deficit to outscore Armagh 0-3 to 0-1 in injury-time but could not force a goal against a packed defence as the away team booked their place in Round 4B.