AN EXTINCTION REBELLION activist has avoided trial over a graffiti attack at the Department of Foreign affairs.

Orla Murphy, 20, with an address at Ballinacarrig, Whitechurch, Co. Cork, was charged with criminal damage by spraying ‘It’s All For Show’ on the window of the Department of Agriculture, on Kildare Street, Dublin 2 on 4 December last.

She had pleaded not guilty and walked free from court today.

According to Extinction Rebellion the slogan was in a protest on the UN’s sustainable development goals.

Soon after the incident bail terms were set barring her from the Dublin 2 area, and all government buildings. However, the film student and climate activist broke the conditions in March and later spent 34 days in custody on remand before taking up bail again.

Extra bail terms were later added meaning she had to stay out of all of Dublin except for court appearances, and be contactable on a mobile phone at all times, and abide by Covid-19 regulations.

She had pleaded not guilty to the charge and appeared at Dublin District Court today to face a contested hearing. 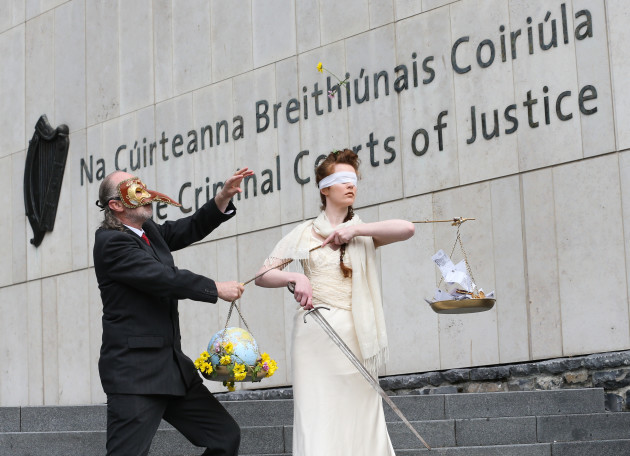 However, Judge John Hughes noted the prosecution was not in a position to proceed. The defence objected to an adjournment.

Judge Hughes noted that the case had been before the court on a number of dates already and it had been set down for hearing.

He dismissed the charge.

Extinction Rebellion Ireland members staged a protest outside the courthouse in support of Murphy.