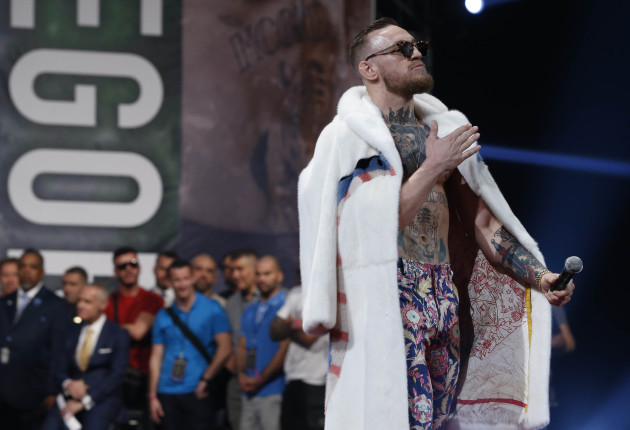 IRISH MMA FIGHTER Conor McGregor is facing fresh claims of racism after a press conference in New York last night where he claimed he was “half-black”.

McGregor was speaking on the third night of a promotional tour around North America ahead of a professional boxing match with undefeated American Floyd Mayweather.

On the first night of a tour in which both fighters have been throwing insults at each other, McGregor shouted at Mayweather to: “Dance for me, boy”.

The comments towards Mayweather and the historical connotations surrounding McGregor’s use of the word ‘boy’ were criticised by people online and were picked up by some US media outlets.

The Washington Post was among those who did so. It wrote:

Possibly sensing that he had crossed a line, McGregor quickly changed his comments to, “Dance for me, sir. Dance for me!” However, that did little to allay the negative reception online for his choice of words, especially as some thought McGregor said “son” and not “sir.”

McGregor has been accused of race-baiting ahead of other bouts in the past and in New York last night he addressed the fresh accusations of racism.

McGregor did not apologise and instead seemed to double-down on controversy by saying he was “half-black from the belly button down” and gyrating his hips for “black female fans”.

His full comments were:

Let’s address the race. A lot of the media seem to be saying I’m against black people. That’s absolutely fuckin’ ridiculous. Do they not know I’m half-black? I’m half-black from the belly button down. And just so that’s squashed. Here’s a little present for my beautiful, black female fans. 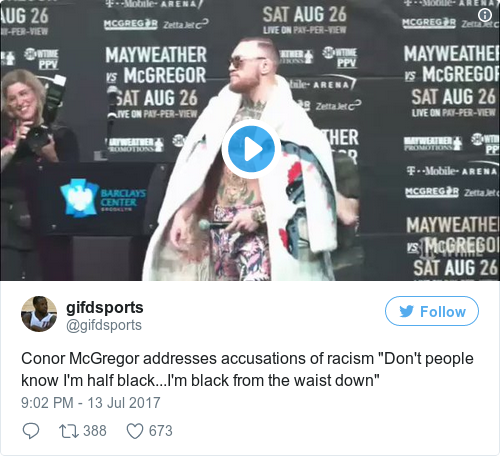 Addressing McGregor’s comments on racism and towards black women Mayweather, who has multiple criminal convictions for domestic violence towards women, said:

The ‘monkeys’ comment Mayweather was referring to occurred on Wednesday night when McGregor was interviewed by Guillermo from ABC’s Jimmy Kimmel Show.

Asked about the movie Rocky 3, McGregor struggled to remember the film but asked if it was the one with “the dancing monkeys in the gym”. 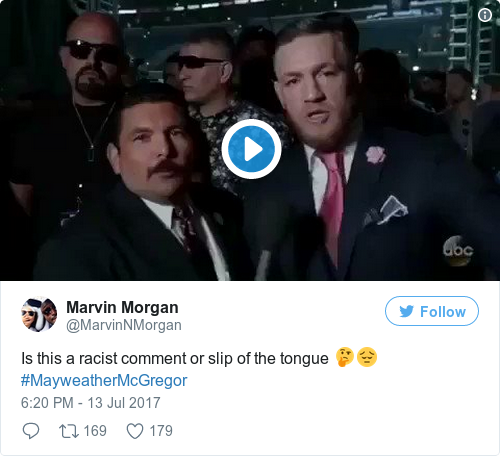 Is this a racist comment or slip of the tongue ?? #MayweatherMcGregor pic.twitter.com/xN4fAwj1yS

After last night’s comments about being ‘half-black’, McGregor was asked directly about the accusations of racism.

He said such allegations were “ridiculous” and that he was just having “a bit of fun”:

If anything I wanted to squash that tonight and have a bit of fun, that was a playful thing. I included the daughter, it’s all fun on my part. If he is in that mindset, well that’s his business. I don’t care. I know who I am, people who are watching know. If he’s upset and angry well then great.

“That’s ridiculous. That’s why I wanted to bring it up tonight in a playful way,” he added.

– With reporting by David Elkin on DailyEdge.ie