DUBLIN CITY COUNCIL is conducting a risk analysis of the capital to examine if physical barriers are needed to prevent terror attacks.

The council’s confirmation that meetings have taken place with An Garda Síochána comes after 14 people died in terrorist attacks in Spain which used a van and a car.

Vehicles have also been used in attacks on Nice, London and Stockholm.

Fears had been raised that Ireland’s major urban centres like Dublin’s pedestrianised Grafton Street could be targeted in an attack.

A spokesperson for Dublin City Council confirmed to TheJournal.ie that an assessment of the capital was underway to ascertain the need for barriers or bollards.

Meetings have taken place between Dublin City Council and An Garda Siochana on this issue and a risk analysis of areas in the city centre is being undertaken to determine where any additional measures may be needed and the type and nature of any required interventions.

However, Ciarán Cuffe – Green Party councillor and chair of the Transportation Strategic Policy Committee for DCC says that the physical barriers may be a “bottomless pit” of money.

I don’t think putting up bollards is the best solution for it. You cannot protect every pedestrian. If you started putting bollards up, where would you stop? It would be a bottomless pit. You’d have some put up on Grafton and Henry Street. Where would you go from there?

“I think that money is better spent on integrating people who move to Ireland.” 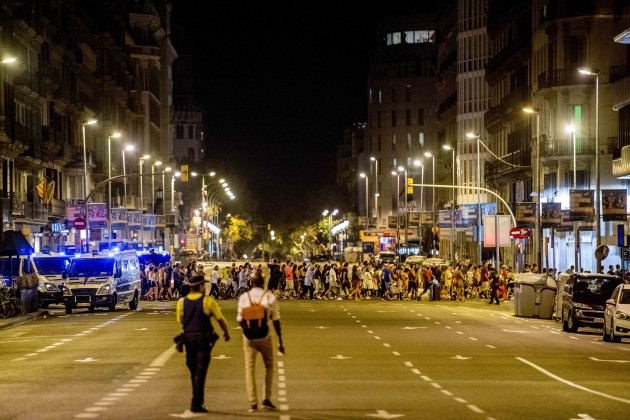 Police officers stand guard in a cordoned off area after a van ploughed into the crowd in Barcelona.

A spokesperson for the gardaí said that an attack was possible, but not likely.

An Garda Síochána is currently liaising closely with our security and law enforcement partners in Spain and at international level to share and assess any relevant intelligence and its potential impact on this jurisdiction.

“The threat level in this jurisdiction remains unchanged where an attack is possible but not likely. The level of threat remains under constant review by An Garda Síochána.

The public should be reassured that An Garda Síochána is committed to ensuring that the security of the state and our public areas remains a policing and security service priority.

“As a matter of course, we remind the public to remain vigilant and to immediately report any suspicious activity to An Garda Síochána.”

A Department of Justice spokesperson said that Ireland, like any other democratic country with similar values, is not immune to the threat from international terrorism.

They reiterated that the expert assessment is that while an attack on Ireland is possible it is unlikely and there is no specific information in relation to a threat to Ireland.

“The gardaí have in place appropriate operational measures in terms of intelligence, a well-trained and equipped special intervention capability and other national support resources.

While there is a small number of persons here whose activities in support of violent extremism give cause for concern, they are monitored closely by the authorities and any appropriate action is taken.

“The Garda authorities, supported by the Defence Forces and in conjunction with other emergency services and local authorities have also put in place detailed preparations in the event of an attack. Of its nature, much of this work cannot be disclosed publicly, but it goes on continuously.”