THE DATA PROTECTION Commissioner has called for more transparency from government in relation to the rollout of the Public Services Card.

Public concern has been growing in recent months over the Public Services Card (PSC), which is a plastic card needed by citizens to access an increasing number of state services.

Originally needed solely for social welfare recipients, the card is now becoming mandatory for a large number of services, prompting concerns that it is becoming an national identity card “by stealth”.

In her statement, Data Protection Commissioner Helen Dixon said that the government needed to be more forward with the public about the card.

“While a framework to authenticate identity for individuals availing of State services is an entirely legitimate government policy choice, transparency to the public on the underpinning legislative provisions, what data is being collected, for what purpose, and with whom data may be shared and for what purpose, needs to be adequately addressed,” the commissioner said.

Dixon said that the Data Protection Commissioner had raised concerns on multiple times in the past with government around the rollout of the card.

“The Data Protection Commissioner and her staff have strongly conveyed their views on numerous occasions to the Department of Social Protection and in a number of other fora, including at Oireachtas Committee hearings, that there is a pressing need for updated, clearer and more detailed information to be communicated to the public and services users regarding the mandatory use of the Public Services Card for accessing public services,” she said.

The provision of up-to-date, comprehensive and relevant information to the public is not just part of the openness and transparency requirements for the fair processing of personal data under data protection law, but also in the interests of maintaining public confidence in the system.

(You can read the full statement here)

Earlier, Social Protection Minister Regina Doherty defended the introduction of the card, stating that the legislation surrounding it hasn’t changed since 2013 and that “this isn’t a new process”.

The minister was speaking on RTÉ Radio One’s Morning Ireland as a number of concerns have been raised of people losing out on public services because they do not have a card.

Speaking this morning, Doherty said, “I know concerns have been raised in the last week, but there’s nothing new that has been added”, saying that the current social welfare legislation “is very precise and very detailed and has been in place since 2013″.

Despite Doherty saying that the public has been aware of the card’s introduction for years, a number of issues which arose as a result of the introduction of the card have been reported in the media in recent weeks.

A recent story in the Irish Times detailed how a pensioner in her 70s is owed about €13,000 because she refused to register for the card.

A parent whose son has Down Syndrome and was asked to get the card also recently told TheJournal.ie that she felt it was being enforced in other for them to obtain supports.

First mention of the PSC

The first mention of a PSC goes back to the Social Welfare Consolidation Act 2005, which was introduced by the Fianna Fáil-led government.

The introduction of the card was tossed about for a number of years before the card finally began to be distributed under the Fine Gael-Labour coalition.

Finally, the Social Welfare and Pensions (Miscellaneous Provisions) Act 2013 added provisions that are now cited by the Department of Social Protection as justification for the card.

“We’ve been having this conversation in the parliament since 2005, on a number of occasions, with a number of ministers,” Doherty said. 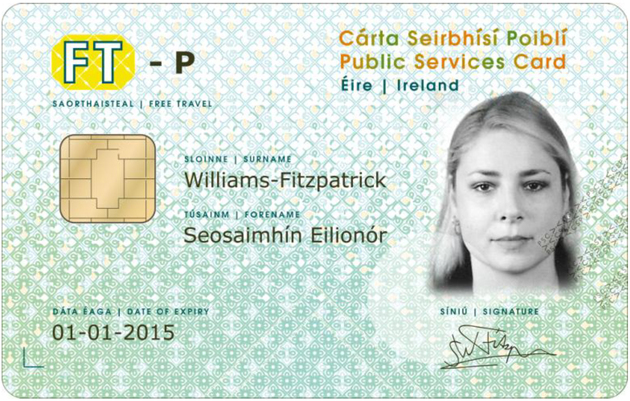 Defending the roll-out of the card, Doherty said that there is “nothing ambiguous about the legislation”.

“It is very clear that the legislation brings in, in the Social Welfare Act, a new standard authentication framework environment which is called Safe,” Doherty said.

“At the end of that authentication process, you will get a PSC. It’s a once-off process in which you will give us your data and we as a department can verify that you are who you say you are so that we can give you a once-off experience so that you don’t have to give that information to any other department,” she said.

Trying to encourage all users of public sector services to apply for a PSC, the Social Protection Minister said the personal information provided by a cardholder – date of birth, place of birth, gender, nationalities and surnames – will be shared with around 50 public services bodies, who are included in the 2013 legislation.

This is being done in order to “give an improved, enhanced and effective service”.

Addressing concerns around the security of information provided by cardholders, Doherty said:

“Just to reassure, we have probably one of the most robust systems and all of the standard requirements to ensure that the information is secure, as we have always done.

“We will also roll out the most current and up-to-date IT structures that we can in the Department of Social Welfare.”

Speaking today, Fianna Fáil’s spokesperson for transport, tourism and sport, Robert Troy, defended the cards but was critical of how they are being introduced.

It is “regrettable”, he said, that Doherty “is sort of threatening people – that you’re not going to get your entitlements unless you get the card”.

“What she really should be doing is outlining the benefits of having this card.”

Speaking on Newstalk Breakfast last week, Doherty denied that the card is compulsory.

“Let’s be very clear, nobody is required by law to have a card, so therefore it isn’t compulsory,” she said.

But for my department it’s mandatory, and I know some people might say I’m splitting hairs. But actually because of the high value of the public services that the Department of Social Protection gives, we give out over €20 billion every year.

“We believe that it’s not too much to ask people to authenticate who you are so that we can give you fast and efficient public service so that we get what you’re entitled to, and that’s all this safe process is.”

Read: Minister says Public Services Card is ‘not compulsory but is mandatory for services’

More: Hospitals, schools, jobs? Why the government’s ‘end goal’ is for every adult to have a Public Services Card