DISTRESSED OVER A rise in acid attacks, some 200 delivery drivers protested in front of the British parliament, demanding the government takes action.

“Most of the time we get attacked or our bikes are stolen. I don’t feel safe doing my work. Yesterday I felt threatened because some boys wanted to attack me,” Musa, a young UberEATS driver told AFP.

The protest was organised after five people, including delivery driver Jabed Hussain, were attacked with acid in the space of just 90 minutes on the night of 13 July.

“I’ve been working for Deliveroo for 4 years. I don’t feel safe to go on my bike. I don’t know what I’m going to do for a living,” said Hussain, who suffered slight burns to the chest.

The government needs to take proper actions. There needs to be more police in the streets. 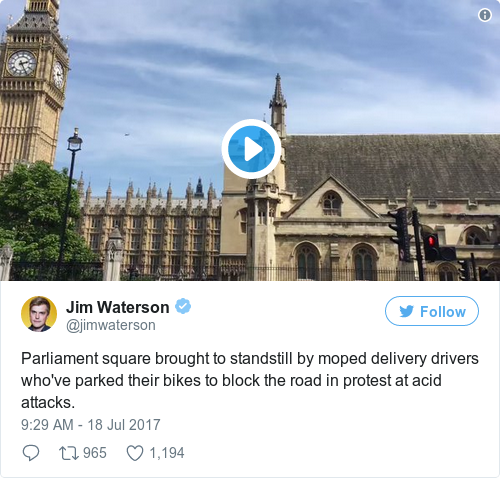 Parliament square brought to standstill by moped delivery drivers who've parked their bikes to block the road in protest at acid attacks. pic.twitter.com/bgAYwK4S7J

London has seen a sharp rise in acid attacks in recent years.

Some experts have suggested that criminal gangs may be switching from carrying knives to acid because it could lower the risk of prosecution.

Yesterday, MPs debated the best way to tackle the issue, with many backing tougher sentences and the introduction of a minimum age requirement to buy certain products.

Comments have been disabled for legal reasons

Read: ‘I was just screaming… It felt like someone threw fire in my face’: Acid attack victim >