A TOTAL OF 93 Irish beaches and marinas have been awarded Blue Flags this year, marking an all-time record.

The Blue Flag award is given to beaches and marinas that have excellent water quality and also maintain other standards including safety standards.

It is an international award which is operated in Ireland by An Taisce.

When the first awards were presented in 1988 only 21 flags were awarded. Beaches that receive the award follow specific criteria related to water quality, information provision, environmental education, safety and site management. 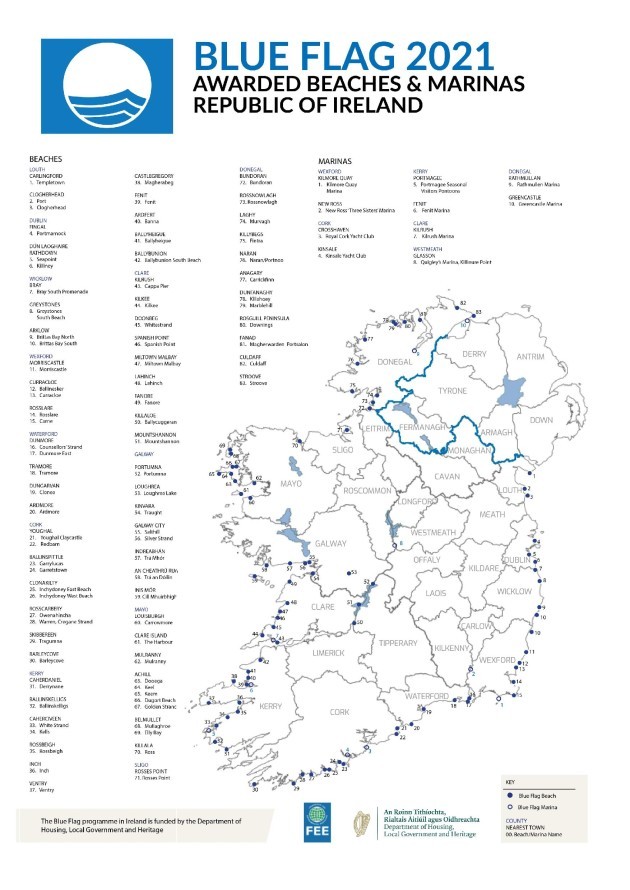 The counties with the most Blue Flags this year are Donegal and Kerry, which have 14 flags for their beaches and marinas.

In Cork Warren, Cregane Strand has regained Blue Flag status last held in 2013, while Inchydoney East has been awarded a Blue Flag for the first time. The awarding of these two beaches brings the total number of beaches awarded the Blue Flag in Cork to 10, the joint highest to date.

The retention of Blue Flag status at both Kinsale Yacht Club and Royal Cork Yacht Club means that Cork has a total of 12 Blue Flag beaches and marinas, a record annual haul for the rebel county.

Dun Laoghaire Rathdown County Council has been awarded a Blue Flag for Killiney for the first time since 2016.

Meanwhile, 63 Irish beaches have received the Green Coast Award, which recognises beaches that have a high environmental quality.