MARTIN O’NEILL WAS adamant that Ireland would find this latest trip to Tbilisi hard work, and it proved to be just that.

Shane Duffy’s first international goal gave them the perfect start but the away side played little football during a hugely-frustrating performance. They were second best for large spells and conceded before half-time with Valeri Kazaishvili finishing clinically.

Lucky to be find themselves one behind, the visitors rallied as the match opened up and they went in search of a late smash-and-grab.

It wasn’t to be and the draw leaves the Boys in Green second in Group D on 13 points from seven games. Serbia have opened up a two-point lead thanks to their victory over Moldova and third-placed Wales can narrow the gap with a favourable result against Austria tonight.

With temperatures as high as 34 degrees celsius this afternoon, Uefa made the decision to include scheduled water breaks throughout the game. However, Slovakian Ivan Kruzliak opted to do a u-turn just before kick-off after it cooled down considerably.

Having nursed an ankle injury all week, Jon Walters was passed fit to earn his 50th international cap and started on the right wing in a familiar 4-2-3-1 formation.

Ciaran Clark returned to take his place alongside Shane Duffy in the centre of defence, while Harry Arter partnered Glenn Whelan in midfield. The Aston Villa man was also handed the captain’s armband in the absence of Seamus Coleman. 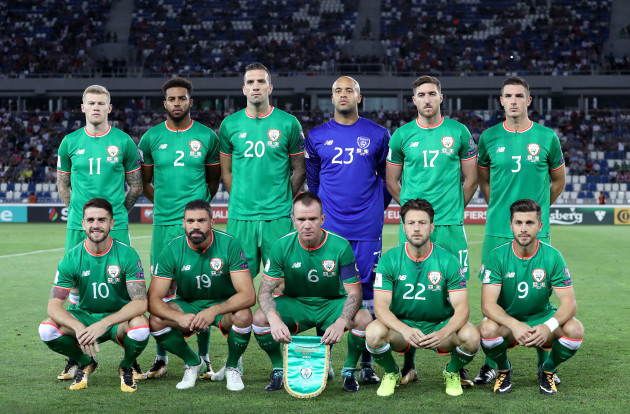 And it was the home side who threatened straight from the off. Spartak Moscow’s Jano Ananidze sent over a cross but Jambul Jigauri, coming in off the opposite wing, couldn’t connect at the back post.

Only four minutes had been played when the visitors were off the mark. A free-kick from just inside the Georgian half was lofted into the box by Cyrus Christie and Duffy rose highest to head into an empty net with keeper Giorgi Makaridze stranded.

Despite going in front, Ireland struggled badly to get a hold of the ball and string any amount of passes together as the home side dominated possession.

A rare knockdown from lone striker Shane Long fell at the feet of Walters and his cross was glanced just wide of the post by James McClean.

With Ireland sitting deep, they continued to invite their opponents on and Kakabadze drove a strike across the goal where Randolph punched away.

Sure enough, Georgia drew level on 35 minutes and deservedly so. Cutting Ireland’s midfield open, Valerian Gvilia found Ananidze, who skipped past a challenge before putting Kazaishvili in.

The San Jose Earthquakes attacking midfielder slipped the ball through the legs of Darren Randolph for his sixth international goal.

Ireland remained under the cosh as the first half drew to a close and Nika Kvekveskiri saw his deflected shot from distance stopped by the Ireland keeper before Makaridze saved another Duffy header. 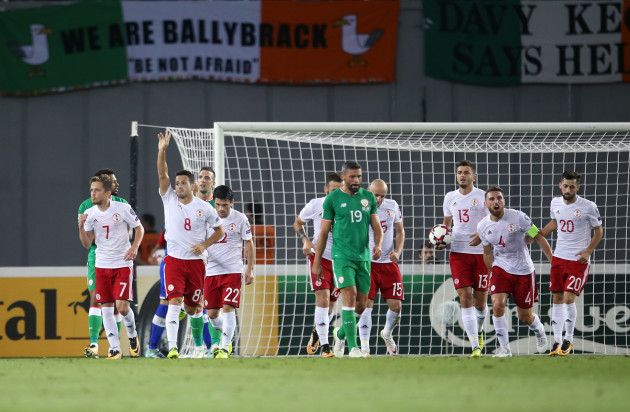 O’Neill resisted the opportunity to make changes in personnel at the break and the second half began in a similar vein with the excellent Ananidze driving just off target from 20 yards out.

Arter had a well-struck volley kept out by Makaridze and that was his last involvement as Aiden McGeady — the hero at this very stadium three years ago — was introduced with a half hour to play. The Bournemouth man will be disappointed with his performance.

That substitution saw Brady switched into the two in midfield and McGeady took up a position on the left flank.

As the game wore on, Georgia began to tire and Ireland were finding space in the opposing half with more regularity. Long should really have done better after latching onto Christie’s ball but headed over, then McGeady beat his man before shooting straight at a defender.

O’Neill went for broke and threw Nottingham Forest striker Daryl Murphy on for Whelan and the game could easily have gone either way in the final minutes.

McClean had a wonderful chance to bag a winner after Long’s hard work to keep the ball in play, but the West Brom winger’s attempt came off the back of a defender.

Substitute Merebashvili went close just before the board went up to reveal there would be four minutes of added time, and McGeady spurned a golden chance to repeat his trick of 2014 by volleying over.

Letter from Tbilisi: €2 tickets, the home of a famous Liverpool upset and Ireland’s need to win at all costs
James McClean makes £3,000 donation to young child battling eye cancer