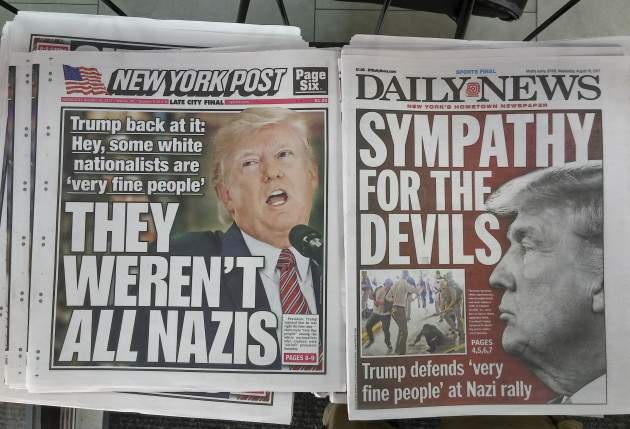 The front pages of several papers on newsstands in New York yesterday.

US PRESIDENT DONALD Trump has added fuel to the debate over the removal of Confederate statues that led to the murder of a protester in Charlottesville.

Trump tweeted this afternoon that the removal of US Civil War statues was “foolish” and he claimed that the “history and culture” of the United States was “being ripped apart”.

The tweets came 24 hours after the funeral of Heather Heyer who was killed while attending a counter-protest against white supremacists who were protesting the removal of a Confederate statue in the city.

Heyer was killed when a car ploughed into the protest she was attending.

The violence flared in Charlottesville when white supremacist activists, many of them armed, attempted to protest the removal of a large statue of Confederate General Robert E. Lee from a park in the city.

The city’s local council had voted to remove the statue and numerous similar statues around the US have been removed since.

In a series of tweets this afternoon, Trump said that he did not support the removal of the statues.

Trump’s referencing of George Washington echoed comments he made from a rambling press conference on Tuesday in which he questioned whether statues of the first president should be removed because he had owned slaves.

Historians have pointed out that while Washington owned slaves, he did not fight a war to maintain slavery, as is the case with General Lee.

Trump’s delayed response to the violence in Charlottesville was roundly criticised in the United States, as was his repeated contention that there was violence “on both sides”.