THE IRISH GOVERNMENT is “sleepwalking the country” into thousands of job losses which will result in those working in the aviation sector being permanently out of work according to the President of the Irish Airline Pilots’ Association (IALPA) Captain Evan Cullen.

Speaking on RTÉ’s News at One, he said Ireland is an outlier from other European countries in the approach taken to international travel, and particularly the use of antigen testing.

While Cullen acknowledged that public health is paramount, other EU states have embraced antigen testing based on scientific evidence, he said.

“Why is the Irish government taking a different approach to antigen testing than every Western European state,” asked Evan.

His comments come as hundreds of pilots gathered on the streets outside Leinster House ahead of Friday’s announcement from the government on the plan to reopen travel.

The union urged the government to urgently deploy rapid antigen testing for Covid-19 as part of the group’s four-point plan to reopen international aviation.

IALPA, which represents 1,200 Irish-based pilots, organised today’s event in which pilots attending were socially distanced and had taken a rapid antigen test.

He said the divergent approach Ireland is taking to the rest of Europe is “unacceptable”. 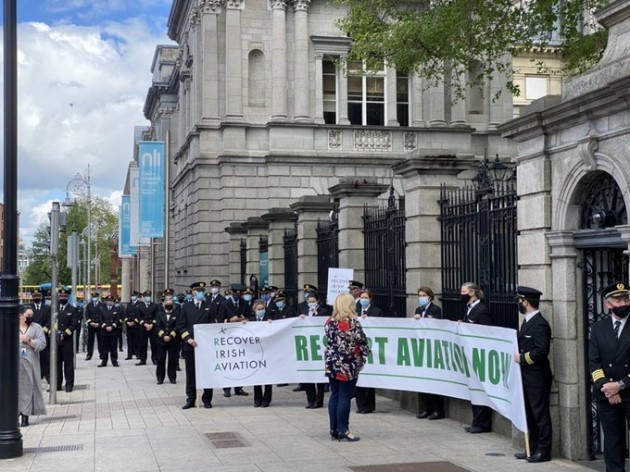 Pilots are urging the Irish government to take the same approach to travel as our European neighbours.

Ireland is the only country in the EU that is operating mandatory hotel quarantine, he added.

While many EU countries caution against non-essential travel, the Irish government says people should only travel abroad if it is essential to do so.

Gardaí can ask for evidence of the reasons for travel, and if not accepted, a person could be fined €2000 for unnecessary travel abroad.

Those in the aviation sector have been consistently pressing Government to introduce  antigen testing in our airports as a means to reopening air travel.

The EU’s Digital Green Certificate, a Covid passport for the EU, is expected to allow the safe return of tourism to EU countries after over a year of the Covid-19 pandemic.

Under EU proposals, people will receive a digital pass that can be scanned at an airport, indicating they have either been fully vaccinated, produced a negative Covid test from the previous 72 hours, or have recovered from the virus.

Some in government circles have highlighted the case of Denmark, which has opted for antigen testing to be allowed prior to entry instead of the more accurate, but more expensive, PCR testing.

The Green Cert is due to be introduced on 1 July, but member states will have the option of a six-week grace period before implementing the measures.

IALPA said Ireland should be ready to go to reopen aviation from that date, stating that any delay will only risk more jobs.

“The minister for health commissioned a report that recommends the use of rapid antigen tests for travel yet ignores its findings. This unscientific approach to public health policy serves us all poorly,” said Captain Cullen.

The government’s expert group on rapid testing recommended that the self-administered Covid-19 tests should be rolled out across a number of settings, including colleges and schools, as well as for public use.

The report said that there is “growing evidence” for asymptomatic antigen testing due the increased commercial availability of the tests.

However, despite the report being accepted in full by the government, some on the National Public Health Emergency Team (NPHET) continue to “strongly recommend” against the use of antigen testing among the general public.

When asked if the mixed messages coming from public health experts was confusing the public, the Tánaiste Leo Varadkar said two weeks ago that it is no secret that there are differing views held by some on NPHET.

He added that the use of antigen testing, as specified in the government’s report, is part of government policy now.

Unlike PCR, antigen tests work more effectively if a person is symptomatic but are not as effective at identifying pre-symptomatic cases.

Cullen said given the freedoms that exist to travel between Dublin-Belfast-London and vice versa, “it is entirely pointless to have artificial barriers in place in the CTA that have zero public health benefits”.

“Secondly, freedom of movement within the EU is an enshrined fundamental right of EU citizens. The Digital Green Certificate is a clear pathway to restore this freedom and Ireland should be a leader in this regard, not an outlier.

“Similarly, the importance of the USA as a tourist destination, an economic partner, and to the many Irish and American people who have deep connections across the Atlantic, cannot be overemphasised. Government should follow their EU counterparts and apply the same rationale to USA travel as EU travel. This is a measure that can be implemented immediately,” he said.

Taoiseach Micheál Martin is due to give a detailed statement on Friday on the next phase of the reopening which will include, travel, sport, and entertainment.