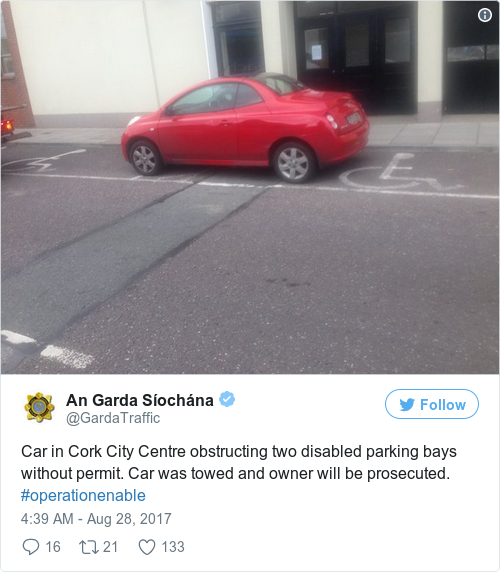 GARDAÍ ARE TO prosecute a driver who obstructed two disabled parking spaces in Cork.

The photograph above, taken by the Garda Traffic Corps, shows the red car parked across two disabled parking bays.

A nationwide clampdown on people parking in disabled spots without proper parking badges – known as Operation Enable – was launched earlier this year.

At the launch in February, gardaí said there has been an increase in the number of people using the spaces despite not having a physical impairment.

Since the campaign kicked off, gardaí have been targeting drivers that break the rules. 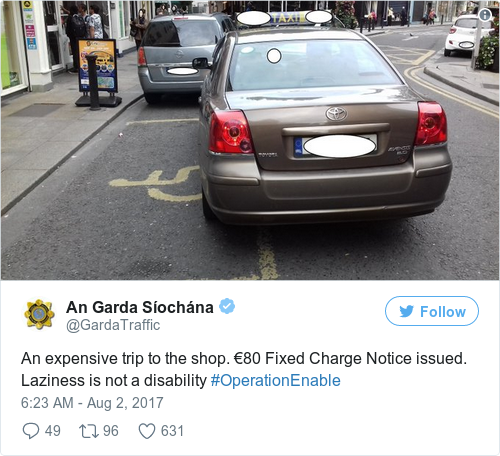 An expensive trip to the shop. €80 Fixed Charge Notice issued. Laziness is not a disability #OperationEnable pic.twitter.com/AmNpnSCWh8

In recent months, gardaí said there has also been a number of fake parking permits seized.

The permits include a legitimate-looking serial number and come with no expiry date, letting users get away with parking illegally for as long as possible.

Fines of up to €2,000 can be imposed on motorists who don’t adhere to parking laws. There are also heavier fines for those who are caught using fraudulent badges.

Tweeting about the case in Cork today, gardaí said the car had no permit displayed and was towed away.

Transport Minister Shane Ross previously said the illegal use of disabled parking spaces is totally unacceptable. He added that mobility is “a central issue for people with disabilities in our society”.