GARDAÍ IN WEXFORD were going about their business yesterday when they pulled in a car that had no tax.

After confirming that the car wasn’t taxed or in possession of a valid NCT cert, gardaí checked the insurance disc.

See if you can spot what the guards spotted. 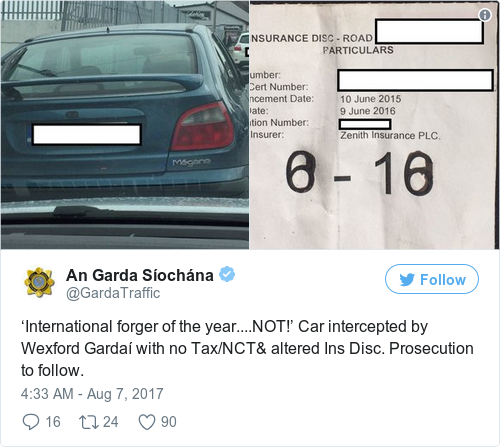 ‘International forger of the year….NOT!’ Car intercepted by Wexford Gardaí with no Tax/NCT& altered Ins Disc. Prosecution to follow. pic.twitter.com/anTHj8wQiF

Yes, the driver had attempted to mask their year out of date insurance with black marker.

In case you weren’t absolutely aware, altering your insurance disc is against the law.

Gardaí say that a prosecution will follow. The driver stands to be fined up to €2,000.