DUBLIN BUS HAS lost a tender to run 10% of the bus routes in the capital.

The company had tendered to operate 24 suburban routes, but has been told by the National Transport Authority (NTA) this morning that it has not been successful and lost out to UK transport company Go-Ahead.

A memo to employees from CEO Ray Coyne, seen by TheJournal.ie, says that Dublin Bus will engage with the NTA to make sure the transition to the new operators is “smooth”.

Coyne goes on to say that passenger numbers are growing and the BusConnects project will see €1 billion put into improving the network.

“This commitment to continuously improve our services will ensure we maintain a key role in the development of public bus transport in the city now and in the future.”

Of the six applications for the tender, four companies withdrew because they would be required to provide a new depot, meaning the final decision was between Dublin Bus and Go-Ahead. 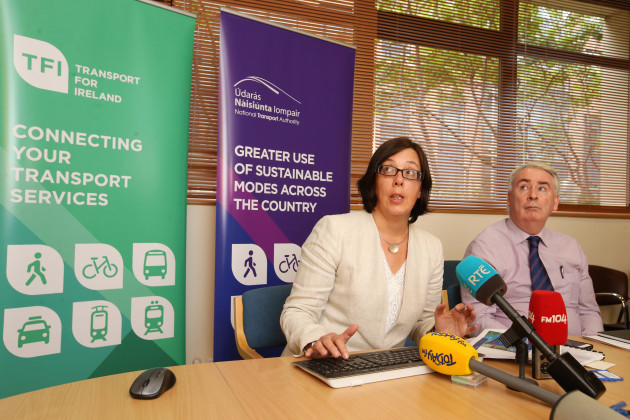 NTA CEO Anne Graham acknowledged concerns for a “race to the bottom” in terms of drivers’ pay, but said that the Go-Ahead proposal suggested this would not happen.

Go-Ahead is one of the largest bus operators in London and the NTA says it is “recognised as one of the most successful, consistently achieving high scores in customer service surveys by Transport For London”.

The company will begin running some of the 24 routes by the end of November 2018 and all routes by February 2019.

It hasn’t been disclosed whether Go-Ahead’s bid was cheaper than Dublin Bus’, but the NTA said that both efficiency and price were taken into account when making the decision.

What this will change

The NTA has maintained that this does not mean privatisation, and that there won’t be a change to routes, vehicles, fares, or frequency.

Routes currently operated by Dublin Bus that are included are the 17 (Rialto – Blackrock), 17A (Kilbarrack to Blanchardstown), 18 (Palmerstown – Sandymount), and the 45a (Dún Laoghaire – Ballywaltrim). 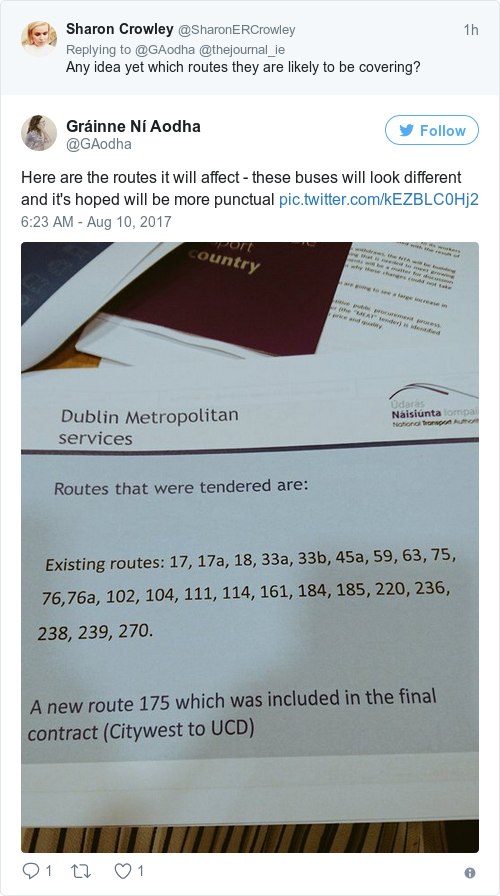 The routes, which go around the city centre, were chosen to avoid unnecessary complications for the new operator caused by Luas Cross City diversions.

While a commercial business will operate the routes, the NTA will retain ownership of the bus fleet and revenue while paying the company a fee.

Unions were originally opposed to the plan, with the NBRU and Siptu expressing concerns during the original consultation process, but an agreement was reached between both sides in 2015.

The NTA said this morning that unions weren’t informed of who won the tender before the media announcement.

In a statement reacting to the announcement, General Secretary of the NBRU Dermot O’Leary said that the move could lead to “industrial relations flashpoints”.

“The NBRU will focus our attention on ensuring that our affected members on the privatised routes will not be forced to move from their current workplace, we will also move to recruit those new entrants that will work for the private operator to ensure that they will be properly represented and work with them towards achieving similar terms and conditions as those workers we represent in the state-owned companies.

“This Tory-lite Government, disgracefully supported by the rag bag Independent Alliance, would be wise to restrict this foray into the privatisation of publicly-owned transport services to the routes identified, moving beyond will not only be vehemently opposed by the NBRU, but will inevitably lead to major industrial unrest across the public transport system.”

Solidarity TD Paul Murphy said it was a “giant leap backwards” for workers and commuters.

But Chief Executive of the National Transport Authority Anne Graham said that Dublin Bus drivers would not be compelled to work for the new operator.

She added that it would be up to the new operator to decide the pay packages for their employees, but added that “from our assessment the operator will be offering reasonable pay”.

The contract is for five years with an option for it to be extended by another two. The contract will be signed after Go-Ahead confirms that it can put its depot in place within 12 months.

– With reporting from Gráinne Ní Aodha

Read: Do you use these buses in Dublin? A new operator on 10% of routes will be announced today