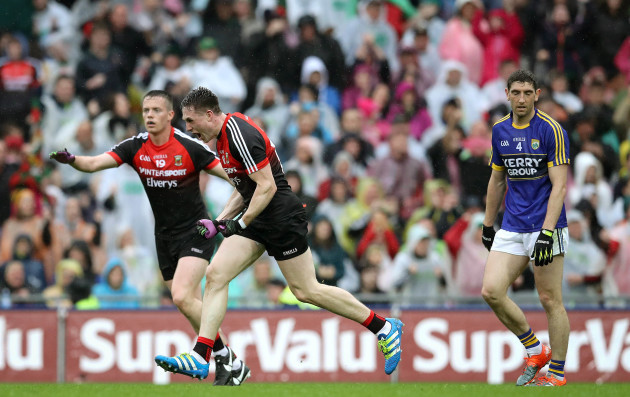 PADDY DURCAN PROVED Mayo’s hero as his injury-time point salvaged a draw against Kerry in Croke Park today and ensured a replay will be required for this All-Ireland semi-final tie.

Kerry had one late chance to win it but Bryan Sheehan’s tricky long-range free from distance dropped short and Mayo cleared their lines before the final whistle sounded soon after.

See you back here next Saturday? Kerry and Mayo will have to do it all again next weekend after an epic semi-final ended in a draw (?: INPHO / James Crombie)

Mayo’s marathon summer continues after a game where they netted twice in the first half courtesy of Andy Moran in the 4th minute and Colm Boyle in the 19th minute.

Kerry’s defence was prised apart regularly in the opening stages with Moran finishing superbly to the net in front of Hill 16 while Boyle scythed through for their second goal.

Mayo nearly bagged a third goal in the 23rd minute but Moran and Cillian O’Connor were denied as the ball bounced around the Kerry goalmouth before Moran’s shot was deflected over the bar. 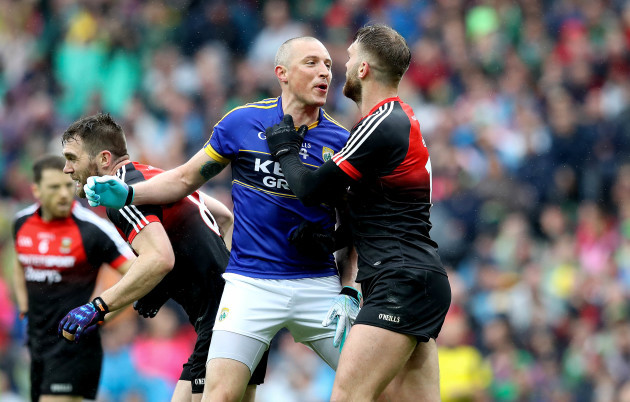 But Kerry were level at the break, 2-5 to 1-8, with Stephen O’Brien raising their green flag in the 13th minute after being released into space by Kieran Donaghy. They reeled Mayo in during the closing stages of the first half as Paul Geaney and James O’Donoghue picked off points from frees.

Geaney landed the opening point of the second half but then Mayo began to play at an increased tempo with Moran, Donal Vaughan, O’Connor and Tom Parsons notching the points that pushed them three clear.

But then Kerry pounced for their second goal in the 45th minute. David Clarke produced a splendid save to deny David Moran yet Kerry’s captain Johnny Buckley rushed in to net the rebound.

That score brought the teams level at 2-9 apiece and the action ebbed and flowed from there until the final whistle. The teams were level on five further occasions with Kerry going in front four times and Mayo ahead just the once after Cillian O’Connor’s 61st minute point. 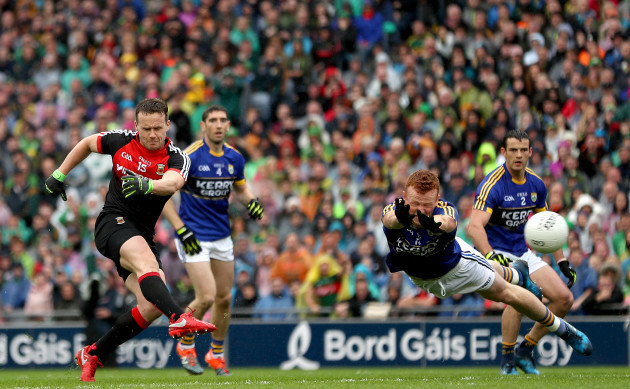 Barry John Keane swivelled onto his left to bring Kerry level before Paul Murphy looked to have grabbed a priceless winning point for Kerry in the 69th minute.

But Mayo finally found their range in injury-time through Durcan and ensured round two will take place next Saturday afternoon.