ED SHEERAN HAS been praised for recalling 10,000 UK tour tickets that were bought and then resold (or put up for sale) on unauthorised ticketing sites.

The singer has announced that he will resell the tickets on authorised ticketing sites; his team said that only UK tour tickets were affected.

Dublin North West TD Noel Rock praised Sheeran for the recall: “It is a positive step forward that Ed Sheeran has taken this measure to protect his true fans from being extorted of their hard-earned money.”

He urged the Irish government to take action to prevent this from happening, and has called on TDs to support his ‘Prohibition of Above-cost Ticket Touting Bill 2017’, which is co-sponsored by Stephen Donnelly.

Over 300,000 tickets have been sold for the singer’s seven dates in Cork, Galway, Dublin and Belfast.

Irish tickets are being sold with heavily inflated prices on ticket reselling site viagogo.ie for up to €945 per ticket.

Tickets for the seven dates across Ireland were originally sold through Ticketmaster for €81 and €91.

A statement on the singer’s website said that this was a breach of the terms and conditions of the sale:

Ed’s promoters alongside the National Trading Standards Cyber Crime team have identified many multiple purchases which are in contravention of the terms and conditions for the sale of the Ed Sheeran tickets.

The recall only affected UK tour dates, the statement said. 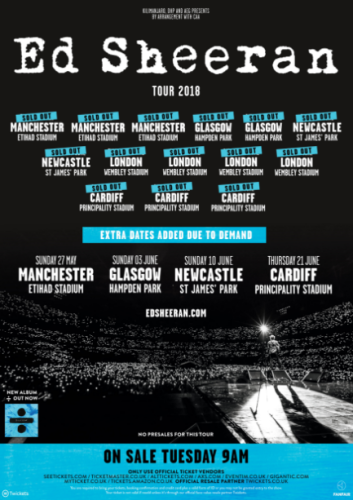 Sheeran and his team also urged people not to buy unauthorised sites. A list of the official ticket vendors are:

– With reporting from Hayley Halpin