KILKENNY LEGEND, AND eight-time All-Ireland winner, Michael Fennelly was approached by Arthritis Ireland a few years ago inviting him to speak publicly about a condition he has been living with since 2005. 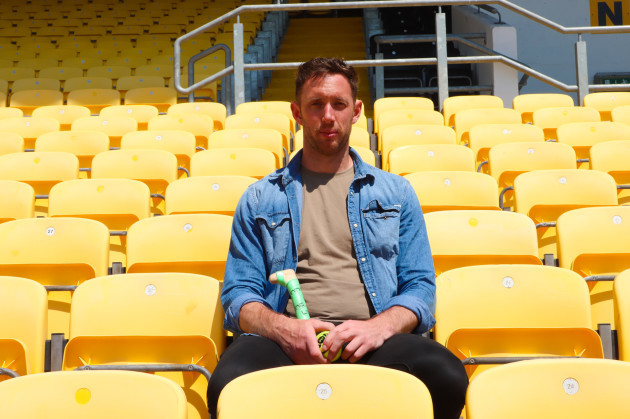 At the time, he wasn’t ready to open up about that side of his life. Although he was no stranger to injury-related stories in the press, he had kept this piece of medical information largely private.

Fennelly’s issues date back to when he was 19 and spending a lot of time on the physio table for back pain. Within a year, he discovered that he had a form of arthritis called Ankylosing spondylitis [AS].

His father, Michael snr, also received the same diagnosis just before his son. The condition affects the spine, but can also cause pain or swelling in the shoulders, hips, knees, heels, chest/ribs and small joints of the hands and feet.

Up to 33,000 people are living with AS in Ireland, and it can take an average of eight years to diagnose.

For Fennelly, he sensed a change in himself recently. Parents of children who are living with AS were contacting him for advice about how best to manage the condition.

Knowing that people were struggling with the same illness as him, those conversations set off a spark and he decided that now was a good time to lend his voice to a new awareness campaign about inflammatory arthritis.

“It just kind of hit home how people are struggling with it,” the former Kilkenny star tells The42, “and I’ve struggled myself with it but I had a lot of support in terms of the Kilkenny medical team.

“So I would have had that expertise around me and that’s what got me through a lot of it. I suppose it is important to bring a bit more education and awareness around it, not so much about me but the condition more than anything.

“It’s tough but there is light at the end of the tunnel, there are ways around it. If I can play for Kilkenny for 12 years, certainly people can play at club level or whatever sport they’re in.”

The AS diagnosis brought huge relief for Fennelly back in ’05. He finally had a label to pinpoint the root of his symptoms, while also having his father alongside him who was living through the same experience.

He was even able to use some of his father’s medication at times to alleviate certain symptoms that were flaring up.

That being said, learning to be a patient of AS brought challenges for Fennelly too. There were periods of severe struggle in which he needed to put a hot water bottle on his head or neck every single night, just to help reduce the pain.

Selecting the right footwear was also crucial for Fennelly. A shoe with no sole in it would “rip me apart” and leave his back crying out in agony.

Between 2013 and 2014, he lost 9kg and was suffering with a lot of breathing and issues relating to tightness in his lower back. Hurling for Kilkenny exacerbated the pain, due to the high demands of the game.

The fact that AS didn’t have a common association with young people at the time didn’t help Fennelly either.

“It’s very hard to explain it and I still struggle to explain it,” he says, referring to the time when AS resulted in massive weight loss.

“We tried different things to try and settle it and nothing was working. I was thinking I was stiff down there and needed to be worked on in terms of manually therapy, to try and break me up and loosen me out.

“I went do different people and within a day I was back to square one again. That caused havoc alright. I lost a lot of weight, I wasn’t sleeping well. I wasn’t exercising or taking part in any training sessions. I wasn’t able to do anything so that was frustrating.

“I had no-one to benchmark myself off and I didn’t know what’s normal and what wasn’t normal. ‘Is the pain as bad as it is?’ You’re kind of questioning yourself and back when I was 21, 22, there wasn’t a hope in hell I was telling anyone I had Ankylosing Spondylitis [AS] because they’d start laughing at ya. And if you mentioned you’d arthritis, people would be like, ‘That’s for 80-year-olds.’

“Probably one of the biggest side-effects, you could have mood swings in one sense. When I had pain really, I went quiet and wouldn’t really talk. You’re just in pain, and rather than just sit there and try to lie down or whatever, and wait for it to go away.

“There’s been bad times and good times, and to be honest, you forget the bad [times] quickly enough. It’s not good when you go through it but you do forget it and move on.”

It was Fennelly’s choice to remain private about his situation, but it was equally difficult not to be able to offer some clarity when others could see that he was prone to injury.

“I wouldn’t go into much detail on it because it had gotten to a stage where I was getting so many injuries, and you’re obviously thinking, ‘What is the situation here?’ In some ways it’s better if players do know about it. After a while, they did realise it. That’s probably the challenging part.”

Some 16 years after receiving his AS diagnosis, Fennelly feels positive about exposing this part of his life to the public.

A college lecturer who is the current Offaly manager, Fennelly enjoys helping people and this campaign has allowed him to offer advice to those who are beginning their own journey with AS.

There are difficulties to face with the condition and flare-ups happen from time to time, but he’s happy to report that life is good for now.

“At the moment, I don’t feel too bad. I was talking to someone who actually has AS and they were asking about different things that work for me.

“I have a bit of chronic pain and muscles are all tight. It’s still there but I’m able to manage it better. I’m not throwing myself around the hurling field getting knocks and high intensity hits.

“I do a bit of walking and running and try to keep the body as strong as possible. And try to maintain that strength, what I’ve built up over the years. So, yeah, definitely in a better place but some weeks can be very bad and other weeks you feel 100% fine and normal.”

Michael Fennelly was speaking as part of the Back in Action campaign from Arthritis Ireland, which aims to make people more aware of ankylosing spondylitis (AS).