THE UK GOVERNMENT has officially announced that it wants to leave the customs union in order to negotiate a new deal with the EU.

Britain’s Brexit negotiator David Davis and chancellor Philip Hammond have previously said the UK would leave the customs union, but this is the first official evidence of their intention.

However, there is still a lot of confusion around what would replace it. The UK government’s document outlining this intention lists two possible options: a “highly streamlined customs arrangement” or a “new customs partnership” with the EU.

Speaking to BBC’s Radio 4 Today programme earlier today, Brexit Minister David Davis said he wanted a “shortish” period after the Brexit negotiations conclude where the UK remains a part of the customs union, while looking to negotiate other trade deals elsewhere.

The customs union allows EU countries to trade more freely with one another, as it imposes the same regulations and duties levied on imported goods.

A change to this would impact greatly on businesses in the UK and the EU that do business with one another on a regular basis. In order to prepare businesses in Europe for the change, the UK is suggesting that an interim strategy be put in place. 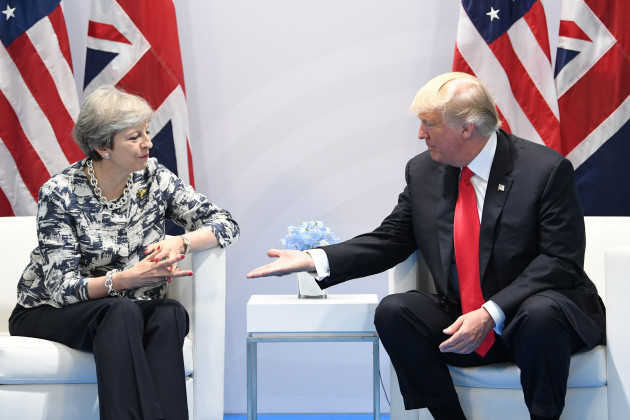 Prime Minister Theresa May could strengthen trade relations with the US if the UK were to leave the customs union.

The UK has emphasised in the announcement that the new, “ambitious” deal would allow the “freest and most frictionless possible trade in goods” between the UK and the EU, although failed to mention any specifics of what it wants.

“The UK is proposing two different ways that would best meet these goals,” the UK government’s statement said, listing its suggestions as:

A highly streamlined customs arrangement in which the UK would manage a new customs border with the EU, streamlining and simplifying requirements to the fullest extent possible through negotiated and unilateral facilitations which reduce and remove barriers to trade, or…

A new customs partnership with the EU, based on alignment of our customs approaches, which would negate the need for a customs border between the UK and the EU.

However, Guy Verhofstadt, one of the EU’s Brexit negotiators, described aspects of the plan as “fantasy”.

He previously said: “If you want the advantages of a single market and customs union, you have to take the obligations.”

To be in & out of the Customs Union & "invisible borders" is a fantasy. First need to secure citizens rights & a financial settlement

Those obligations include trading with countries outside the EU in the same way as other member states do – which is the exact restriction the UK is trying to avoid.

The proposal for a transitional arrangement was welcomed by the Confederation of British Industry, Britain’s big business lobby group.

The European Commission, the EU’s executive arm, said it would “take note” of the proposals, but warned:

‘Frictionless trade’ is not possible outside the single market and customs union.

The EU’s chief Brexit negotiator Michel Barnier also repeated that talks on the future trading relationship could not begin until progress was made on other issues, including Britain’s exit bill.

Davis said the UK government was “making no apologies for being ambitious” in seeking to remain in the customs union for a temporary period while trying to negotiate deals with other world powers at the same time. 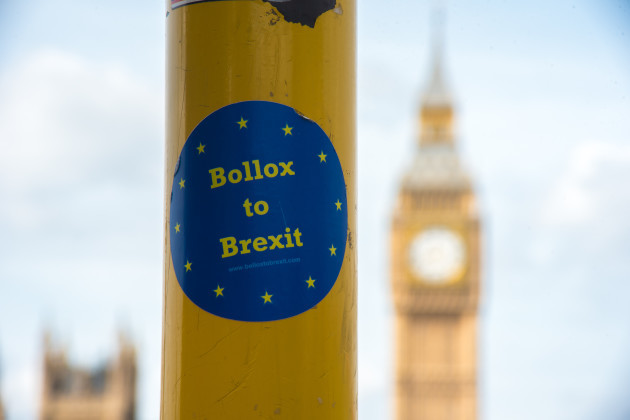 An example of the anti-Brexit sentiment.

He said: “We’re being assiduous … we’re being good European citizens.

This proposal is to the benefit of the EU, as much to us.

When pressed on the divorce bill that the UK would be required to pay to the EU, Davis said: “I’m not going to do the negotiation on air.

“You will find it difficult sometimes to read what we intend. That’s deliberate.

In negotiations, you do have constructive ambiguity from time to time. That’s where we are.

Jean-Claude Juncker, the President of the European Commission, told British Prime Minister Theresa May that “Brexit cannot be a success” at a dinner at Downing Street in April, adding that Britain will not even be in the customs union.

What does this mean for Ireland?

“It’s too early to say, but it’s pretty bad news for us that they won’t stay in the customs union,” Fianna Fáil’s Brexit spokesperson Stephen Donnelly told TheJournal.ie previously.

He said that any kind of ‘streamlined’ border, as suggested by the UK in the above statement, could easily turn into a hard border.

If we have to check goods in discreet warehouses on the side of the road, that sounds good.

But if we’re going to have to start checking IDs, checking passports, then there’s a queue, and behind the official is men and women with guns … then we’re back to a border.

Tomorrow, the UK government will set out its solutions for the border between Northern Ireland and the Republic, ahead of the third round of Brexit negotiations at the end of the month.

A spokesperson for the Irish government told TheJournal.ie that it welcomes “more clarity from the British government”.

It said: “The immediate focus for the coming rounds of negotiations remains on advancing the issues that have been identified by both the EU and the UK for Phase 1 of the negotiations, including citizens’ rights, the financial settlement and the Irish specific issues.

In this regard, the Government welcomes the UK’s intention to publish a second position paper, on Northern Ireland and Ireland specific issues, later this week.

The president of the Irish Farmers’ Association Joe Healy said that the UK’s position effectively amounted to a hard Brexit.

“The first option would see the reinstatement of a customs border between the EU and UK. This is a very retrograde development for trade on the island of Ireland and between Ireland and Britain, after forty-five years of EEC/EU integration.”

The second option, of a ‘customs partnership’ between the EU and UK is simply not an acceptable outcome for the agriculture and food sector, as even under this arrangement, the UK would still be committed to pursuing their own trade policy for imports into the UK.

Read: Britain will tell us what they plan to do with the North this week