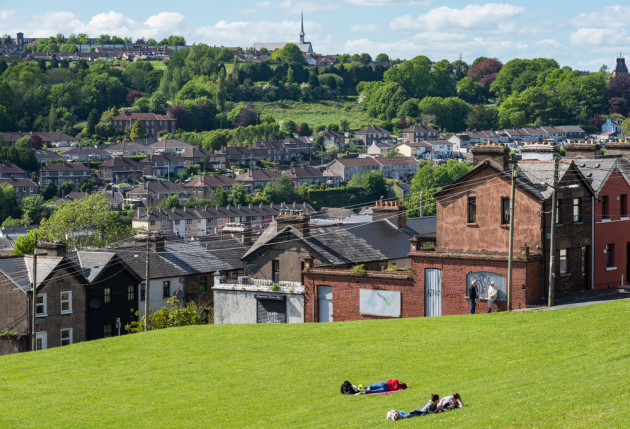 Cork city on a sunny May day this year

THIS WEEK, CORK City Council voted unanimously to reject a proposal from the Cork County Council to take over a portion of its land, which would have seen the city’s population increase by almost a third.

Cork County Mayor Declan Hurley was not impressed. He said that the city had been given a “very generous proposal” and that he and other councillors were “disappointed by the obvious lack of adequate assessment and consideration” of the proposal.

In a heated statement this week, Hurley went further saying that government plans were “more reminiscent of a child’s scribble on a map than a logical, considered conclusion”.

Cork City Lord Mayor Tony Fitzgerald, however, said the plans weren’t ambitious enough. He told RedFM that the proposals from the county council were “limited” and would mean Cork gets left behind by cities such as Belfast.

So, what’s going on here? Why are Cork County and Cork City arguing over the boundary between the two?

In April 2017, a review commissioned by the Department of Housing the previous year was published.

Called the Report of the Expert Advisory Group on Local Government Arrangements in Cork, or the MacKinnon report, it was tasked with looking at the various options for the future geography for local government in Cork.

It highlights that Cork “cannot be complacent about its future”.

The report said: “Other city-regions in Ireland are making conscious preparations to grow, develop and respond to new opportunities, and they could potentially challenge Cork’s place as the natural location to act as a counter-weight to the Dublin area and eastern seaboard”.

Its chairperson Jim MacKinnon said: “We focused on what we regarded as the key question, namely what governance and delivery arrangements would best drive sustainable economic growth and strengthen Cork’s position as Ireland’s second city.

On balance we felt that an expanded city council offered the best solution. It provided a clearer identity for the structure of local government and a stronger focus on the needs and demands of the metropolitan area, including regeneration, while also recognising the specific service needs of rural areas.

The report proposes extending the current remit of the city council to include Ballincollig, Carrigrohane, Blarney, Glanmire, Carrigtwohill and Cork Airport, which would see the population of the city almost double to 225,000 people. 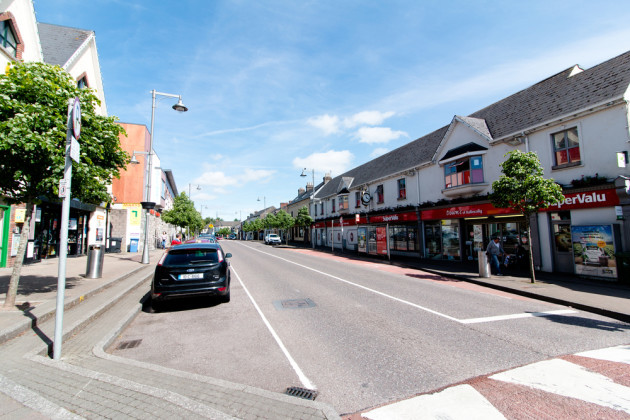 It also suggested a payment of €40 million from the city council to the county council to compensate for the loss of local tax revenue.

This expanded city would have a Cork Economic Development and Planning Board which acts as a “unified voice on strategic economic development, housing and infrastructure issues affecting the wider Cork area”.

All of these recommendations, the report says, should be in place so that “new local government structures can take office following the local elections scheduled for 2019″.

“Here’s what we’ll give you”

Just a few weeks after the publication of this report, Cork County Council put forth proposals that would see 31.95 sq km ceded to the city council. 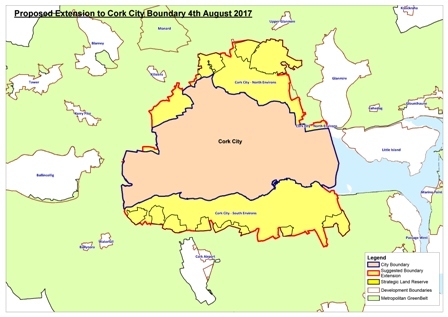 While it offered areas such as Doughcloyne, Donnybrook Grange, Rochestown, Kilbarry and Kilcully, it did not include the above areas mentioned in the MacKinnon report.

Cork County Council said: “This is an 84.5% increase in the geographical size of the city to 69.76 sq km. As a comparator, Dublin City Council area is 115 sq km.

Cork City Council will be nearly two-thirds [the] size of Dublin City Council area. As a second city, this is a reasonable proposition. [There will be an] immediate population transfer of 39,258 to the city to make a city population of 164,915. This is a population increase of 31.2% immediately.

The county council also said that there would be an immediate transfer of commercial rates and local property tax to the city council to the tune of €16 million.

It added: “In proposing this alteration to the city boundary, the council is promoting a significant opportunity to grow a city that reflects the core principles of an urban city”.

Cork County Council issued a very strong statement towards the end of this week, where it was sharply critical of the MacKinnon report.

Mayor Declan Hurley said: “It is quite clear that whoever sketched the boundary line for the Mackinnon Committee has little or no knowledge of the geography of Cork.

Actually, it’s more reminiscent of a child’s scribble on a map than a logical, considered conclusion. It is a matter of complete wonder to me how anyone could believe that it would work in reality.

He said that communities in these areas would suffer from a reduction in funding, and said that for residents of Carrigtwohill to be regarded as city dwellers “is nothing short of a joke”.

“Except that this is no joking matter,” he said. “For businesses in Blarney to become city ratepayers is ridiculous. It’s simply madness.”

“Thanks, but no thanks”

At a meeting of Cork city councillors during the week, a unanimous decision was made to reject the county council’s offer.

The limited areas on offer from the county council was cited as a chief cause, and councillors said failure to implement the full recommendations of the MacKinnon report would risk Cork being left behind.

The CEO of Cork City, Ann Doherty, took the move to issue her own statement on why following the proposals put forth by the county council would be a bad idea.

She said: “It has been made clear by the oversight group (to both Chief Executives) that it cannot accept alternative proposals that run contrary to the proposed broad boundary changes set out in the Report of the Expert Advisory Group”.

Doherty said that, with local elections coming in 2019, it was urgent to implement changes as soon as is possible as any delay would create a “degree of uncertainty and instability that would be damaging to both Cork city and county, and indeed beyond”.

“Only show in town”

Cork City Councillor Sean Martin told TheJournal.ie that the MacKinnon report is the “only show in town”.

“It’s about making Cork a global city,” he said. “What we want to see is the recommendations in that report implemented.”

Martin said that the offer on the table from the county was not “feasible” or “practical” and that both parties needed to work with the implementation teams to make the recommendations in the MacKinnon report a reality. 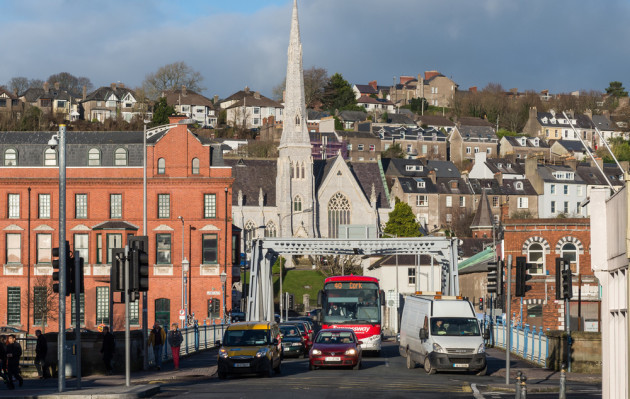 “My opinion is that everything else is a distraction,” he said. “The county has a stake in this, of course. The financial details have to be worked out. They have to be properly reimbursed.

He added that he expected both councils to come together to find the best solution for the future of Cork.

Cork City councillors are keen to make sure the city and county is not left behind when it comes to future economic development.

Doherty said that the city’s path forward is contingent on having the “capacity, authority, and governance independence” it needs to grow and develop. She said that she feared that Cork could slip to become Ireland’s third or fourth tier city if changes are not made.

City Lord Mayor Tony Fitzgerald said that cities such as Belfast have a natural advantage over Cork because it is designated a global city. He added that Cork’s population would be one sixth less than the current population of Belfast in a decade’s time.

The MacKinnon report, however, has received the green light from Housing Minister Eoghan Murphy. 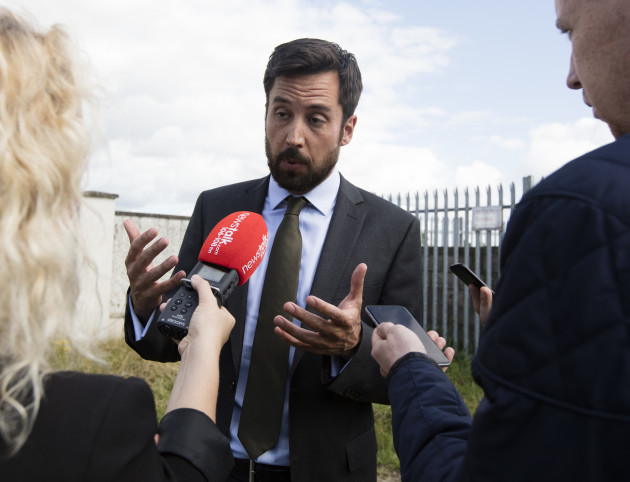 In the Dáil last month, he said that works were already underway to see its implementation.

He said: “The changes recommended by the Cork Expert Advisory Group report represent the most significant population transfer associated with a local government boundary extension in Ireland.

To ensure that the challenges of implementation are addressed effectively, an Implementation Oversight Group is to be established to oversee the process.

In response to a query from TheJournal.ie, the Department of Housing said: “The group’s first task is to present a detailed implementation plan by September 2017 and the chief executives of Cork City Council and Cork County Council will work with the group to develop detailed and comprehensive proposals for the boundary alteration and to ultimately implement agreed recommendations”.

In the terms of reference for this implementation group, it says that the group “shall provide such direction, guidance and advice to the local authorities… as it considers appropriate”.

Furthermore, it says that CEOs and staff at both councils are required to “cooperate fully” with the implementation group.

Responding to the city council’s rejection of its proposals, Cork County Mayor Declan Hurley said: “The elected members of Cork County Council are unanimous in their support for this offering and we believe that it represents a great opportunity to achieve a successful outcome for this issue and for Cork as a whole”.

On the topic of an implementation group, Hurley had reservations.

He said: “Its workings appear to run contrary to all commentary to date which emphasised that both the City and County should seek to reach agreement on the matter”.

I would stress that the county is only participating in the workings of the implementation group on a ‘without prejudice’ basis. We have been very clear in advising the implementation group that we will not be in a position to submit any boundary line as an agreed proposition until such time as proper discussion and consideration has been undertaken by both councils on the matter.

With the two councils appearing quite far apart in terms of a consensus at the moment, the government’s implementation group will have a tough task on its hands trying to reconcile these differences.