A FIVE-METRE-tall sculpture in red, yellow, green and blue has been unveiled on a plinth outside Dublin City Hall today.

The sculpture, titled RGB Sconce, Hold Your Nose, was created by artist Alan Phelan. It was formally unveiled by the Lord Mayor of Dublin Alison Gilliland.

It’s the first of six new sculptures being created as a part of the Sculpture Dublin initiative, and will be on display for one year.

The work is partly inspired by the 1884 Dublin Castle Scandal, which was when Irish Nationalists accused high ranking British civil servants of ‘homosexual activities’, which culminated in a number of criminal trials.

Following a “competitive commissioning process”, Phelan was awarded the commission in December 2020 for the temporary sculpture, which will stand on the O’Connell Plinth.

“I am honoured to have been selected to create this very special work for the city,” said Phelan. “Sculpture Dublin is an incredibly important initiative to bring contemporary sculpture into the public awareness. I would like to thank all the team for their wonderful work and support over the past year in reaching this point.”

He added: “I have always been very interested in presenting alternative and inclusive readings of our shared history and the location of City Hall is the perfect emblem to express these interpretations. I wanted to make a sculpture that looked familiar yet was rooted in a tangle of historical references that bring different contexts and content to the work.

“I hope Dubliners will enjoy this new sculpture and create their own multiple interpretations and personal meanings from it.”

The brief for the initiative asked artists to respond to the historical plinth, which has stood empty outside of City Hall for over 150 years. The plinth was originally constructed to support the monumental statue of Daniel O’Connell, The Liberator by John Hogan,  which is now located inside the building.

Sculpture Dublin wanted to bring sculptures to the empty plinth. 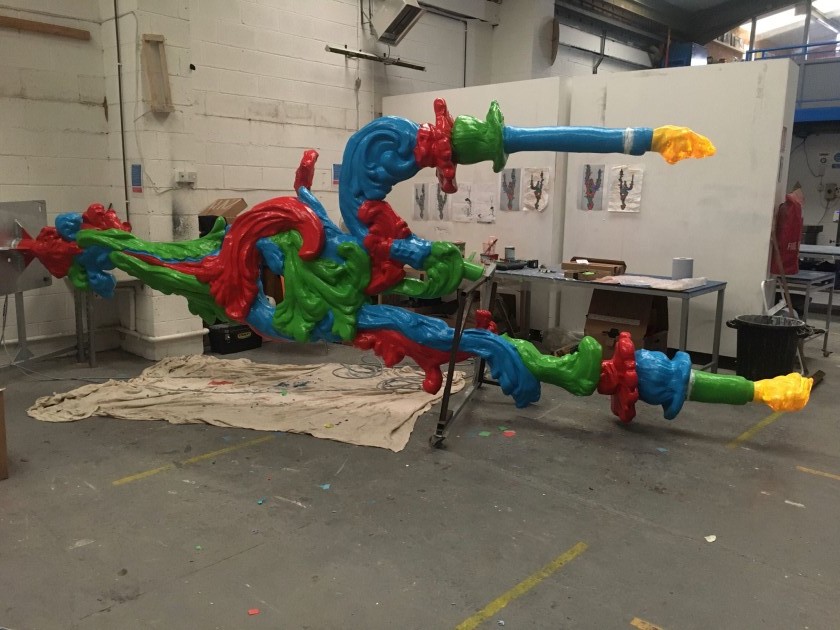 The sculpture in the studio, before it was placed on the plinth.

For RGB Sconce, Hold Your Nose, Alan was inspired “by the celebration of different forms of emancipation that have occurred in the area, moving through Irish independence, EU Presidencies, tribunals of inquiry, and important civic events related to marriage equality and reproductive choice”.

City Hall itself contains many histories and stories from commerce through to civic council chambers, to active participation in a new Ireland. Alan wanted to emphasise the symbolic power of the location.

One historical reference in the piece is stucco plasterwork, which people will recognise from the city’s Georgian architecture.

The piece is a 3D printed plastic and paper covered sconce – unusual when we’re used to seeing sculptures made of stone or bronze. A sconce is a wall-mounted candle holder. In making it, Phelan wanted to nod to not just Georgian architecture, but the Baroque and Rococo art styles.

The subtitle of the work – ‘Hold Your Nose’ –  comes from a poetry pamphlet that was published during the 1884 Dublin Castle Scandal. This was when Irish Nationalists accused high ranking British civil servants of ‘homosexual activities’, which culminated in a number of criminal trials.

The poem from the time instructs “decent men” to “hold their noses” – so as not to breathe in the perceived debauchery of the castle.

Reclaiming this little known history and subverting this term to show how much Ireland has changed was of significant importance to Alan.

The artist also uses the colours bright red, green, and blue a lot in his work. Because all of the colours come from the mixture of red, green, and blue, Phelan sees this as signifying the diversity of modern Dublin. Meanwhile, the candle flames could be seen by some as looking like torches, which links the sculpture to ideas of enlightenment and knowledge – but Phelan says that his work is open to interpretation.

Lord Mayor of Dublin Alison Gilliland said at the unveiling: “It brings me great pride to unveil this important inaugural piece for the Sculpture Dublin Programme today. Sculpture has played such a vital cultural and aesthetic role in Dublin life, now and historically, and the various stories and perspectives reflected in this contemporary artwork strive to create a shared sense of time and place. The past 18 months have been incredibly difficult for the people of Dublin and our arts community in particular.

As we move together and begin to re-engage with each other and our city I welcome this inspiring symbol of hope, now placed on the historic O’Connell Plinth, and I hope it becomes a destination piece among our many sculptures throughout the city. I want to congratulate Dublin City Council for continuing this ambitious programme throughout the pandemic and I wish them all the best in future unveilings.

Programme Director of Sculpture Dublin, Karen Downey, said; “The O’Connell Plinth has stood empty in the centre of Dublin for over 150 years; a plinth without a purpose. Alan’s sculpture has brought it back to life in a really exciting way that reflects the historic, contemporary and diverse city of Dublin and its inhabitants. This unveiling is the culmination of over a year of hard work and collaboration and I am looking forward to the rest of the programme’s unveilings.”

After a survey of sites in 2019, locations for the new commissions were identified in each of the five Dublin City Council Local Administrative Areas. Sculptures will also be created for the new Ballyfermot People’s Park, Ballyfermot; Bushy Park, Terenure; Smithfield Square Lower, Kildonan Park in West Finglas and St Anne’s Park, Raheny.