THE EXTRACTION OF gas through fracking goes against international human rights law, according to a new study by Irish researchers.

Fracking is a process for extracting gas by drilling into shale rock and injecting pressurised water, sand and various chemicals to force out the gas.

The report, prepared by human rights law students at NUI Galway’s Centre for Human Rights, argues that fracking must be banned worldwide as the dangers posed by the extractive process cannot be offset by merely regulating the process.

The NUIG report points to a significant body of scientific evidence that outlines the danger posed by the industry to health, water, air, farmland soils and the general economic vitality of communities where the industry is established.

In the US, for example, the industry is linked to various health impacts, while a recent study from Cornell University found that rising levels of methane – a potent greenhouse gas – is linked to emissions from the fracking industry.

In Ireland, a 2017 study from the Environmental Protection Agency found that the practice has the potential to damage human and environmental health.

Therefore, the NUIG report argues, fracking is incompatible with countries’ legal obligations to protect, respect and fulfil basic human rights including the right to life, health, water and a healthy environment. 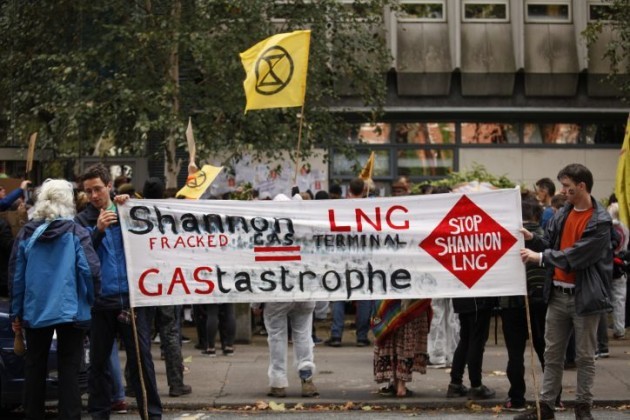 Calls for strong voice at UN

As the Republic of Ireland has become one of the first countries in the world to ban fracking, the NUIG law students are calling on the State to sponsor a UN General Assembly resolution for a global ban on fracking. The students have drafted the wording for a resolution and sent it to the Minister for Foreign Affairs Simon Coveney to consider.

Bridget Geoghegan, one of the report’s authors, said that the proposed resolution outlines that fracking is an “inherently harmful extraction process that has global impacts no matter where it is conducted”.

“No amount of regulation can adequately address all the problems that fracking causes,” she said, adding that the proposed resolution is in line with principles outlined in the State’s new policy statement on fracked gas imports.

Last week, the Minister for the Environment Eamon Ryan released a policy statement outlining a moratorium on the development of fracked gas importation pending the findings of a State review on security of energy supplies.

Introducing a ban on the importation of fracked gas was one of the climate policies in the Programme for Government following pressure from Green Party members and grassroots environmental groups, Ryan said.

Renewed fracking fears in the North

The NUIG report was officially launched at an event this evening featuring speakers from affected communities in the US and Namibia, as well as guests from Fermanagh, a county with large deposits of shale rock.

Fracking is yet to be banned in Northern Ireland and there are currently live licence applications for exploratory drilling in the Lough Allen area.

The Department for the Economy recently put out a tender for a research project to examine the “economic, societal and environmental impacts of future onshore petroleum exploration and production”.

The study includes an examination of unconventional oil and gas (UOG) production, under which the practice of fracking would fall.

The study was commissioned soon after a cross-party motion unanimously passed in the Northern Ireland Executive in October 2020 that called for legislation to be introduced to ban any new licensing for oil and gas exploration.

WHAT THE FRACK investigation

Do you want to found out if there is a renewed risk of fracking on the island of Ireland?

The Noteworthy team want to investigate the reasons why authorities in Northern Ireland are pushing ahead with a study of the economic, societal and environmental impacts of fracking despite well-documented health and climate impacts.

Here’s how to help support this proposal>

Want an inside look at the investigations we currently have under the microscope at Noteworthy? Sign up here: