THE GAA HAS announced it has cancelled a number of tickets for the All-Ireland SFC semi-final between Dublin and Tyrone, which were being sold above face value by online vendors.

Tickets for the eagerly-awaited contest quickly sold-out after they went on sale yesterday, before touts began advertising them at extortionate prices on sites such as Seatwave and Ticketmaster.

“The GAA can also confirm that is has cancelled a number of tickets for the upcoming GAA Football semi-final meeting of Dublin and Tyrone on August 27,” a statement released today by the Association read.

“Requests have also been made directly to platforms selling tickets above face value to remove them from sale and the situation continues to be monitored by the GAA’s ticket office. 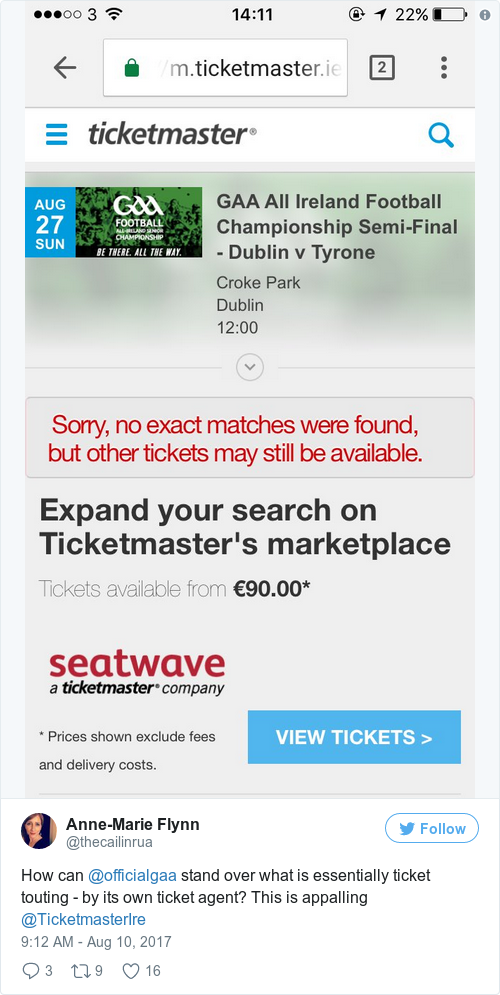 How can @officialgaa stand over what is essentially ticket touting – by its own ticket agent? This is appalling @TicketmasterIre pic.twitter.com/PKwsOITbFD

“Supporters and members are urged not to buy tickets from unofficial sources for above face value as they risk purchasing tickets that may be cancelled.”

The GAA also confirmed that stand tickets for Sunday’s All-Ireland hurling semi-final double-header involving Cork and Waterford (senior) and Cork and Dublin (minor) at Croke Park are expected to sell out.

‘Sure I wouldn’t come at all only we’re playing Tipp!’: Cyril Farrell recalls Croker chat with Tony Keady
Farewell to a legend: Galway hurling great Tony Keady passes away aged 53