GARDAÍ INVOLVED IN the dramatic rescue of Don Tidey, an IRA kidnapping victim, have been honoured almost 40 years after the event.

Garda Gary Sheehan and Army Private Patrick Kelly were fatally shot by an armed IRA gang during the operation at Drumcroman Woods, Derrada in Co Leitrim on 16 December 1983.

Supermarket executive Don Tidey was held captive for 23 days after being kidnapped outside his Dublin home as he took his 13-year-old daughter to school.

Garda Commissioner Drew Harris said: “In all of your actions during this search operation you strove to protect the life of Mr Don Tidey and the lives of your fellow Gardaí.” 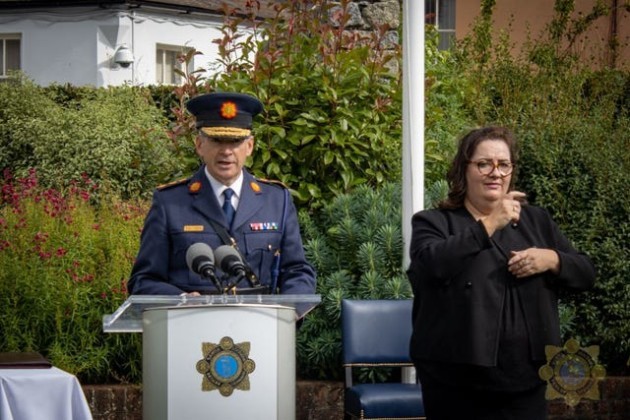 “Each one of you demonstrated outstanding bravery and physical courage, and both bravery and courage involve so much more than we can know,” he said.

“Yes, it is knowingly facing danger, but it is also knowing when and how to act to deliver a positive policing and societal outcome.

“And the dedication to duty and bravery you demonstrated on 16 December 1983 remains an example to all of us who continue to serve, and that kind of skill is required in our work today more than ever.

“And on behalf of An Garda Síochána, I wish to express my deepest gratitude to you all for your service.”

The Scott medal is awarded for the “most exceptional bravery and heroism involving the risk of life in the execution of duty”.

Jennifer McCann, the younger sister of Sheehan, said his killers, who were never brought to justice, still have his death on their conscience.

She said: “Gary did not die in vain and for that we are very grateful.

“We are happy that Mr Tidey has had all this time with his family.

“We have chosen over the past 38 years to remember the happy times we had with Gary. To become bitter would have been a betrayal. 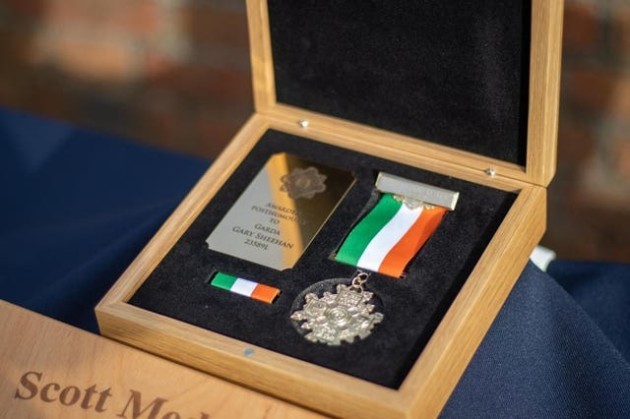 The Scott Medal, the highest honour in An Garda Síochána, was awarded to 15 deceased and serving members of the force at the ceremony today.

John Somers, accepting the award on behalf of his father Detective Inspector William Somers, said it was a miracle his father had survived the fateful night.

“I saw the bullet holes in his jacket, his elbow and his boot and they were taken away the next day for evidence,” he said.

“That was a long day. At the time, there was no mobile phones, so myself, my family and my mum were quite worried when we heard that there was a soldier and a policeman down. It was only until he came home and actually answered the door, we realised he was still alive.”

He added: “He was in shock but he was delighted to be alive.

“He actually shouldn’t have been alive. We were just talking to Don Tidey about it. Three of them were sprayed from close range with armalite. My dad was hit and spun on the ground, and got up and ran into the ditch. Even he says now, they shouldn’t have made it.”

Somers’ father was the first Garda on the scene to find Tidey.

“He actually put a gun to Don Tidey’s head and said ‘identify yourself’, because he had the beard. He said ‘do you not recognise my accent?’ and my dad said ‘Yes, I’ve got the big fish’,” he said.

Det Insp Somers was fired upon during the operation, and John believes the trauma of that night stayed with his father for the rest of his life.

“I asked him ‘What was your last thoughts dad?’ and he said ‘the family’.

“He thought he was going to die” he said.

“I think it aged him over the years. But as dad said, it was the job. That’s what you did. You absorb it and you move on. But of course, it does take its toll and I think it did shorten his life.”

The Scott Medal is the highest award that can be bestowed by the Commissioner & is awarded for 'most exceptional bravery and heroism involving the risk of life in the execution of duty.' pic.twitter.com/OhiEiRsp5x

Asked about meeting Tidey again, John said it was “electric”.

“I’ve seen my dad and himself meet before. Actually, as I went up I saw him touch [my dad’s] medal. So, it’s very emotional. It’s fantastic that he’s here. These people gave up their lives and in some cases nearly died in the quest to free him, and it’s nice to see them all being acknowledged. It’s just taken a bit too long,” he said.

Walter Rice, a retired assistant Garda commissioner, was among those shot at during the rescue.

“At that time we heard a car roaring down. We assumed it was a patrol car because we understood the roads were blocked off,” he said.

“But as it approached us, it opened fire. Literally out the window, they opened fire with automatic weapons. As I reacted, I had a revolver, I opened fire, just to put them off. I kept firing until I knew there was no more danger to us.”

He slammed those responsible for the violence that unfolded that day.

He said: “The people that committed the atrocities, what are they? Common criminals, they had nothing to lose. Certainly, as far as I’m concerned, they were no freedom fighters.

“No freedom fighter would tie up a man and keep him like a wild animal for weeks on end. Shooting an unarmed Garda. Those people didn’t choose to be there. They were there because the State sent them to look for Don Tidey.”

He said that despite the delay, it was a “great honour” to be awarded the Scott medal.

He added: “For some of us, you’re trying to put the memories to the back of your mind and you try to forget them.

“I suppose for some families, you know, it never really goes.”