THE DEADLINE FOR ‘retrospective vetting’ comes up at the end of this year and gardaí want to make sure that everyone that needs to be vetted to work with children or vulnerable people complies with the process.

Since April 2016 legislation has made it mandatory for people conducting relevant work to be vetted.

Anyone whose work, or voluntary activity, consists mainly of the person having access to children or vulnerable adults is required to be vetted.

People who help out on an occasional basis do not fall under the act and are not required to be vetted. 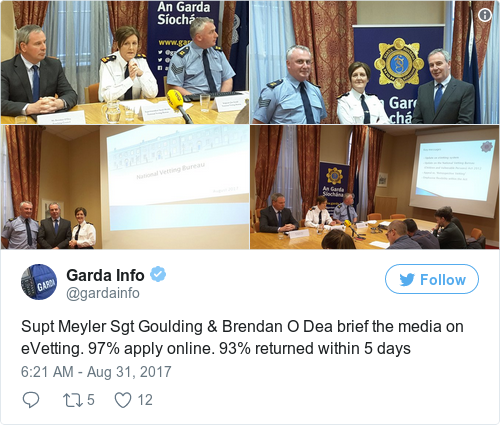 The vetting bureau has a number of compliance officers who carry out unannounced visits of businesses and organisations to ensure the law is being followed.

“There is a cohort of persons who were employed in relevant work before the act commenced and this is the cohort to whom retrospective vetting applies,” Garda Superintendent Sarah Meyler explained.

Retrospective vetting can take place until the end of the year, after which the person will be committing an offence if they haven’t engaged with the process.

The National Vetting Bureau (Children and Vulnerable Persons) acts stipulate a range of penalties for failing to comply.

These penalties can include fines of up to €10,000 and five years in prison.

“We are appealing to organisations, those who maybe haven’t started their plan to move their retrospective vettings on, that they would do so now because that deadline is looming,” Superintendent Meyler continued.

There’s still plenty of time, there’s the capacity there to do it. But start moving quickly now to get those vetting applications into us.

Brendan O’Dea of the Teaching Council of Ireland explained that over 80,000 of the country’s 97,000 primary and secondary school teachers have been vetted.

The remaining teachers who have yet to be vetted are long-standing employees who haven’t moved school in some time.

“Our experience of the new system is that it’s quick and the turnaround is fast,” Mr O’Dea said.

We’ve ironed out an awful lot of issues and made it work even better and we believe we’ll have an all-vetted register of teachers by the end of the year.

Superintendent Meyler also appealed to the 61 organisations still using paper based applications to transfer to the online e-vetting system as soon as possible.

The vast majority of organisations have already made the switch and 97% of vetting is now conducted online.

Switching to the online service reduces vetting times from up to five weeks to just five working days.

The vetting bureau has received over 240,000 vetting applications this year.

It expects that number to reach 500,000 by the end of the year as September to December are always the bureau’s busiest months.

READ: Gardaí investigating death of man found unconscious beside Grafton Street in early hours of morning>
READ: Investigation launched after a man was shot in a field in Offaly>