OVER THE YEARS in GIY, we’ve always avoided trying to get people to sign petitions for this and that on the grounds that we want to be an organisation that is “for things” and positive rather than against things and negative.

I’ve always been sceptical about their potential to achieve anything, and I much prefer the idea of encouraging people to actually do something, you know like grow some food, rather than sign a petition, which mainly seems a bit pointless to me. I’m about to change tack somewhat, but in my defense the petition I am about to ask you to consider signing is very much positive. It is positive about life on our planet and the resource that sustains that life: soil.

My whole view of soil has changed significantly the more years I’ve invested in growing my own food. I used to think about it as just a dirty brown medium in which I sowed seeds or planted seedlings. If anything I battled against it and resented it for how weedy and uncooperative it could be. 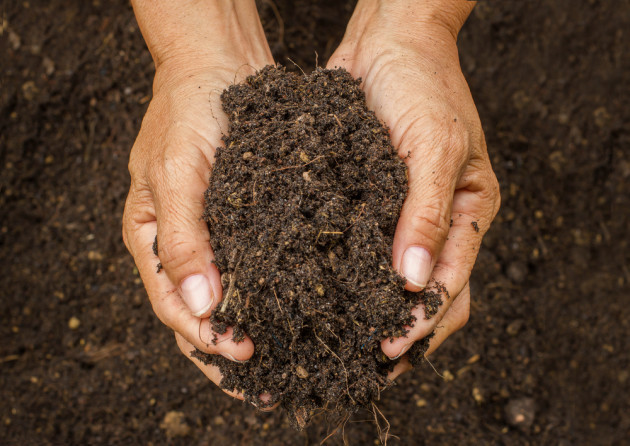 70% of our planet is made up of water and the remaining 30% is land. It is on this land area that soil forms, a perilously thin skin that supports all life on the planet. Without healthy life-giving soil we would have no trees (and no timber) and no habitat for billions of our fellow creatures (a single gram of healthy soil contains millions of organisms).

We would lose the vital service that soil provides in filtering our water to make it pure and prevent flooding, and the vital role it plays in the carbon cycle. Above all, without that tiny layer of fragile top soil, we would lose 95% of our food. Put simply, without soil we have no future as a species.

Soils form slowly – about 1cm in 500 years. This is bad news in terms of its renewability, particularly when you consider how quickly we are degrading or irreversibly losing our soils through intensive agriculture, urbanisation, overgrazing and pollution. Soil can effectively be looked on as a non-renewable resource and it is estimated that we are losing it at a rate of 75 billion tonnes annually.

Incredibly, there is no legislation at EU level that directly addresses soil protection similar to those in place for air and water. So this is where this petition comes in, organised by the People4Soil initiative, a pan-European network of NGO’s and environmental groups. This petition will not just sit on a website somewhere, gathering names and then come to naught.

It’s an official European Citizens’ Initiative, which is our right as European citizens to recommend EU legislation. To trigger this we need to get 1 million signatures from 7 different member states of the European Union which will then trigger an invite to the European Commission to propose legislation to protect the soil.

Protection for soils at European level would see the government here have to assess the condition of Ireland’s soils and take action to protect them. To play our part in Ireland, we need to gather a relatively paltry (considering the importance of the issue) 8,250 signatures by September 12th and we’re only about half way there. Sign the petition here and when you’re finished, go to the place you call your veg patch (whether that’s your balcony or your patio, in your garden or at the allotment) pick up a handful of soil and whisper your thanks to it.

The Basics – How to Save Tomato Seeds

If you had a variety of tomato that was a particular success this year, why not try saving the seeds from the tomatoes to grow next year’s plants? Save seed from open-pollinated varieties of tomatoes only, and not hybrids.

When saving seed, think Darwin, theory of evolution and selective breeding – you want to replicate only the strongest of tomatoes. So only save seeds from the very biggest and best of your tomatoes. The tomatoes you select should be ripe but not overripe.

Cut the tomato in half and squeeze the contents (seeds, gel and juice, not flesh) into a cup or container and label the cup with the variety of tom. Half fill the cup with water. After a few days a mould will form on the water which is a sign that the seed coating has dissolved. The mould will also kill off any seed-born diseases that may be in the seed.

Pour off the water and any floating seeds (these are duds that won’t germinate). The good seeds should be on the bottom of the cup. Rinse the seeds under a cold tap in a very fine mesh strainer (like a tea strainer). Put the seeds in a single layer on a paper plate (or an ordinary plate with some kitchen roll on it). You want them to dry quickly.

Leave for a few days. Bag them up in a labeled envelope and store them somewhere cool (or refrigerate) until next spring.

Recipe of the Week – My Go-To Tom Sauce Recipe 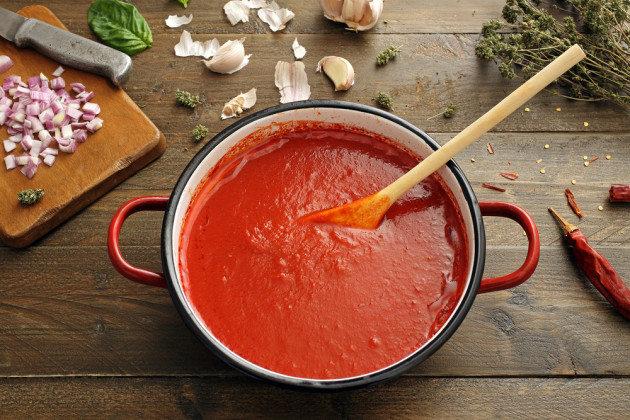 We’re in full-on tom glut territory at the moment, and so it’s time to pull out the old tomato sauce/ passata recipe. We get bags of this sauce into the freezer from where they can be plucked in the dreary winter months to form the base for soups, stews and casseroles, pizzas and pastas.

It’s designed to be quick and straight-forward and I don’t pay too close attention to how much of each ingredient goes in. Just bung them into a baking tray, season and add some oil. Bake in the oven, then blitz, cool and freeze. Simple.

Pre-heat the oven to 180 degrees Celsius. Take whatever excess toms you have. Half (or quarter them if very large) and put them into an appropriate sized baking tray. Use several trays if you have a large quantity.

You are aiming to fill the base of the tray but leave enough room to add the other veg. Roughly chop the courgette and onion and add to the tray. Roughly mash the garlic cloves and add them to the tray with the herbs. Season well and add a good lug of oil.

Mix it all together with your hands to coat the veg in seasoning and oil. Put in the oven and bake for 45 minutes to an hour. Allow to cool completely.

Blitz with a hand blender to a smooth, saucey consistency (or leave a little chunkier if you prefer). Bag up into freezer bags and put in the freezer.

Michael Kelly is founder of GIY and GROW HQ.