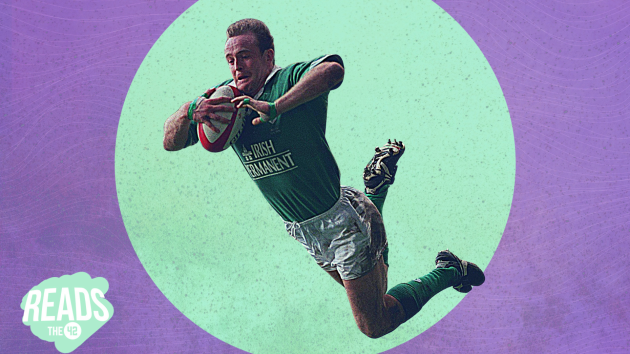 Already ahead, France scythe through the Irish defence on the counter-attack in the 45th minute and as Marc dal Maso gets the ball on Ireland’s 10-metre line, he looks a certainty to finish under the posts. With the conversion to follow, les Bleus will lead 23-7 and be confident of seeing this one home.

But then Denis Hickie has his say.

Hurtling out of nowhere to get himself in front of dal Maso on Ireland’s five-metre line, Hickie launches himself under the France hooker’s legs and he knocks on over the tryline just as Brian O’Driscoll arrives on the scene.

“That tackle by Den was the catalyst for our success in 2000, no doubt,” says O’Driscoll, who would go on to complete a very famous hat-trick in Ireland’s 27-25 victory.

“Marc dal Maso scores there and I don’t think we come back and win.

“Technique went out the window with it but that’s what you need in certain instances. If Den thought about trying to make a proper tackle there, del Maso would have scored. You can be the best tackler in the world but defence is about desire and intent as well.” 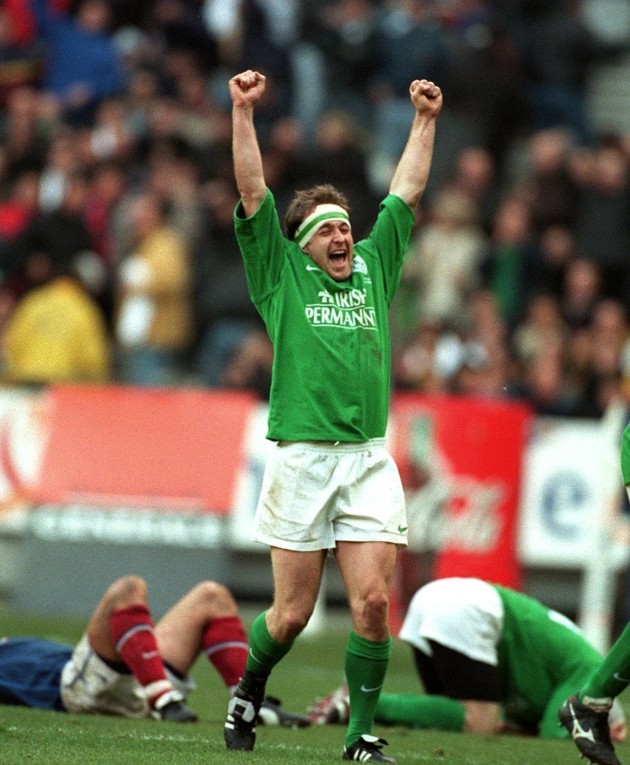 Hickie celebrates in Paris in 2000.

Toulouse in the Heineken Cup quarter-finals, 2006. Leinster are already out in front but the French side have just kicked a penalty to draw back to within five points.

Again, Hickie chooses his moment masterfully. A wild passage of play produces a turnover in the Leinster 22. Guy Easterby and Felipe Contepomi flash the ball wide to Hickie.

The left wing pushes down the accelerator and burns past two Toulouse forwards, exchanges passes with Gordon D’Arcy and then sprints outside Vincent Clerc from 22 metres out, diving into the left corner to finish.

“It looked like Den was an U20 guy playing U15s rugby such was the gas he showed,” says O’Driscoll, who also scored that day.

“It was something else, with the whole lot of us standing in our own 22 cheering, out on our feet. That typified him too – the engine still to go, the decision-making, and the quality of pass. It said an awful lot about that ability to stay in the fight.”

Defining a rugby career in mere moments is unreflective of all that has gone into it but those moments do also give us a refined insight into what Hickie was capable of producing.

These two efforts in France are illustrations of the quality Hickie provided in a playing career that many felt he cut far too short when opting to retire at the age of just 31.

Brian O’Driscoll, Keith Earls, and Tommy Bowe have nudged ahead of Hickie’s 29 tries on Ireland’s all-time try-scoring list since he hung up his boots, but Hickie had a better strike rate than any of them.

Across his 62 caps, Hickie scored an average of 0.47 tries per game, which is second only to Jacob Stockdale’s 0.57 among Ireland’s top 10 tries scorers.

Who knows how many more Hickie might have added if he had played on for longer? He had retired by the time Ireland and Leinster finally tasted real glory with a Grand Slam and Heineken Cup in 2009, but he wasn’t forgotten by those who played with him.

Hickie’s name doesn’t always come up when people are discussing Ireland’s best players but he belongs in that category. While others lifted trophies and picked up winner’s medals, Hickie was part of the journey towards those successes. 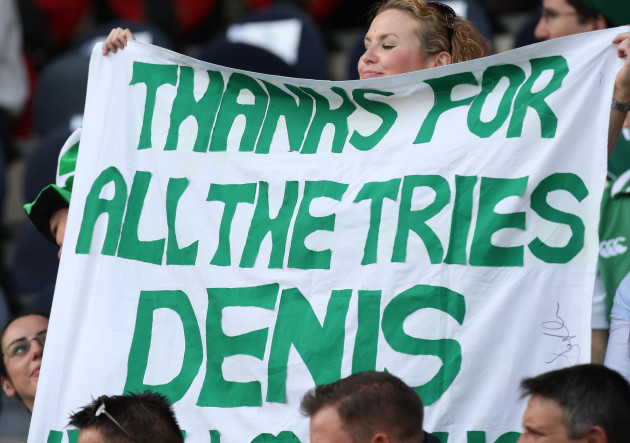 Hickie was born into it. His father, Tony, played in the back row for St Mary’s, Leinster, and the Barbarians and had a final Ireland trial but missed out on an international cap.

His uncle, also Denis, won six Ireland caps in the early 1970s and was part of the last Irish team that had won in Paris before that day in 2000.

Rugby was certain to be part of his life, but Hickie refined his natural speed with Metro St. Brigid’s Athletics Club. He was crowned U15 All-Ireland champion in the 100 metres in 1991 and could have gone on to be a top sprinter.

By 1994, he was captaining St Mary’s College to the Leinster Schools Senior Cup and playing for the Ireland Schools team. Two years later, having also played for the Ireland U21s, he got his first senior Leinster cap away to a Genoa President’s XV.

Hickie’s first Ireland cap came in 1997 at the age of 20, when he scored a try against Wales in the Five Nations. Though it took Irish rugby a few years to get to grips with what being professional really involved, Hickie was a serious trainer from the start.

“In the gym, he’d always look to work out with the forwards and try to match his strength with us,” recalls Shane Byrne, who played with Hickie for Leinster, Ireland, and the Lions.

“He never quite got there, maybe he passed out some of the forwards, but he was by far and away the strongest back in any province in Ireland.”

When O’Driscoll arrived onto the Leinster scene in 1999, he was similarly struck by Hickie’s professional attitude.

“In the early years, a lot of us liked a good time and don’t get me wrong, he did too, but I think he was able to marry the professionalism a little bit better than some of the rest of us,” says O’Driscoll, who remains a good friend of Hickie’s today.

“He was always in great shape, he was a big trainer, he turned up on big days for us, and he brought a real rugby intellect and a general intellect. He’s a very clever guy and very selfless.” 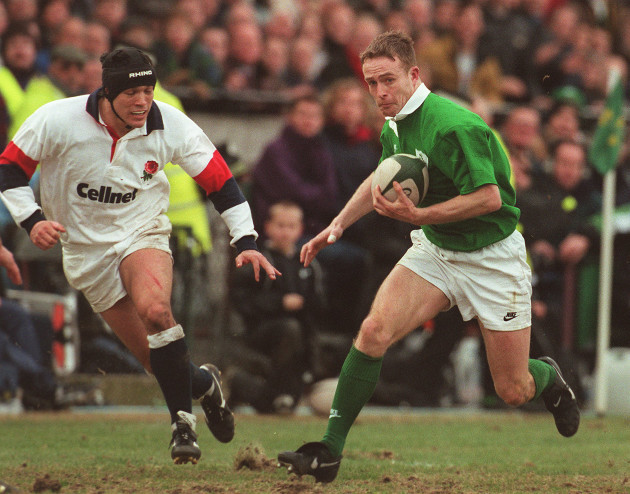 O’Driscoll remembers Hickie being recalled to the Ireland team by Warren Gatland for the 2000 Six Nations game against Scotland when Ronan O’Gara, Peter Stringer and a few others got their debuts.

A 24-year-old Hickie, who hadn’t played Test rugby since 1998, spoke to the team about how he was willing to forego his own individual focus for the betterment of the collective.

“There was always a real maturity to him,” says O’Driscoll. “Even now, I would use him a lot for counsel. I value his opinion because I know it’s so well thought through and he’d look at all angles.”

Team-mates appreciated how there was always more to Hickie than rugby. Music is a major passion in his life and he even guest-hosted the Waiting Room show on RTÉ 2FM once in 2006.

Byrne and O’Driscoll say he was a thoughtful, kind team-mate and also has a sharp sense of humour. Hickie needed to be able to laugh at himself when his infamous Wavin Pipes ad hit Irish TV.

“That was brilliant,” says Byrne. “He was the first one really to get a nationwide ad on the box. Every single thing we could possibly think of in any meeting, Wavin was brought into it.”

O’Driscoll adds that the slagging is ongoing.

“I remember him trying to sell it to us and I just had to stop him. I was in convulsions laughing when I saw it for the first time.”

Whatever about his off-pitch endorsements, Hickie had pure ability as a rugby player, much of it founded on his athletic prowess.

“He had speed to burn and his work rate was immense,” says Byrne. “He really had a great nose for the tries, turned up in the right place and could be physical when he needed to be. He had all the attributes to be the great finisher he was.” 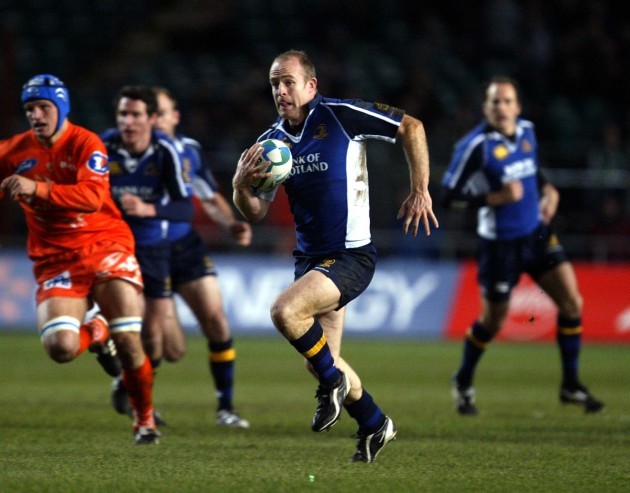 There were some sublime scores over the years from Hickie, including the aforementioned effort against Toulouse and another for Ireland versus Australia in 2006 when he beat four defenders in the space of five metres.

“Get him the ball one-on-one with anybody and he would cause them serious headaches,” says O’Driscoll of playing alongside Hickie.

“You can be the most agile defender in the world but there’s nothing you can do to defend pure speed. You’d also be trying to run support lines off him because he was always going to suck in defenders and create space.”

Hickie’s only major trophy success with Leinster was the 2001 Celtic League final win over Munster, but Byrne flags how good the wing was in Europe – particularly the back-to-back wins over Leicester in the 1999/00 season.

Hickie was a key man for Ireland at the 2003 World Cup, scoring three tries in their first three pool games before rupturing his Achilles tendon in the memorable win over Australia and missing the quarter-final defeat to France.

There were many questions about how Hickie would come back from such a serious injury, particularly given his speed, but he bounced back impressively and had returned to the Ireland team by the 2004 November Tests, going on to secure a place on Clive Woodward’s doomed 2005 Lions tour.

“He got stuck on that damn midweek team and just couldn’t get out of it no matter what,” says Byrne, who played in the three Tests against New Zealand.

O’Driscoll was the tour captain – his Test series was cut very short, of course – and reckons he only trained properly with Hickie just once due to Woodward opting to completely split the squad into two.

The low point was Woodward coming to Hickie in the week of the second Test and telling him he had an important role to play. The Irish wing’s hopes rose, only to be crushed by Woodward telling him the Lions needed his good humour to keep squad spirits up.

Later that year, injury struck again as Hickie dislocated his right fibula and subsequently had a battle to regain his Ireland spot after the emergence of Andrew Trimble.

His exploits with Leinster made it impossible for Eddie O’Sullivan to ignore him, however, and Hickie had established himself as a first-choice wing again for the 2007 Six Nations, in which he won his only silverware as an Ireland player. 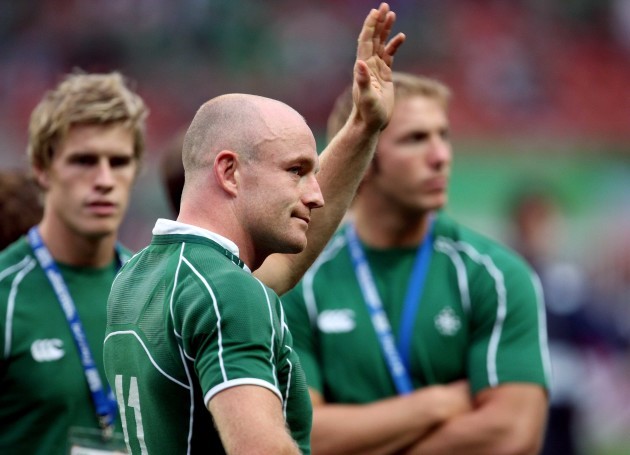 It was a Triple Crown, although it would have been a Grand Slam but for Vincent Clerc’s late, late winning try for France in Croke Park in the second round.

Hickie was still playing excellent rugby that year but leading into the World Cup, he reached a decision to retire after the tournament in France. The hope was to go out on top, having helped Ireland into a first-ever semi-final or maybe even better, but things veered horribly off plan for O’Sullivan’s side.

Hickie’s final Ireland cap came on the harrowing occasion of the defeat to Argentina that consigned them to a pool-stage exit.

“Ultimately, it wasn’t anything like a farewell that someone of his quality deserved,” says O’Driscoll.

His body was still in good nick but Hickie resisted any temptation to reverse his decision and finished up at 31.

“We all knew he had more rugby in him,” says Byrne. “Typical him, he stuck by his decision.

“Look at the likes of Keith Earls now, winger-wise and age-wise, he’s well into the autumn of his career but getting serious kudos for playing superb rugby and Denis missed that.”

Hickie had always maintained focuses outside rugby, completing a degree in Commerce during the early days of professionalism. When he retired, he headed off and satisfied his yearning to travel and see places like South America before returning home to work in the renewable power field initially and more recently with the ATA Group.

Hickie has done some rugby punditry work but doesn’t have, or wish to have, the profile many of his former team-mates enjoy. Yet every single one of them values what he delivered as a player.

Indeed, Hickie was one of the former Leinster men O’Driscoll mentioned after the province got over the line in the Heineken Cup in 2009.

“He was central to the development of the team,” says O’Driscoll.

“But ultimately he didn’t get the kudos that should have come with the success that happened after his retirement.”

For more great storytelling and analysis from our award-winning journalists, join the club at The42 Membership today. Click here to find out more >