HUNDREDS OF THOUSANDS of people applied for Northern Ireland’s £100 ‘spend local’ voucher scheme when applications were opened this week.

All Northern Ireland residents over the age of 18 can apply for the pre-paid card, which comes with £100 credit which has to be spent in shops – but not online – before the end of November.

The goal of the initiative is to boost activity in businesses hit hardest by the Covid-19 pandemic. It’s expected that the programme will cost up to £145 million (€168 million).

Nearly 500,000 people applied for the scheme when applications opened Monday.

Northern Ireland’s Economy Minister Gordon Lyons said “this is above and beyond anything we had expected on the first day.”

“Everyone will have enough time to apply for their card. But the figures so far have been extraordinary,” Lyons added.

Sinn Féin says a similar scheme should be introduced in Ireland before the end of the year.

“Sinn Féin believe that a voucher scheme, similar to that in the north, should be made available,” Imelda Munster, the party’s tourism spokesperson, said.

“We have already proposed a scheme which would provide for a voucher of €200 for every adult and €100 for every child, and we believe that should be rolled out this year,” the Louth TD added.

The Restaurants Association of Ireland has called for a similar programme, asking the government to bring in High Street vouchers or something like the UK’s Eat Out to Help Out scheme 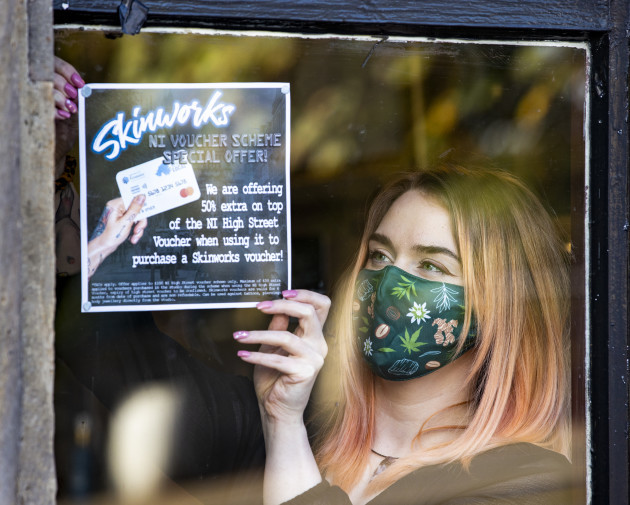 A tattoo studio in Belfast offering 50% extra off on top of the Northern Ireland High Street voucher scheme.

The ’Eat Out to Help Out’ arrangement allowed people to get a 50% discount at restaurants that were registered with the scheme.

“Such an initiative for hospitality must be considered for the Republic of Ireland to support the sector once the staycation season ends in September,” the restaurant industry group said.

Despite the huge popularity of the initiative in Northern Ireland, other stakeholders aren’t convinced it would work in Ireland.

Dublin Town chief executive Richard Guiney says the programme introduced in Northern Ireland is “a little bit basic” and a similar effort in Ireland would fail to offer a significant boost to towns and city centres.

The business group instead proposes a scheme where people pay a sum of money to secure a voucher with a higher face value than what they paid. Guiney suggests paying €100 for a voucher worth €250.

He says this method would help the State claw back some of the cost of the scheme in value added tax (VAT) and it would also encourage people to return to city centre stores.

“I think the purpose has to be to encourage people back into towns and cities. So, if you just give people a €100 voucher which is accepted by, for example, the large grocery stores, all that will happen is that people will just subsidise their groceries for a week and it doesn’t really change the mentality,” he said.

I think you need to be focused and a bit more strategic, rather than just spending money that’s not going to give a return to the State.

Guiney says that cities are struggling to a greater extent than out-of-town stores and shopping centres. He argues that any potential voucher scheme should focus on getting people back into the habit of spending in these areas, which were worst hit during the pandemic.

The comments were echoed by Hillary Hamilton of Bridge Street Books in Wicklow Town. Hamilton said, if a scheme was introduced, it should be aimed at supporting independently-owned shops in towns and villages and not merely become a fill-up for large chain stores and supermarkets.

“It’s the towns that are the places that need to have the heart put back into them, for everybody,” Hamilton told The Journal.

“That’s the way I think it would be the most beneficial to do it. To give it to towns and to people who have suffered the most. Everybody went to the supermarkets anyway, they all did quite well during the lockdown,” Hamilton added.

The bookstore owner expressed admiration for the scheme in place in Northern Ireland but voiced doubt over whether a similar initiative will be introduced in Ireland.

“I think it’d be a wonderful thing to do but I really think it’s such a pie-in-the-sky idea that they do it down here,” she said.

With the budget fast approaching, those sentiments will surely be music to the ears of the Minister for Finance Paschal Donohoe.

When quizzed about the Northern Ireland scheme, Donohoe kept his cards close to his chest but hinted that it’s far from the top of his budget shopping list.

“Always happy to look at any ideas, particularly in the run up to the budget, and I’m sure that idea will be put to me. I’m not going to be ruling anything in or out on budget day because if I do it for one item I’ll have to do it for everything else,” Donohoe told The Tonight Show on Virgin Media.

“But there’s an awful lot of spending already going on in our economy at the moment and if we were to do something like that, we’d have to ask, is it really adding to new spending that’s taking place in our country,” the finance minister added.