IN THE END, it all came down to one kick.

Absolute and utter heartbreak for Ireland, as their World Cup qualification dream came crashing down in Parma, in the most devastating of circumstances.

The permutations coming into this one were endless, but amazingly, it all hung on one Scotland kick in the end. The last of the game, at the very, very death.

After the electric Chloe Rollie’s last-gasp try levelled matters just after Ireland were reduced to 14 due to a yellow card, all eyes were on replacement out-half Sarah Law.

Score, and Scotland’s qualification dream lives on. Miss, and Ireland’s does.

And so, Scotland head to the last-ditch repechage ahead of next year’s World Cup in New Zealand. Adam Griggs’ Ireland go home empty-handed; tries in each half from Linda Djougang and replacement Lindsay Peat, and excellent kicking from Stacey Flood simply not enough on the night.

Ultimately, that opening-day shock defeat to Spain came back to haunt Ireland, as they fell to a rare loss to the Scots to round off a tournament to forget.

Both sides went into this crunch showdown with unchanged starting XVs, and so many qualification hopes riding on the 80 minutes of rugby ahead. A win of any sort, or a draw, would keep Ireland in the running. Italy, who were in the driving seat for the automatic qualification spot, watched on nervously from the stands, having beaten Spain 34-10 earlier. 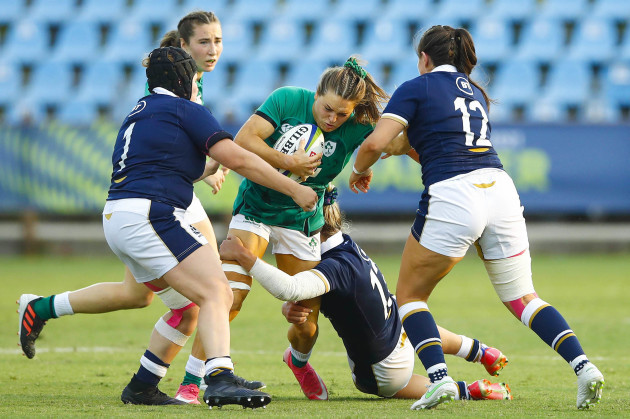 Ireland’s Beibhinn Parsons comes up against Leah Bartlett and Lisa Thomson of Scotland.

A frantic opening period saw Ireland apply some early pressure, though they failed to make any real strides. That was to be the theme for much of the first half; they were wasteful in the ’22, with handling errors and decision-making letting them down.

There were positives, though: they dominated as a really physical contest developed, the line-out was much improved, and Flood’s kicking was top-class for the most part.

As they settled, they worked through the phases, with some big carries in between, and got into decent attacking positions. Scotland did so too, efficient in Ireland’s half with Harlequins star Jade Konkel their ever-threatening carrier. Likewise, they did their utmost to cut Ireland’s deadly wing duo, Beibhinn Parsons and Amee Leigh Murphy Crowe, out of the game.

Ireland’s patience eventually paid off. They broke the deadlock in the 19th minute as the excellent Djougang crashed over, after a powerful run in which she evaded five tackle attempts with the Scottish defence at sixes and sevens. Djougang’s stunning finish in the corner left Flood with a difficult kick and she failed to add the extras, but Griggs’ side took a deserved 5-0 lead.

Five minutes later, they were reduced to 14 when Edel McMahon saw yellow for a high tackle. Helen Nelson kicked the subsequent penalty, and the game turned into a real battle from there.

Ireland weathered the storm a player down, enjoying a massive moment as they kept a lively Scotland attack out despite being reduced one further when Eimear Considine was down receiving treatment for a head injury. Buoyed by that massive turnover effort led by Cliodhna Moloney, McMahon was welcomed back and Considine headed for a HIA.

Her replacement, Lauren Delany, had an unfortunate knock-on with her first touch, and Scotland earned a welcome platform as the break neared, which they grabbed with both hands.

Hannah Smith was electric off the back of a brilliant scrum, and the move ultimately finished with Rhona Lloyd dotting down after a kick from Nelson. Lloyd’s third try in as many games at this tournament meant it stood 5-8 at half time, Nelson failing to convert.

Considine returned on the restart, as Ireland looked to capitalise on the dominance they had established. Sene Naoupu set the tone with a huge hit on Nelson, whose departure came as a blow for Scotland.

But they soon shook that off, turning the game around as Lana Skeldon hammered home off a maul to make it 13-5 in the 49th minute. Ireland’s decision to go for a scrum in the build-up was a questionable one, the Scots piling on the pressure and heading for the corner. Law missed the conversion, but that didn’t matter.

A much-needed Flood penalty reduced the gap to five in the early stages of a fractured, stop-start second half, and Ireland looked to their bench to drive them home.

After a sustained period of pressure, multi-talented and ever-impressive (and -green at 40-years-old) Peat did just that, bagging Ireland’s second try of the evening just after the hour-mark. The Dubliner timed her charge to perfection, claiming one of the biggest scores of her career after industrious work off a ruck from Kathryn Dane and Naoupu.

Flood nailed the conversion this time arounf, and added another penalty from her trusty boot soon after to make it 18-13.

Simple errors stopped Ireland from killing off the game down the home straight, and Scotland pushed them all the way through a gripping finish. There were no shortage of nervy and nail-biting moments down as the chaos unfloded, Claire Molloy stepping up with some decisive interventions.

Scotland’s hero Rollie threatened, as they huffed and puffed and never gave up.

Eve Higgins saw yellow after upending Lisa Thomson, but there was a let-off and some reprieve for Ireland as she kicked the penalty dead.

Griggs’ side looked like they might just make a great escape and see this one out, but Scotland’s remarkable finish in the dying seconds incredibly swung everything their way.