BUNDEE AKI COULDN’T bear to look as the Lions squad was announced so he left his Connacht team-mates watching it on television and went outside at the Sportsground to cast his eye over the academy players training.

He knew he was in contention, he just didn’t dare to dream and he didn’t know exactly how close he was to joining that small band who have played Super Rugby and also been selected for the Lions.

The academy players did enough to distract him but then all hell broke loose.

He rang his wife Kayla and she was in tears as well. Phone calls were made to New Zealand, messages of congratulations came flying in from all over the world as he drove home.

“We were shedding tears on the phone, when I got home we shed more tears. I told my parents, same thing. To look back at the time I left New Zealand, to now. It’s been great. It’s such an honour to be able to represent the British & Irish Lions.”

One man who wasn’t the least surprised to hear Aki’s name being called out was Robbie Henshaw — his old Connacht, current Irish and hopefully future Lions centre partner.

“No, not all, I wasn’t the least surprised,” said Henshaw, speaking at an Intersport Elverys and Canterbury event announcing details of a competition for young fans to train with the pair.

From the last game he played against England he had a stormer. Definitely, when he gets a run of games that’s when he hits form. From what he has done previously, no surprise in my eyes.”

Their Lions selection is the latest chapter in their shared journey. Henshaw is three years younger and having made his Connacht debut at 19, just three months after leaving Marist College in Athlone, he had two full seasons under his belt and was an international when Aki arrived at the Sportsground in autumn 2014.

By the time Aki became eligible and made his Irish debut against South Africa in November 2017, Henshaw was a seasoned international who had returned from the Lions tour to New Zealand.

There was never much doubt about Henshaw making this Lions squad but Aki’s hopes seemed to fade when a couple of niggling injuries limited game-time with Connacht during the winter and then he was out of favour with Six Nations selection before finally getting the nod against England when Garry Ringrose picked up an ankle injury.

That paved the way for his 31st Irish appearance, all of which he has started and 15 of them with Henshaw, but his red card for a high hit on Billy Vunipola hardly did his Lions hopes much good, not least as he has had no relationship with Warren Gatland up to this. 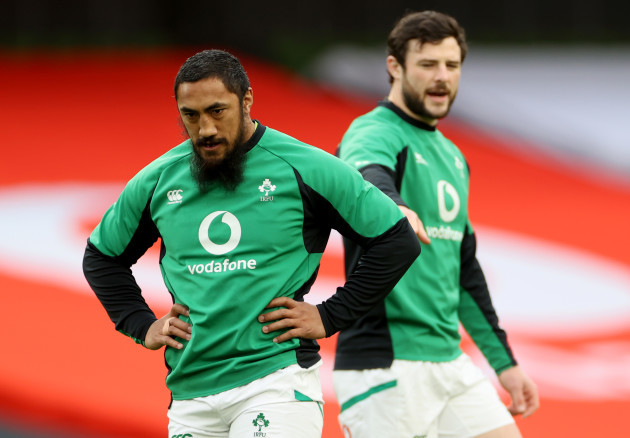 “I only met him once or twice,’ said Aki. “That time they beat us in the Millennium Stadium when he was coaching Wales. I only said hello to him then. Then the second time was when he came to training the week of the England game. Just said hello to him. I haven’t had him as a coach. He spoke to us briefly after the training session, that was it really.”

Aki has no qualms about the red card that day when he became the first Irish player to be sent off twice in an international. “It is part of the law, I am not going to argue with who made the decision. It was the right decision at the time looking back at it. It is the law in the game we have to live by and change the way we play rugby anyway.”

Henshaw was one of the first to congratulate him on his Lions selection and welcome him on board. They had hit it off from the moment Aki arrived in Galway, off the pitch every bit as much as on it.

“That was one of the things Bundee brought, just how important relationships on and off the pitch are key, particularly in close positions, to make sure that myself and himself were always staying in touch about rugby and also having an off switch. It wasn’t just about rugby. We were able to chill out and play PlayStation, just do things outside of rugby.”

I had to watch him play the squeeze-box,” said Aki. “I didn’t realise how talented he was in music.”

Henshaw spared Aki having to learn the accordion that he had been playing tunes on since his grandfather began teaching him when he was six, but he has encouraged Aki on the guitar.

Both have played just once in South Africa, Henshaw on the Irish tour in 2016 and Aki a few years earlier with the Chiefs when they played Super Rugby against the Kings and the Stormers and both are looking forward to going back.

The Springboks haven’t played since beating England in the World Cup final but Henshaw doesn’t think that will have an impact.

Robbie Henshaw and Bundee Aki are pictured together in the official Canterbury British & Irish Lions kit, available from Intersport Elverys stores and at elverys.ie. To celebrate the partnership, Intersport Elverys and Canterbury have teamed up to give young rugby fans a unique chance to train with their respective brand ambassadors, Bundee Aki and Robbie Henshaw. Details on elverysblog.ie on how to enter.