A 53-YEAR-OLD Massachusetts hospital worker stepped forward today to claim the biggest undivided lottery jackpot in US history — a $758.7 (€642) million Powerball prize — after breaking the news to her employer: “I called and told them I will not be coming back”.

“The first thing I want to do is just sit back and relax,” Mavis L Wanczyk told reporters at a news conference.

Wanczyk chose to take a lump-sum payment of $480 (€406) million, or $336 (€284) million after taxes, lottery officials said. Winners who take a gradual payout stand to get more money spread out over several decades.

Even after paying taxes on the winnings, Wanczyk is worth more than some small countries such as Micronesia, which has a gross domestic product of $322 (€272) million, or the Pacific islands of Palau, with a GDP of $293 (€248) million, according to 2016 figures from the World Bank.

The previous evening, she recalled, she was leaving work with a firefighter and remarked, “It’s never going to be me. It’s just a pipe dream that I’ve always had.”

Then she read the number on her ticket and realised she had won.

Wanczyk worked for 32 years at Mercy Medical Center in Springfield in western Massachusetts, she said.

About a month ago, she shared a post on Facebook joking that she needed a vacation. “And by vacation,’” the post read, “I mean I need to move away and find a new job. On a beach. With rum.”

Largest ever on a single ticket 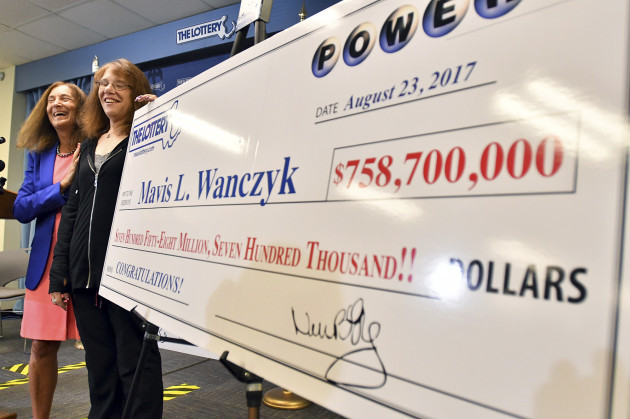 The jackpot is the largest ever won with a single ticket. It is the second-largest US lottery prize, ahead of a $656 (€555) million Mega Millions prize won by three people in 2012. But last night’s big prize is still dwarfed by a $1.6 (€1.3) billion Powerball jackpot divvied up between three winners in January 2016.

Wanczyk has two adult children, a daughter and a son.

Massachusetts Treasurer Deb Goldberg said she offered advice to the family about being careful with their newfound wealth.

“A lot of people will be coming at them with all sorts of things,” Goldberg told reporters.

I highly encourage them to find very, very good lawyers and advisers and think very, very carefully about how they are going to manage their assets.

The announcement that a winner had come forward came after a turbulent morning in which lottery officials initially misidentified not only the shop that sold the winning ticket, but the town.

But shortly before 8am, the lottery said it had made a mistake, and that the winning ticket was sold at the Pride Station & Store in Chicopee, about halfway across the state.

Massachusetts Lottery Executive Director Michael Sweeney said officials were manually recording the names of the retailers that sold the winning ticket and transcribed it incorrectly.

Sweeney issued an apology for the confusion created by the error, but said lottery staff remained thrilled that a jackpot winning ticket and two $1 million (€847,000) winning tickets were sold in Massachusetts — one of those at the Watertown location.

Mike Donatelli, a spokesman for the Pride Station & Store in Chicopee, said the shop was notified shortly before 8am that it had actually sold the record jackpot ticket.

Sweeney said the store will pocket $50,000 (€42,000) for selling the jackpot winner. Bob Bolduc, owner of the Pride store chain, said the proceeds would be donated to local charities.

Read: ‘The Irish took to it straight away’: Looking back at 30 years since the National Lottery began