A fleet of helicopters, airboats and high-water vehicles confronted flooding so widespread that authorities had trouble pinpointing the worst areas. Rescuers got too many calls to respond to each one and had to prioritise life-and-death situations.

Harris County Sheriff Ed Gonzalez used Twitter to field calls for assistance for those trapped inside homes, attics and vehicles. Among those seeking help was a woman who posted: “I have two children with me and the water is swallowing us up”.

Inundated with requests in this area. One of the hardest hit. Can any of our partners help? Cc: @houstonoem @CNPalerts RT @KHOU: https://t.co/DBMdX3PdbT

Officials urged people not to crawl into attics but to get on top of them. The Coast Guard advised people to wave sheets or towels to draw attention to themselves. 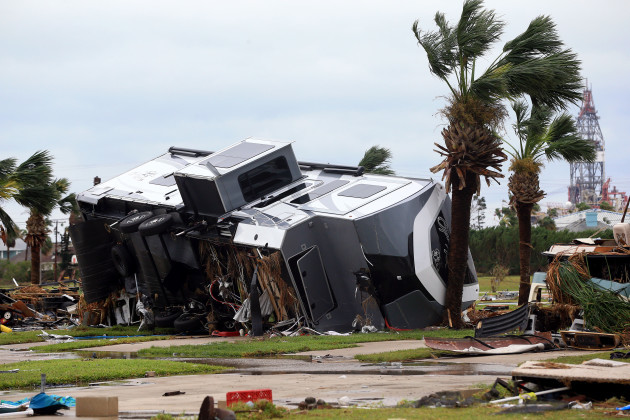 Houston Police Chief Art Acevedo stood in waist-high water during a livestream post on Twitter. “But it’s Texas,” he said. “We’ll get through it.”

Rainfall of more than 4 inches per hour resulted in water levels higher than in any recent floods and higher than during Tropical Storm Allison in June 2001, said Jeff Linder of flood control district in Harris County, which includes Houston.

In Friendswood near Houston, authorities asked people with flat-bottomed airboats or fuel for them to help rescue people, KPRC-TV in Houston reported Sunday morning.

In Houston, dump trucks and city buses were used to ferry residents to higher ground.

A Catholic priest has used a kayak to get from his home in southeast Houston to higher ground and hoped to say mass for people stranded on the streets.

Father David Bergeron said that he tried to buy some wine for Mass at a shop but couldn’t because sales are prohibited in Texas on Sunday before noon.

Bergeron told television station KTRK that: “this is how America was evangelised — by canoe”.

He says that he is praying for people affected by Tropical Storm Harvey.

The Coast Guard, which received more than 300 requests for help, deployed five helicopters and asked for additional aircraft from New Orleans. 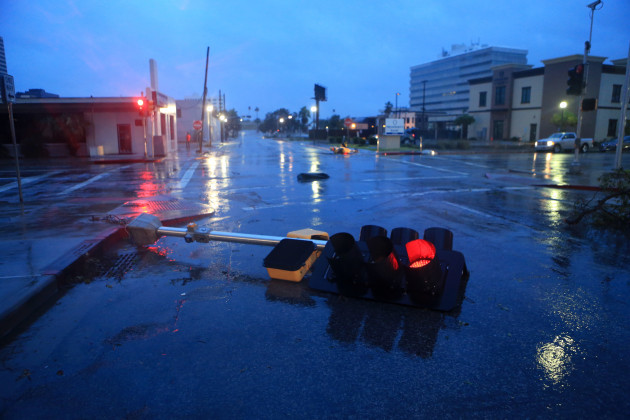 The director of the Federal Emergency Management Agency, Brock Long, said the government expected to conduct a “mass care mission” and predicted that the aftermath of the storm would require FEMA’s involvement for years.

This disaster’s going to be a landmark event.

The rescues unfolded a day after the hurricane settled over the Texas coastline. It was blamed for killing at least two people and injuring up to 14.

Anxiety ran high throughout the region between Corpus Christi and Houston because some of the areas with the greatest hurricane damage were inaccessible to rescuers. And the forecast for days of steady rain threatened to inundate the region’s flat landscape with as much as 40 inches (100 centimeters).

“I will be going to Texas as soon as that trip can be made without causing disruption,” the president posted on Twitter. “The focus must be life and safety.”

In the island community of Port Aransas, population 3,800, officials were unable to fully survey the town because of “massive” damage. Police and heavy equipment had only made it into the northernmost street.

“I can tell you I have a very bad feeling and that’s about it,” said Mayor Charles Bujan, who had called for a mandatory evacuation but did not know how many heeded the order.

Some of the worst damage appeared to be in Rockport, a coastal city of about 10,000 that was directly in the storm’s path. The mayor said his community took a blow “right on the nose” that left “widespread devastation,” including homes, businesses and schools that were heavily damaged. Some structures were destroyed. 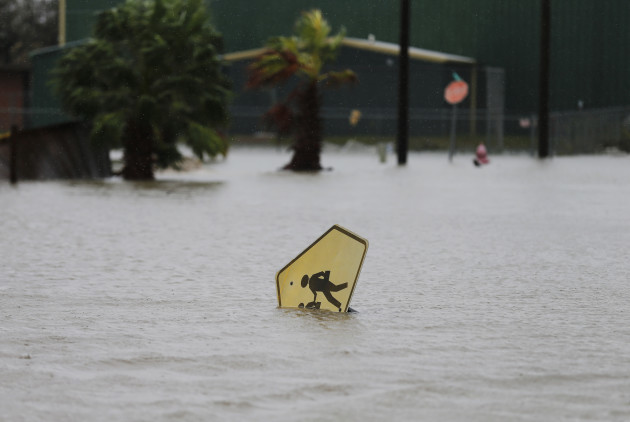 Rockport’s roads were a mess of toppled power poles. A trailer blocked much of one major intersection. Wood framing from ripped-apart houses was strewn along Route 35 on the town’s southern end.

Harvey’s relentless wind tore the metal sides off the high school gym and twisted the steel door frame of its auditorium.

One person was killed in Aransas County when in a fire at home during the storm, county Judge C.H. “Burt” Mills Jr. said.

Another person — a woman who tried to get out of her vehicle in high water — died in flooding in Harris County, where Houston is located, , though authorities had not confirmed a cause of death, said Gary Norman, a spokesman for the Houston emergency operations center.

As many as 14 people suffered minor injuries, including slips and falls, scrapes and a broken leg, Mills said.

About 300,000 customers were without power statewide. Gov. Greg Abbott said it would probably be several days before electricity is restored.

“The streets are treacherous”

Meanwhile, the storm was barely moving.

In Houston, authorities pleaded with people not to leave their homes as a flood emergency was declared.

Elsewhere in the storm’s immediate aftermath, the Coast Guard had rescued 20 people from boats and barges in distress, said Capt. Tony Hahn, commander of the Corpus Christi sector.

The Corpus Christi port was closed with extensive damage. Because the city is the third-largest petrochemical port in the nation, the agency will be on the lookout for spills, Hahn said. 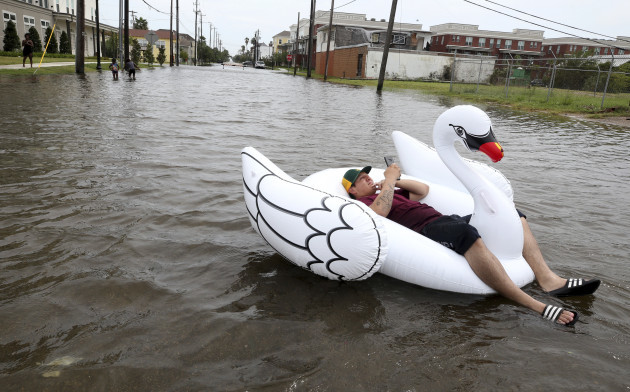 The fiercest hurricane to hit the U.S. in more than a decade came ashore late Friday about 30 miles (48 kilometers) northeast of Corpus Christi as a mammoth Category 4 storm with 130 mph (209 kph) winds.

Harvey weakened to a tropical storm by midday yesterday.

By 7am this morning, Harvey was centered about 65 miles southeast of San Antonio, with maximum sustained winds of about 45 mph (72.42 kph), according to the National Hurricane Center, which described the flooding as “catastrophic.”

Harvey came ashore as the fiercest hurricane to hit the U.S. in 13 years and the strongest to strike Texas since 1961’s Hurricane Carla, the most powerful Texas hurricane on record.

The governor urged more people to flee, but Houston officials recommended no widespread evacuations, citing greater danger in having people on roads that could flood and the fact that the hurricane was not taking direct aim at the city.

The last Category 4 storm to hit the U.S. was Hurricane Charley in August 2004 in Florida.

Read: ‘Catastrophic, life-threatening’: Hurricane Harvey is battering Texas but is beginning to slow down