FORMER IRELAND FOOTBALL manager Mick Cooke knew he had spotted a real talent when he saw Emma Byrne in action for the first time. 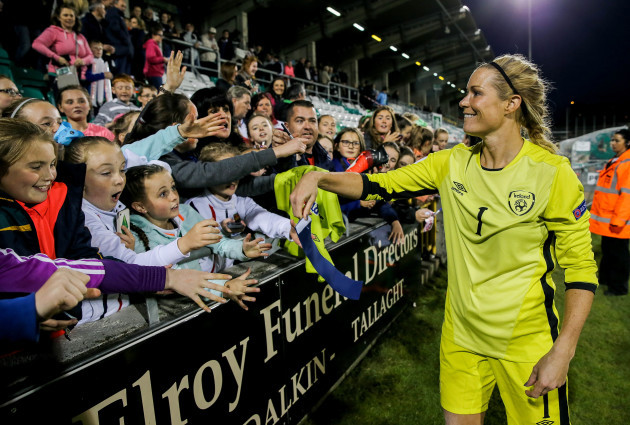 He watched her blossom at underage level, and when the time was right, he added her to Ireland’s senior squad.

Her height was an obvious asset, but Cooke could also see that her days spent playing gaelic football added some good athletic attributes to her development as a player.

And when the Irish goalkeeper of the day Sue Hayden announced her retirement in 1996, Cooke knew he had an ideal replacement to call upon.

“When I brought her into the underage system,” he told The42, ”it wasn’t long before she made her way into the senior set-up. She was a fantastic athlete and she deserves everything she has got in her career.

She was a great goalkeeper to work with, everybody enjoyed working with her. She was very professional and that’s why she has lasted so long in the game.

“She came into replace a very famous goalkeeper in Sue Hayden and it was obviously a big decision to give Emma her chance. She was doing very well at underage, we had won the Dana Cup and the Gothia Cup which were underage tournaments.

“She shone in those two tournaments very well and obviously we brought her into the senior squad for training. She just progressed gradually. She deserved her chance and I think the longevity of her career probably proves it was right to give her that chance.”

Byrne would later go on to earn a total of 134 caps for Ireland across an international career spanning two decades. She also captained the side from 2013 until she announced her retirement recently. 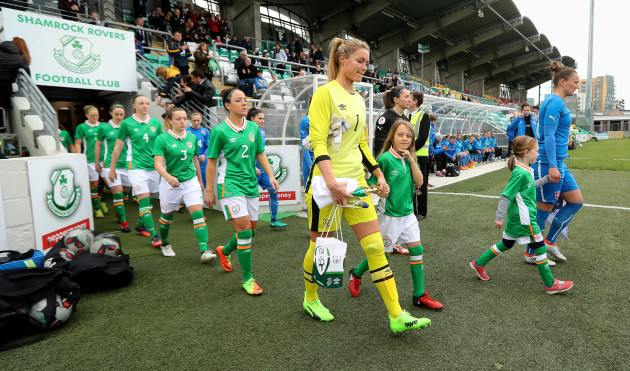 Emma Byrne leading the Irish team out onto the pitch ahead of a friendly against Slovakia earlier this year.

Ireland international Áine O’Gorman was 16 when she made her first appearance for Ireland, and when she first joined the squad, Byrne was among those who helped her assimilate into the group.

The Kildare native was already showing leadership qualities at that stage in her career, and O’Gorman could see she was the obvious candidate to succeed the former captain, and Arsenal teammate, Ciara Grant.

“I think it was a natural progression. Ciara was a good leader on the pitch aswell and Ciara and Emma were good friends at the time, so it obviously was the end of an era and a turning point.

“But it was a natural progression with all of Emma’s experience that she would take over the captain’s role.

I’d say she leads by example a lot. She was quite relaxed in her approach but would have always worked very hard. She was a great leader on the pitch from the back line, organising the back four and making sure that everyone was doing what they were supposed to be doing.

“She led by doing and if she felt she needed to say something, she’d step up and say it.”

Specific coaching for goalkeepers was all but non-existent during Cooke’s time with the Irish women’s team, meaning that aspiring players like Byrne were forced to learn the craft on the fly.

But as Cooke recalls, she had all the right qualities to thrive in the position regardless.

“In my days, there was no distinctive goalkeeping coach at any level of football. It’s only in the latter years now where coaching has gone to another level within the game and goalkeeping coaches are being employed in a full-time capacity.

In my day, we sort of learned from goalkeepers themselves. Certainly, Sue Hayden passed on a lot of her experience to Emma in training. She was a quick learner after not being in the team for so long only that she did learn so quickly.

“She improved herself over time as well and she demanded that she be worked hard.”

Recently, Byrne’s leadership as a player was called upon off the pitch when the Irish women’s team took a stand against the FAI in relation to claims about poor player treatment.

The 38-year-old made reference to it in her retirement statement, in which she said, ‘thank you to the PFAI, SIPTU, the FAI and the Irish media for making my last battle a successful one.’

As a result of their resilience in that standoff, an agreement was reached with the FAI following lengthy talks.

O’Gorman notes how Byrne’s strength of character came to the surface during those days when the need was greatest. 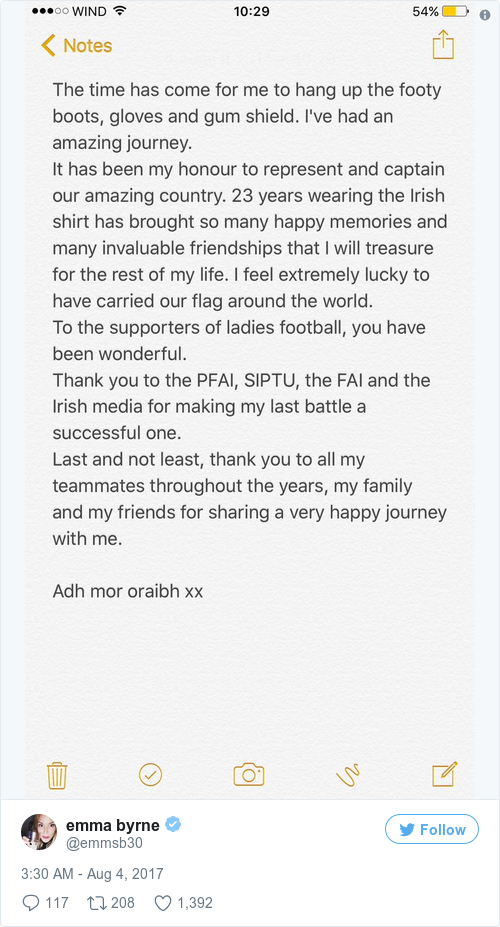 “I suppose in her captain’s role, she was the leader of the team. When you’re in that role, you have to take on a lot of responsibility and she worked for the team. She was the go-to person between all the toing and froing in our negotiations.

As an experienced player in our team we all would have looked up to her leadership. It was a team thing but she had to speak on behalf of the team as the captain.”

O’Gorman would have preferred to see Byrne carry on as Ireland’s number one for a while longer, but she also understands her reasons for making the decision to step aside.

Byrne never made it to a major tournament with the national team, which is an unfortunate footnote on her career, but O’Gorman and the rest of the panel will strive to accomplish that goal after she departs the dressing room.

In any case, the UCD Waves forward will miss all the great qualities that Byrne gave to Ireland’s cause during her 23 years of service.

“We’ll miss her round the place and her influence and experience both on the pitch and off the pitch. And just having her presence around will be definitely missed.”

Who needs the ball? Stoke beat Arsenal despite having lowest-ever 23% possession
Limerick pick up huge win against Bohs in battle to beat the drop