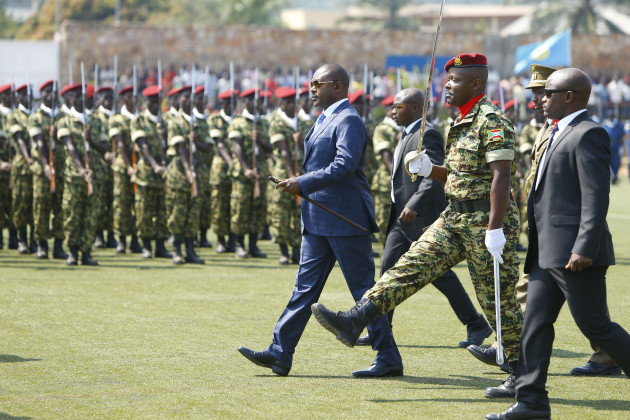 UN INVESTIGATORS HAVE accused Burundi’s government of crimes against humanity, including executions and torture, and urged the International Criminal Court to open a case “as soon as possible”.

The United Nations Commission of Inquiry on Burundi said it had “reasonable grounds to believe that crimes against humanity have been committed and continue to be committed in Burundi”, pointing a finger at “the highest level of the state”.

The Burundi government firmly rejected the allegations, accusing the UN investigators of being “mercenaries” in a Western plot to “enslave African states”.

“They are not investigators but mercenaries paid to reinforce a narrative already in circulation in certain Western reports and pave the way for the ICC, this instrument in the hands of the West to enslave African states,” presidential spokesman Willy Nyamitwe told AFP.

Nyamitwe went further in a tweet, saying investigators were “paid to reach conclusions that were politically motivated and sponsored by the EU”.

Nyamitwe also dismissed the charges, saying they targeted President Pierre Nkurunziza because “he disturbs the hidden interests of westerners” and predicted the allegations “would have no effect”.

The three investigators, appointed by the Human Rights Council last September, described a “climate of fear” fuelled by violations including executions, torture and sexual violence.

Commission chair Fatsah Ouguergouz told reporters in Geneva that the abuses were part of a “general or systematic attack against the civilian population” that could be considered “state policy”.

“We are struck by the scale and the brutality of the violations,” Ouguergouz said in a statement.

Given Burundi’s record of impunity and the “strong likelihood that the perpetrators of these crimes will remain unpunished”, the investigators asked “the International Criminal Court to open an investigation… as soon as possible”.

The ICC would need to move quickly if it followed investigators’ advice to open an investigation: last year, Burundi formally announced it was withdrawing from the court, with the move set to take effect on 27 October.

After that date, the ICC can only open a case if asked to do so by the Security Council.

Burundi plunged into a political crisis in April 2015 when Nkurunziza decided to run for a third term that his opponents said was unconstitutional.

He won elections in July that year which were boycotted by the opposition.

The commission stressed that the total number of violations is nearly impossible to estimate, but chairman Ouguergouz said the cases of torture and extrajudicial killings ran into the hundreds at least.

About 40 women interviewed for the report recounted being victims of sexual violence, he added.

Nkurunziza himself, surrounded by a close-knit circle of “generals”, was behind “big decisions, including ones that led to serious human rights violations” it said.

Armed opposition groups were also responsible for rights violations in Burundi, the report said, noting that these abuses had been more difficult to document.

The investigators were never permitted to enter Burundi, forcing them to conduct their probe from neighbouring countries, where they interviewed more than 500 victims and witnesses.

They said they were drafting a confidential list of suspected perpetrators of crimes against humanity, along with detailed information about the acts they are accused of committing or ordering.

Today’s report meanwhile said that despite a range of abuses against the Tutsi minority, there was currently no evidence of genocide in Burundi, as widely feared.

But the commission said it remained deeply concerned by ethnically-loaded comments made by state and ruling party officials.

Human rights activist Pacifique Nininahazwe urged the ICC to open an investigation “without delay” into crimes committed in Burundi, saying the court cannot shirk its mission to judge these types of crimes.

Burundi went through a civil war from 1993 until 2006 between majority Hutus and minority Tutsis, which claimed an estimated 300,000 lives.

The current unrest has also sparked fear of a wider crisis in Africa’s volatile Great Lakes region, with the 1994 genocide in neighbouring Rwanda having been fuelled by similar ethnic tensions.