IRISH CHARITY CONCERN Worldwide has said it has evacuated staff from a Congolese city as fears mount of an imminent volcanic eruption.

On Monday five people were found dead from toxic fumes from the eruption of Nyiragongo volcano, as strong aftershocks rocked the city of Goma, in the east of the Democratic Republic of Congo.

The deaths brought to 20 the number killed since Africa’s most active volcano erupted on Saturday, spewing red-hot molten lava that engulfed houses in its wake.

The Congolese authorities issued an evacuation order at 3am today to move a large portion of the city’s two million inhabitants away from the disaster zone.

This came on foot of warnings from scientists that a large mass of magma was under the city and the adjacent Lake Kivu, which could erupt suddenly or result in the release of toxic gas.

Concern’s Regional Director Reka Sztopa said that their team in Goma have been evacuated to three locations in Congo and in neighbouring Rwanda.

“Our first priority has been to get people to safety. Once we know how the situation is going to settle we will be able to launch an emergency response from these locations.

“Thousands of people are evacuating by car, motorbike, boat and on foot, creating traffic jams across the city.

“Local organisations are recommending that parents put their phone number on a piece of paper, and put it in their childrens’ pockets in case they get separated.” 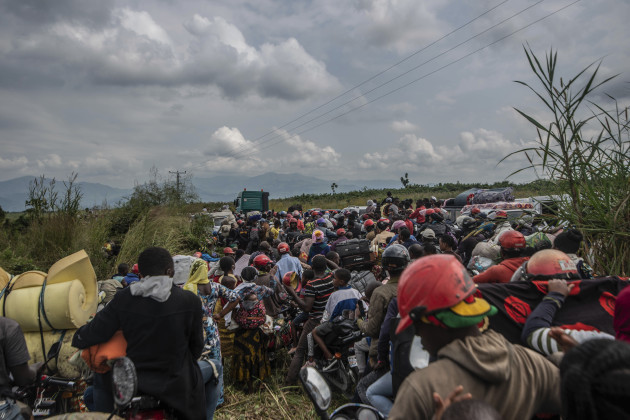 People fleeing from Goma as a warning issued of an imminent eruption.

Mount Nyiragongo erupted on Saturday night, with lava destroying nearby villages and reaching the edge of the city.

Concern have reported that Goma has been shaken by regular earthquakes each day since then, with some buildings collapsing and large cracks appearing in roads.