MAYNOOTH UNIVERSITY STUDENT Emma Kelly is on a J1 in the US for the summer.

She’s working in a restaurant over in Chicago, and didn’t recognise Ireland’s new Taoiseach when Leo Varadkar stepped through the doors at the weekend.

When she realised that it was in fact the head of the government who’d just ordered the shrimp tacos, she decided she’d take a “painfully awkward” picture with the Fine Gael leader. 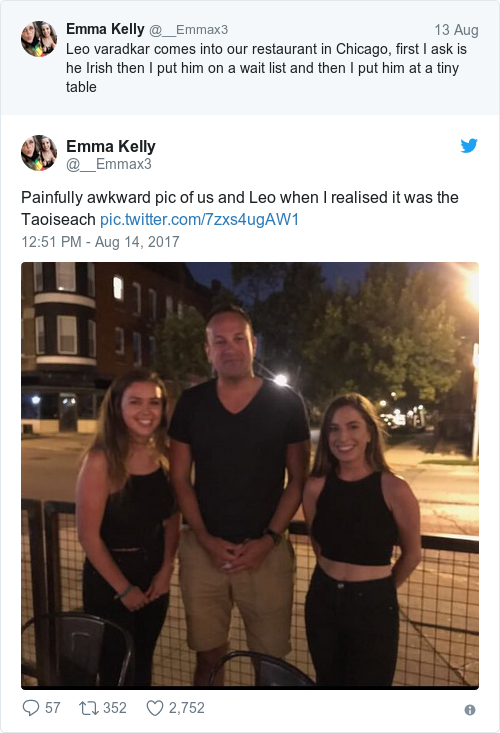 Painfully awkward pic of us and Leo when I realised it was the Taoiseach pic.twitter.com/7zxs4ugAW1

Speaking to RTÉ’s Ryan Tubridy Show this morning, Kelly said she’d been in Chicago for the past two months and was living with a large group of friends.

“I’m a host in a restaurant,” she said. “So when people walk in, I greet them and take them to their seats. I give them water, tell them a bit about the restaurant.”

She said that when Varadkar arrived, she thought he and his companion were “just two normal guys”.

“Half way through the conversation, I realised they were Irish,” she said. “Obviously I was excited because I don’t get to talk to that many Irish people over here.

I told them there was a wait list to sit outside so I sent them to the bar. Then 15-20 minutes later, I brought them out to a tiny two-person table… then [my friend] Emer comes in and says ‘do you know that’s Leo Varadkar out there at the table?’

She then went out to move the Taoiseach’s table and said that he was “really nice about it”.

“He wasn’t too mad we didn’t recognise him, I don’t think,” Kelly said.

When you’re working in Chicago, you’re not expecting someone like that to walk in.

She said that they were moved to another table and that they enjoyed a nice conversation about her J1 and his holiday abroad.

Varadkar saw Kelly’s tweet later on, and sent one back to thank her for the service. 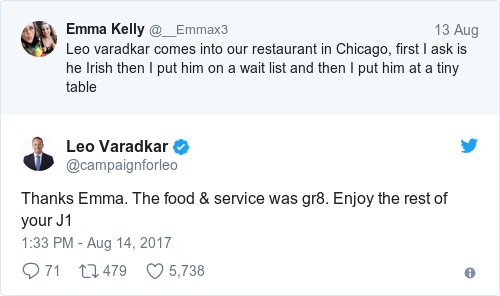 Thanks Emma. The food & service was gr8. Enjoy the rest of your J1

Read: ‘Running for president of Ireland is not something I would do willy-nilly, but we need a contest’

Read: Shane Ross: ‘I was just drinking far too much in my 30s and it was affecting my life in every way’