REPUBLIC OF IRELAND assistant manager Keith Andrews says he still doesn’t know if there was either somebody or some people working behind the scenes against the best interests of Stephen Kenny and the Irish squad around last year’s Videogate affair.

A week after the 3-0 loss to England last November, the UK Daily Mail claimed some Irish players were upset at the political nature of a motivational video and team-talk delivered by Kenny before last week’s defeat to England at Wembley.

The video spliced together previous Irish goals against England along with scenes from Anglo-Irish history.

An FAI statement released to the Mail – and subsequently to other media outlets on request – said they were aware of “issues around content shown to the squad” ahead of the game, and were “already looking into the matter as a matter of urgency in order to establish the facts.”

Damien Duff and Alan Kelly both left Kenny’s backroom staff two months later: Duff is understood to have a number of problems with the FAI hierarchy, with the handling of the videogate affair among them. Kelly, meanwhile, was reportedly upset with the video.

When he first spoke about the incident, Kenny dismissed it as a “non-story”, and in stating he did not believe the story leaked from the dressing room, said that “I think there may be people behind the scenes or elsewhere who want to cause problems for the team or don’t have the best interests of the team.” Kenny has not elaborated on that since.

In an extensive interview with Joe Molloy of Off the Ball, Andrews was asked whether he believed there was a person or people behind the scenes at that time who did not have the team’s best interests at heart.

“I still don’t know, which irks me a lot, in terms of not knowing exactly what happened. I go to the video: I think it was blown out of proportion, I really do. I’m very comfortable with what was shown to the players that night.

“In terms of how it was conducted in the aftermath, was I totally enamoured with that?

“Probably not. I look at my working relationship with Duffer, and I was really sad to see Duffer go. Devastated. It was a horrible time in the aftermath. It was already a tough few months, but that time – dealing with that – and speaking with him, the relationship I’ve had with him, I’m very close to him, I was devastated he left. Really devastated.

“It wasn’t a nice chapter, there’s no getting away from it”, he continued. “It hurt, it wasn’t nice, the spotlight that came on is just something we had to get through. It was a horrible period, one where you’re thinking, ‘this is just unsavoury, it’s clearly not what’s needed.’” 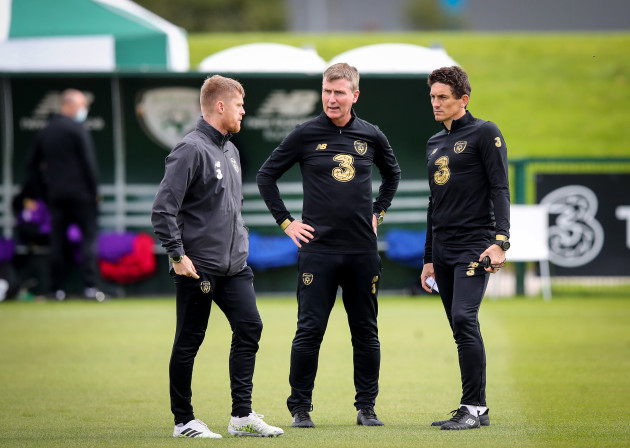 Damien Duff with Kenny and Andrews in September 2020.

Andrews said he had a suspicion as to who the person is, but has not confronted them.

“No. It’s probably not the right thing to do. You know me well, I’m up-front. There is an honesty of how I go about my life full-stop. If I have a problem with you, I would say it to you. I don’t want an argument, but I would just say it to you. And I would expect that in return.  That’s the type of relationships I like in my life. In this particular instance, I don’t know. Which probably makes it worse, and harder.

“Of course it is [rude to confront or accuse] unless you know conclusively it is that person.”

“The wider FAI team is nothing to do with me, in terms of what goes on”, replied Andrews.

“We have been supported a lot, in terms of what we have wanted to do and how we go about things. We know there are financial limitations in terms of where we find ourselves as an organisation. I think the powers that be look at what we are trying to do and what we are trying to achieve, they know the confidence we have in what we’re doing and how we’re going about it and where it will bring us to.

“Overall, the support we have been given has been really really good. With the video, it’s one of those instances where it could have been dealt with a little bit [better.]“

In a wide-ranging interview, Andrews admitted results have not been worse than he anticipated, but issued a strong defence of Kenny.

“He is a visionary, he is a romantic when it comes to Irish football and where he thinks it should be perceived. And I’m very much aligned with that.”

Watch the interview in full here.